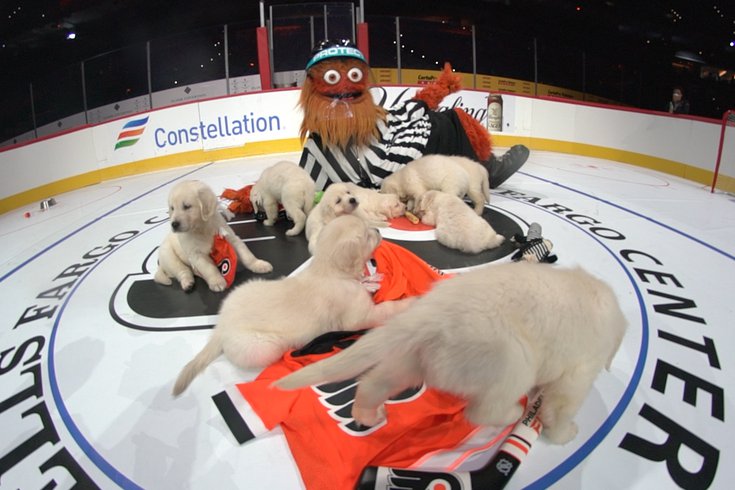 It doesn't appear that Gritty handed out too many penalties to a group of adorable puppies who took the ice at the Wells Fargo Center.

There’s no Stanley Cup Playoffs at the Wells Fargo Center this year, as the Flyers and seven other Eastern Conference teams are competing in Toronto, one of two NHL bubbles in Canada.

But just because the Flyers won’t be playing at home doesn’t mean there isn’t any hockey taking place in South Philly.

While the Flyers captured a 2-1 victory over the Montreal Canadiens on Wednesday to take a 1-0 lead in their first round playoff series, team mascot Gritty was busy refereeing a hockey game played by puppies.

The game, called "Gritty’s Pups on Ice," took place during both intermissions of Flyers game. It was part of the franchise’s second-screen viewing experience for games called "Flyers Home Ice."

The competition was as adorable as it sounds, as each puppy got its own intro onto the ice at the Wells Fargo Center.

After Gritty dropped the puck, the puppies could be seen carrying and chasing after pucks. Gritty petted the puppies and dragged a puck-shaped toy around the ice, a ploy to get the puppies to run around.

The fierce competition and play led to many puppies taking naps on the ice, but it doesn't appear that Gritty handed out too many penalties during the game. The entire contest can be viewed here.

If you missed @GrittyNHL's Pups on Ice during the first intermission, don't worry. It'll be back in the second.

While the boys take break, things are just getting started for @GrittyNHL's Pups on Ice!

This isn’t the only time the puppies will be taking the ice at the Wells Fargo Center. The games, which are part of a partnership with the Philadelphia Animal Welfare Society, are expected to continue during intermissions throughout the Flyers’ first round playoff series.

The Flyers will return to the ice at the ScotiaBank Arena on Friday for Game 2 of their playoff series against the Canadiens.