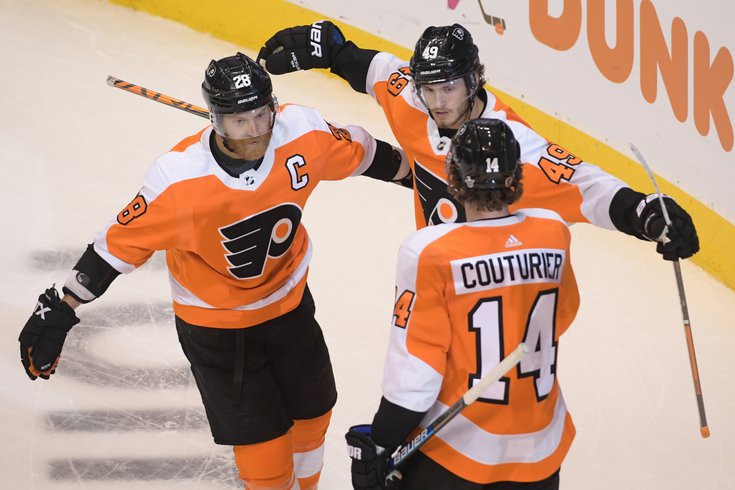 The Flyers continue to impress in the Toronto bubble.

The Flyers picked up right where they left off (after sweeping their seeding games) to open the first official round of the Stanley Cup Playoffs Wednesday night, hanging on to get a 2-1 win over the Canadiens.

Philly didn't play its best game for all 60 minutes, but an outstanding outing by Carter Hart paired with opportunistic scoring and some good luck got the Orange and Black ahead 1-0 in the best of seven set.

On paper heading into the series, Philadelphia had an edge. Montreal, even though they clawed their way into the 16-team Stanley Cup bracket, was the worst team in the bubble, losing nine more games than they won during the regular season (31-31-9). They earned a berth after upsetting the Penguins in the qualifying round. The Flyers allowed 29 fewer goals in two fewer games — and scored 18 more — back before the season was shut down in March. Head-to-head, the Flyers won two of three meetings, both in overtime.

Of course, there's a reason they play the games. Here are three reasons the Flyers prevailed in Game 1 in Toronto:

The Flyers went 0-for-11 on the man advantage during their three otherwise dominant wins in "pool play," but when they got their first chance in Game 1, they made an early statement.

After a minute and a half with control of the puck that would no doubt have had Flyers fans at the Wells Fargo Center shouting "shoooooot," Ivan Provorov decided to fire one from just inside the blue line. He was able to thread the needle through a bunch of traffic to get the Flyers on top 1-0 early.

The above goal was later credited to Jakub Voracek instead.

Heading into the series the Flyers had a special teams advantage they hoped they could exploit, and seeing if they are able to do so will be one of the key storylines on the ice over the next two weeks.

The first period goal was the first for either team on the power play (the Canadiens would follow with their first PP success in the second).

Hart of a champion

If Carey Price and Carter Hart didn't have their respective uniforms on, you'd be unable to tell which one was the 21-year-old, and which was the goalie making his 65th career playoff start.

Hart, who will have a very happy 22nd birthday on Thursday, looked poised, relaxed and completely unintimidated by the situation he found himself in. Some of the circumstances through which he was able to follow the puck and position himself perfectly were downright remarkable. Hart stepped up several times throughout the game making key saves, while also finding himself the recipient of a lot of luck (like the time a potential 2-on-0 rush ended in a Canadien's player wiping out).

That sequence seemed like a good microcosm of this game so far. Canadiens block a shot, get a 3-on-1 going the other way, then a Flyer catches up and the Habs can't even connect on a pass.

In all, Hart stopped 27 Montreal shots, including an onslaught in the second period. His first blemish came off a rebound he had literally no control over, with the Candiens on a man advantage.

A bit more luck would come late in the third period when a potential game-tying goal ricocheted off the crossbar.

The Flyers allowed the fewest shots defensively in the regular season and the Canadiens were second in NHL in shots taken. One of those stats would have to give Wednesday night and the Flyers' defense was able to hold the Habs below their 31 shots per game average (out-shooting them 31-28).

The Canadiens were dynamic in the second, but couldn't replicate that effort in the game's other periods. The shots on goal breakdown:

The shots battle was just one facet of a game that saw no shortage of action, and of horrible mistakes from the Flyers. The team's 14 giveaways provided the Habs with way too many opportunities and the defense had allowed over a dozen high-danger scoring chances in the first 30 minutes of game time. The Canadiens looked faster and often times a little more feisty but the Flyers played with patience and confidence and picked their spots.

Also, how in the world did Price make this save?

The breaks eventually went the Flyers' way. Not long after Montreal got on the board with Shea Weber's power play goal, Joel Farabee said "not so fast" as he took advantage of Price being out of position just 16 seconds later and scored on a deflection to put Philly back on top 2-1 (assisted by Travis Sanheim).

Joel Farabee gets one back, Flyers lead 2-1. pic.twitter.com/dQoNPUNoZ9

The Flyers played very solid defense down the stretch to clinch the 'W.'