Flyers have dominated bubble without a single power play goal 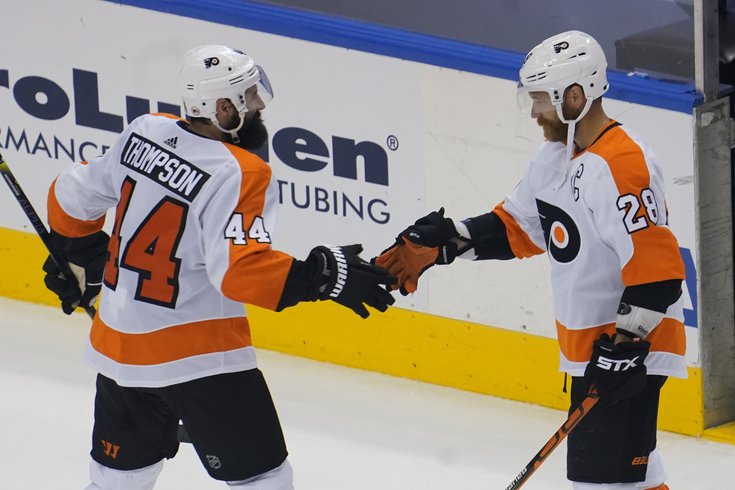 The Flyers are the hottest team in hockey as they begin their first round series with the Canadiens.

The Flyers have won 12 of their last 13 games, dating back to the end of the "regular" season back in February and March.

They have shocked the eastern conference by ascending to the Eastern Conference's No. 1 seed in the Stanley Cup playoffs by handily defeating the top three teams — the Bruins, Capitals and Lightning.

And they aren't even really playing their best hockey.

The Flyers — who, according to TheLines.com, have seen their FanDuel Stanley Cup odds improve from +1000 to +600 over just 10 days — have gotten goals from a lot of different players, but none of them on the team's top line (of Claude Giroux, Jake Voracek and Sean Couturier).

They also, despite having a +8 goal differential (second best in the NHL restart), have yet to score a power play goal inside the Toronto bubble.

Philly has had 11 power play chances in Toronto, roughly four per game, and has come up empty all 11 times. Even to the most casual of hockey fans, it's clear that getting an opportunity offensively with an extra player on the ice is one that has to be taken advantage of, especially in the postseason. It's only a matter of time, at least the Flyers hope, before the unit that scored on 20.8 percent of man advantages (14th best) starts to find its groove again.

"It’s just one bounce away from happening for us," Travis Konecny said, echoing Voracek's claim. "When things aren’t going well with anything, you just try to simplify and get back to the original game plan. We talk a lot about the A-scoring chances or the B-scoring chances, or the A-play or B-play. We’re just going to try to stick with the A’s. Make the simple plays, simple shots and get to the net. That’s when everything else starts to open up. I’m not saying that it’s going to work right away, but we’re definitely going to keep working at it. That’s going to be a big part of our game heading into the playoffs."

Working in the Flyers' favor is the extra days off they've had since beating Tampa for the top seed back on Saturday. The three days off will give the team a chance to rest up, and to focus more on some of the (few) issues they've had since hockey resumed a few weeks ago.

"Our execution is an area that’s been off, which I’ve mentioned a few times that we’ve been working on," head coach Alain Vigneault said a few days ago. "Fortunately, the schedule here is giving us a couple more days. We’re only starting Wednesday, so we will be able to work on the power play. Hopefully we can get it where it needs to be. It’s definitely a weapon during a series. It’s definitely something that we have a lot of confidence in. We’ve been doing well, especially in the twenty games prior to the stoppage of play. I expect us to be able to get back to that form."

Philly's other special teams unit has stepped up, allowing a single goal in 10 short-handed situations (a 90% kill rate). Their soon-to-be opponent Montreal has allowed three short-handed goals in 17 chances so far in the playoffs (during their upset of the Penguins). With the puck, interestingly, they've also gone scoreless (0-for-12).

But the Flyers know with such a small sample size, that really doesn't mean much.

"They work extremely hard," former Canadien Nate Thompson said. "They’re fast. They play a high-speed game. You have Carey Price on the back end there as their backbone. They’re the real deal. They beat Pittsburgh for a reason. They have a good team. We have to make sure we’re ready."

The puck drops for Game 1 just after 8 p.m. Wednesday on NBCSP. The Flyers are -152 consensus odds favorites according to TheLines.com