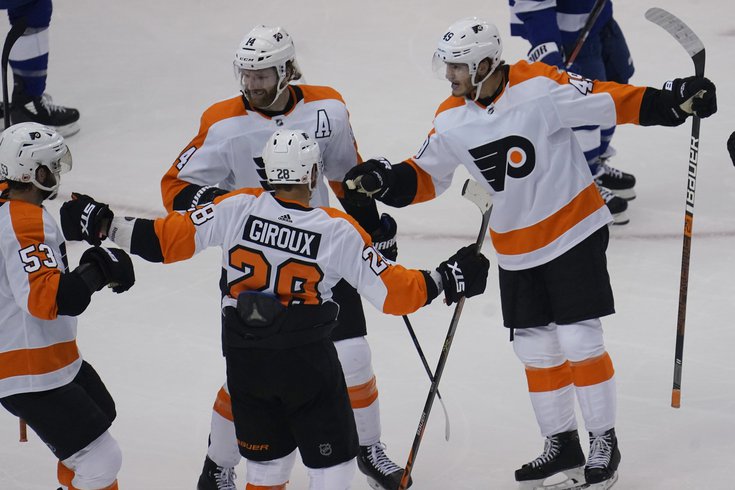 On Wednesday, the Flyers will embark on their first playoff campaign in three seasons when they open their Eastern Conference quarterfinal series against the Montreal Canadiens. It will be the first time in 20 years, however, that the Orange and Black will enter the postseason as the No. 1 seed in the East, a title they earned by sweeping their way through the round robin of these pandemic-altered Stanley Cup playoffs.

Now, following an 11-3 domination of the Bruins, Capitals and Lightning in the round robin, the Flyers are currently tied with the Vegas Golden Knights and Colorado Avalanche for the best title odds in all of hockey.

Let's take a look at the latest Stanley Cup odds from FanDuel, courtesy of TheLines.com.

And now here's a look at their odds in the Eastern Conference, where the Flyers are once again the favorite according to TheLines.com.

For the Flyers, it's been a long climb to the top of their conference, as they found themselves on the outside of the playoff picture looking in as late as January. But then they started to rise, and they did so rapidly, ascending through the wild card spot and into one of the top three spots in the Metropolitan Division. And by the time the season was halted in mid-March — thanks to a nine-game winning streak — the Flyers found themselves sitting just a point behind the Bruins for the top spot in the division.

All along the way, the Flyers have seen their Stanley Cup odds continually improve. Back in February, they were barely projected to make the playoffs, and their odds of winning the whole damn thing were long. As they begin to move up, they saw their odds climb to the +2500 range, and by the time the calendar turned to March, the Flyers were up into the ninth best odds in all of hockey at +1600.

The season was halted about two weeks later, with the Flyers going 3-1-0 over their final four games. And by the time they reconvened for training camp, their odds had improved to +1000 at FanDuel, according to PlayPennsylvania.com. They also saw their odds to win the Eastern Conference jump to +500 just prior to the restart on July 30. At DraftKings, the Flyers were +550 to earn the No. 1 overall seed, something they accomplished with relative ease during the round robin.

And now, their Stanley Cup odds have finally caught up to their talent level.

As for their Eastern Conference quarterfinal matchup against the Canadiens, the Flyers are currently the favorites to win Game 1 on Wednesday night. They're -149 at DraftKings and -165 at FanDuel, per TheLines.com.

Now, they just have go out and handle their business if they hope to bring the city its first Cup in 45 years.