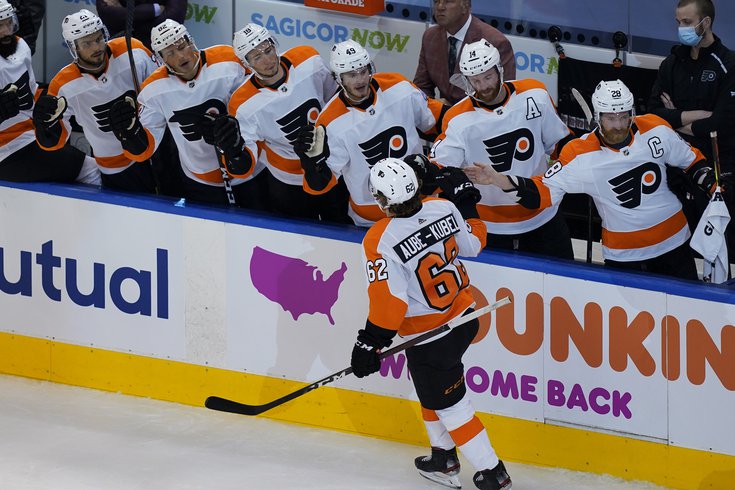 Philadelphia Flyers forward Nicolas Aube-Kubel is congratulated by the bench after his first goal against the Tampa Bay Lightning.

The round-robin games are now over and the playoffs are about to begin for the Flyers, who earned the No. 1 seed in the Eastern Conference by beating the Tampa Bay Lightning, 4-1, on Saturday night in Toronto. With the win, Philly improved to 3-0 in their seeding games, outscoring opponents 11-3 overall along the way.

For the Flyers, this will be their first time as the conference's top seed since 2000.

They may not have been the best team in the NHL, the East, or even their own division for the majority of the season, but the Orange and Black caught fire shortly before COVID-19 ended the regular season back in March — and ever since they resumed play earlier this month, they have shown zero signs of any rust following the nearly five-month layoff. In fact, they may be playing even better than they were back when they were the hottest team in hockey, and the timing couldn't be better as they'll start their quest for the 2020 Stanley Cup in earnest this week when they face the No. 12 seed Montreal Canadiens, who upset the Penguins in their first-round matchup.

So, how did the Flyers get it done against a Tampa Bay team they haven't beaten since December of 2017? Well, much in the same way they were able to dominate against Boston and Washington, the other two top-half teams in the East. Let's examine...

It's been nearly a week since the Flyers' soon-to-be 22-year-old goalie played in a game, so if there was some rust early, it wouldn't have been entirely surprising. But that wasn't the case for Hart, who stopped 23 of 24 shots against the Lightning, including a pair of breakaways in the first. The first came against the Lightning's most dangerous scorer, as Hart stoned Nikita Kucherov just over seven minutes into the game after a Matt Niskanen turnover.

That stop proved to be crucial in more ways than one.

The entire tone of the first period changed after that stop from the young goalie, as the Flyers could've easily been down 1-0. Instead, in addition to buying some time for his teammates to figure things out with a couple of early saves, Hart seemed to energize the entire team with that one and shift the ice completely in the opposite direction. For the first five-plus minutes of the game, the Lightning looked like the sharper team.

And less than a minute later, Nicolas Aube-Kubel scored the first of his two goals (more on that in a minute). The Flyers never looked back from there, and peppered several more shots on Andrei Vasilevskiy in the ensuing minutes.

That, however, wouldn't be the last time Hart sparked a Aube-Kubel goal. In fact, it wouldn't even take another period. Later in the first, Hart was bumped into by Alex Killorn while making a big save. His teammates, naturally, rushed to his defense, and only 30 seconds later provided their goaltender with some extra breathing room.

The two stops early may have been crucial and directly led to a 2-0 lead rather than a 2-2 (or worse) score at the end of the first, but Hart was at his best in the third period, when the Lighting threw everything they had at him down the stretch. He never budged.

Hart may not have faced a ton of shots in this one — thanks in large part to his defensemen blocking 24 shots — but he stopped the ones he needed to. It's hard to overestimate just how good Hart has looked in his first two postseason games, and while this might not be the actual "playoffs" just yet, these performances should give him some confidence heading into their first-round matchup against his childhood idol Carey Price and the Canadiens.

We've already talked plenty about Hart's performance in the Flyers' win over the Lightning, but he was hardly the only young Flyer to stand out in this one.

If Hart provided the defense, the rookies provided the offense on the other end of the ice. Aube-Kubel provided a pair of first-period goals that set the Flyers on their way. The first goal, which came shortly after Hart stopped Kucherov, came on a deflection off a Shayne Gostisbehere shot from the point, the first of two assists for the defenseman.

The second came shorty after on a sweet little back-and-forth with Selke finalist Sean Couturier and proved to be the eventual game-winner.

According to NHL PR, Nicolas Aube-Kubel is the first Flyers rookie with a multi-goal game in the postseason since Matt Read in Game 3 of the 2012 Conference Quarterfinals (2-0—2 vs. PIT). When the dust settled at the end of the first period, Aube-Kubel had tallied six shots, the same number as the entire Lightning team.

But that wouldn't be the end of the scoring for the Flyers rookies in this one. Joel Farabee, making his first postseason appearance in place of Jakub Voracek, scored late in the second period to get Flyers back to a two-goal lead following a power play goal by the Lightning.

Farabee, who also had an assist on Aube-Kubel's second goal, may not have had the game-winner, but this goal might have been just as important. After getting absolutely dominated by the Flyers in the first period, the Lightning looked much sharper in the second, generating the better scoring chances, outshooting the Flyers, and cutting their lead in half.

This goal from Farabee, which had not only a great assist from Gostisbehere but also a sweet secondary assist from Couturier, put the Flyers back up two goals and killed whatever momentum Tampa had built to that point in the second period.

Tyler Pitlick would add an insurance goal on an empty net late in the third.

We've alluded to this in both the previous sections, but it felt like it deserved its own section. The Flyers absolutely dominated the first period, and despite looking out of sorts for the first five-plus minutes, they outshot the Lightning 20-6 in that frame. And after Hart made that save on Kucherov on the breakaway, they outshot Tampa 18-3 over the final 13-plus minutes of the first.

The fast start gave the Flyers the cushion they needed to weather the storm late in the game from the Lightning (no pun intended), who certainly did not roll over in this one, and without it, the outcome may have been quite different.

It's also worth mentioning what you haven't seen in this article — names like Claude Giroux, Kevin Hayes and Travis Konecny. That's because they haven't done much of anything scoring-wise in this round robin. And that may be what makes this Flyers team the most dangerous heading into the elimination rounds: their depth.

The Flyers are getting scoring from everywhere, and eventually those proven vets are going to start scoring again. When that happens ... watch out.