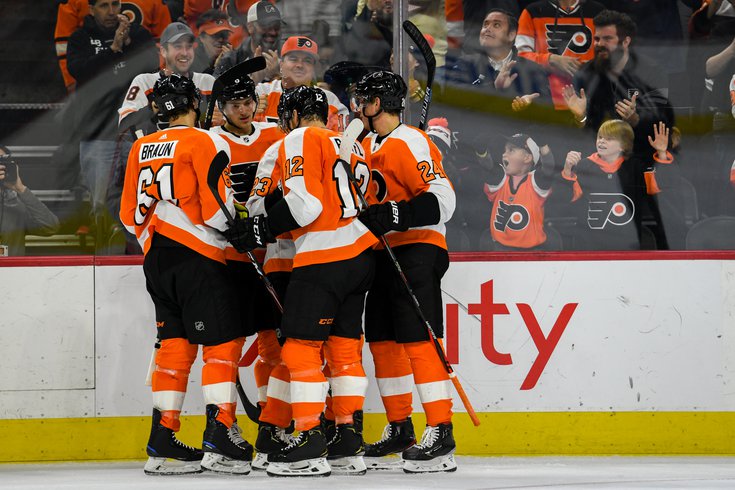 How far can the Flyers go this season?

You really know things are starting to return to normal when absurd expectations are attached to a team. There was always a fine line between being happy your team won and then attaching some ridiculous future to said team, one that if not met, provides nothing but anguish.

“Come on, Shander. I can be happy my team won!”

Absolutely. Yell and scream at the TV in joy. Throw shade on your Twitter friend who roots for the Celtics, or Penguins, or Mets. Do whatever you want to celebrate a 1-point victory over the Spurs or a convincing W over a Rask-less Bruins team. Those wins deserve celebration. But do they deserve the “this team is winning it all” treatment?

You may be surprised to find one of those teams does deserve it. But how you react to them coming up short is on you, not Twitter nor anyone else you want to blame.

The Flyers have a legit shot at representing the East in, and winning, the Stanley Cup Final. They really do. Carter Hart showed no signs of his youth being an issue, standing strong in his playoff debut. The team that gets no love on their own local radio station actually has a realistic chance to bring home a Cup. What that would mean for this city, especially the loyal fans who have sat through decades of the dismissal?

I think the resilience of the Flyers fan would be the first thing recognized after the players on the ice. This is a forgotten fanbase, often trolled by people on their own flagship station. It’s no fault of their own that three guys seem to be the only ones really interested in talking about this team on the radio, and outside of highlights, you get very little discussion on TV. We talk about them on Fox Sports Radio: The Gambler, but even then, it’s through the betting lens. Flyers fans deserve a home where they can find the same level of passion they share about the team.

The Flyers fan has been lied to for years about the sport “not transferring over” to radio/TV/print. Podcasts like Snow the Goalie on Crossing Broad are a perfect example of why this unique fanbase in this city routinely has to search out great content.

Add that to the history of this team failing to find a goalie and falling short in huge moments, like losing to Chicago after a ridiculous run to get there. There is such a long history of being neglected in the city and watching a team fail to bring the Cup back to Philadelphia. It's been painful to watch, mainly because these fans remain loyal, maybe even to a fault.

This would be one of the most memorable championships in the history of Philadelphia sports — without question. What the fans have been through; being pushed to the back burner on every major sports conversation, while remaining loyal to an organization that seemed to be behind every major progressive trend in the game, until about two years ago. Even this year it will be a different reaction than what’s happening with the Phillies and Sixers.

Social media – as awful of an existence as it truly is – has called for mass change with the Phillies. Rightfully so. They were poorly built and have no answers in their bullpen. Outside of scoring nine runs a game, it’s going to be pretty hard to beat anyone good. The Sixers will fire Brett Brown if they don’t make the Eastern Conference Finals, a destination that feels like a far away mythical place. Twitter would be OK with the firing of both Brand and Brown, starting over with… well, the new head coach is a different column.

But does anyone honestly think that even a second-round exit would save Brown? No. Of course not. There is legit anger – which is understandable – when people talk about the Sixers coming up short, or the Phillies giving up another late lead.

The mentality is actually the opposite of what we see with the Flyers, because the Sixers – and Phillies to a lesser extent – get the Eagles treatment. The media analyzes every play and game like it’s a 16-game season. It’s a crazy phenomenon but actually sheds some strong light on how these smaller fan groups within the larger fanbase act. It’s a result of being neglected vs. being catered to in some overkill sense.

Root for the home team, it’s what we do. But if you are putting championship expectations on the Sixers, or simply playoff expectations on the Phillies, take a note out of the Flyers’ fan handbook. Balance your excitement with your disappointment, and maybe we can all learn something from the loyalty shown by decades of Flyers fans.

After doing so many videos with Dr. Shander and being on email chains with medical professionals all over the country, I fully understand and value the impact a mask has on preventing spread. In fact, it’s been a common theme on our doctor show since its inception. So, imagine how surprised I was when some idiots – including some who followed me – accused me of being some “Clay Travis” COVID denier.

Of course, it would take two whole minutes to look at my TL and see the content that constantly pushes information from medical pros, not those denying a pandemic. But that’s life on the internet – can you imagine being a Twitter couple? Arguing with strangers all day, then putting your phone down to argue with your significant other about the same crap you yelled about today.

My crime in their eyes was simple, pushing people with large platforms and blue check marks to do more than simply tweet, “WEAR A MASK”. We covered it for weeks on the Dr. Show: which masks, how to wear them, how spread can run through a football field. By asking people to further inform their audiences, people in those very same audiences accused me of, well, something that’s virtually impossible with the content I create.

I bring this up because of this tweet and video. This very sad fact that we are seeing countless individuals continue to improperly wear a mask, most notably on their chin. If you think jumping on Twitter and attacking/shaming someone into wearing a mask – as they should be doing but refuse for whatever reason – is going to magically cause them to wear a mask, I’m selling a bridge from Camden to Philadelphia.

Much like people who commit dumb mistakes should be allowed to grow, we should start educating people who believe what we do – wearing a mask – but be more informative about the “why” and avoiding unnecessary cases. Twitter isn’t the place to change other people’s minds, but could work to help further educate the echo chamber.