Are the Flyers dangerous in the bubble? Experts say yes 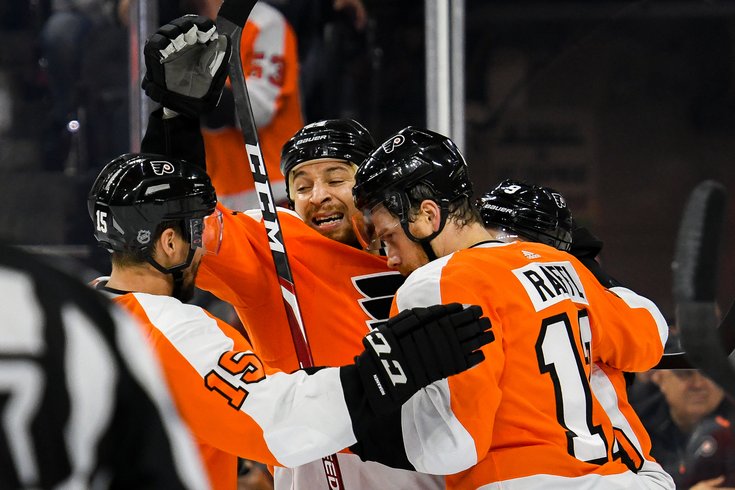 Chris Stewart (44), Michael Raffl (12) and Matt Niskanen (15) celebrating a goal during the Philadelphia Flyers game against the Vegas Golden Knights at the Wells Fargo Center in Philadelphia on October 21, 2019. (Kate Frese)

Just like that, in the sweeping wave of the COVID-19 pandemic, it went away. It shouldn’t be forgotten that the Flyers were the hottest team in the National Hockey League on March 12, when the NHL decided to “pause” its season.

Prior to the break, Philadelphia had won nine of its last 10 games and 10 of its last 12. The Flyers carried a 41-21-7 record during the truncated regular season, good for 89 points, one point behind the Metropolitan Division-leading Washington Capitals.

Apparently, the Flyers have built enough momentum to make some believers out of the NBC NHL crew who will be bringing hockey to the sports-hungry masses over these next two months.

Pandemic or no pandemic, the Flyers have the shadow of postseasons past following them. The last time they won a playoff series was in the 2011-12 season, when they reached the Eastern Conference semifinals, losing to the New Jersey Devils 4-1.

Under first-year coach Alain Vigneault (through 69 games), the Flyers were on their way to their best season since 2010-11, when they finished 47-23-12 (103 points) and were swept by Boston in the conference semifinals.

When the league stoppage occurred, the Flyers were giving up an NHL-low 28.7 shots a game, a stark difference from last year when they permitted opponents an average of 32.5 shots a game, which put them No. 22 in the NHL.

The Flyers surrendered 280 goals last season, 29th in the NHL. This year, that’s dropped to 191, which was eighth in the league.

Add the amazing return of Oskar Lindblom from cancer, it’s hard not to be optimistic about the Flyers’ Stanley Cup potential this summer.

“I’m excited about Philly’s chances,” NBC analyst Patrick Sharp said. “They’re a team that when they’re clicking on all cylinders, going back to February and March, they were the hottest team in the National Hockey League. They have a well-deserved bye in the first round, if you want to call it that.

“I think Oskar is going to give them a little inspiration as well, with the three-year contract and being around the guys again. That’s been an inspiring story to everybody across hockey.

“It’s a matter of recapturing that hunger to me (as a team). The Flyers were a team that when I watched them play, their bottom six forwards really had an impact on the game. Every night, it was one of those guys chipping in with a goal; being tenacious on the forecheck, being good on the penalty kill in the final minutes of play.

“It takes a lot of pressure off the big boys in Philadelphia, and we know who they are. Philly is a dangerous team, but I need to preface that by saying I don’t know what’s going to happen coming out of this thing. It’s a whole new season.”

Former Flyers’ goalie and NBC analyst Brian Boucher places part of the Flyers’ success on goaltender Carter Hart, who will turn 22 this month.

“Carter Hart is going to be a great goaltender in the National Hockey League; the question will be can he perform right here, right now?” Boucher said. “That’s the big question. If he can, there’s no reason why Philly can’t feel like they should be a team that could do it.

“It’s a fair question mark. I think he’s going to be a great goaltender. It’s just that he’s 21, 22 years old. We’ll see how it plays out. The Flyers should feel just as confident as any team in the Eastern Conference.”

Boucher also stressed the importance of Vigneault, who guided the Vancouver Canucks (2010-11) and New York Rangers (2013-14) to the Stanley Cup finals.

“Don’t discredit Alain Vigneault and what he’s been able to do,” Boucher said. “Accountability is huge. Respect in that room is huge. I’m not so sure it was there with the prior staff. Alain Vigneault comes in and guys respect him.

“They know he’s been in the league a long time. He’s been to the Stanley Cup a couple of times. Guys know that this is a guy who means business. He holds them accountable, which is important.”

Eddie Olczyk, who will be doing the games with Hall of Famer Mike “Doc” Emrick from remote locations, says “Regardless of whether this was April or August, the Flyers are a very dangerous team.”

The former goaltender says the difference was bringing in Braun and Niskanen to solidify the back end. They’ve taken some heat off of Ivan Provorov, who struggled last year.

“The year before that, Provorov was sensational,” Olczyk said. “I think I said one time doing a couple of Flyer games in a short period that this guy was moving and playing like a Norris Trophy winner here. That’s how good Provorov was two seasons ago. Then, last year, well, it happens.

“General manager Chuck Fletcher brought in a staff of veteran guys behind the bench that you can’t underestimate. That staff has a ton of experience. The one thing with Alain Vigneault’s teams, in my opinion, for the most part have always overachieved. I think there is something to that.

“You look at how consistently his teams in Vancouver played. They always were prepared and they always seemed to play a little bit better or a little higher on the totem pole than people thought they could. That starts with AV. It’s going to be really interesting to see the Flyers.

Philly plays its first meaningful game Sunday at 3 p.m. (on NBC), facing the Bruins in their first round robin seeding game.

Joseph Santoliquito is an award-winning sportswriter based in the Philadelphia area who has been writing for PhillyVoice since its inception in 2015 and is the president of the Boxing Writers Association of America. He can be followed on Twitter @JSantoliquito.