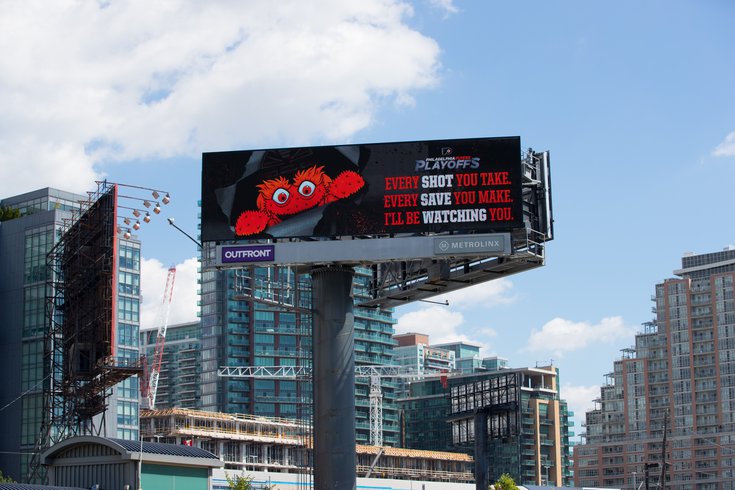 Gritty will be ever-present in Toronto in billboard form as the NHL attempts to restart its season this week.

The Philadelphia Flyers have officially arrived in Toronto, Canada for the resumption of the 2019-20 NHL season after being off for over four months due to the COVID-19 pandemic.

The Flyers beloved orange mascot, Gritty, will not be in attendance to support Philly when they take the ice in the NHL’s Eastern Conference bubble in Ontario. But he will be there in billboard form.

The Flyers have purchased a billboard along the route to and from Scotiabank Arena in Toronto featuring Gritty saying “Every shot you take, every save you make, I’ll be watching you.”

Along with providing encouragement to the Flyers, Gritty’s billboard will surely be an unpleasant sight to the eleven other Eastern Conference teams.

While the Flyers are playing hockey north of the border, Gritty will be confined to the Wells Fargo Center for watching games.

As the Flyers left for Toronto this past Sunday, Gritty climbed to the roof of the Wells Fargo Center with a telescope to find the team’s plane as it took off from Philly and waved goodbye.

Gritty said that he already misses the team, but that they’re expecting their mascot to take care of things in Philly while they’re gone.

I miss you already


Hold it down in Philly, Gritty.

The Flyers will begin their quest for their first Stanley Cup title since 1975 and first Finals appearance since 2010 on Sunday afternoon when they face off against the Eastern Conference-leading Boston Bruins.

The team will then take on the Washington Capitals next Thursday and the Tampa Bay Lightning next Saturday as part of the Eastern Conference’s four-squad round-robin to determine the top four seeds for the Stanley Cup Playoffs. The Flyers are currently the No. 4 seed in the East.

Teams seeded 5-12 in the Eastern Conference will face off in an eight-team, best-of-five qualifying round to determine who will advance to the traditional Stanley Cup Playoffs.

The NHL has implemented the same exact return-to-play format for the top 12 Western Conference teams in a bubble situated in Edmonton, Alberta, Canada.