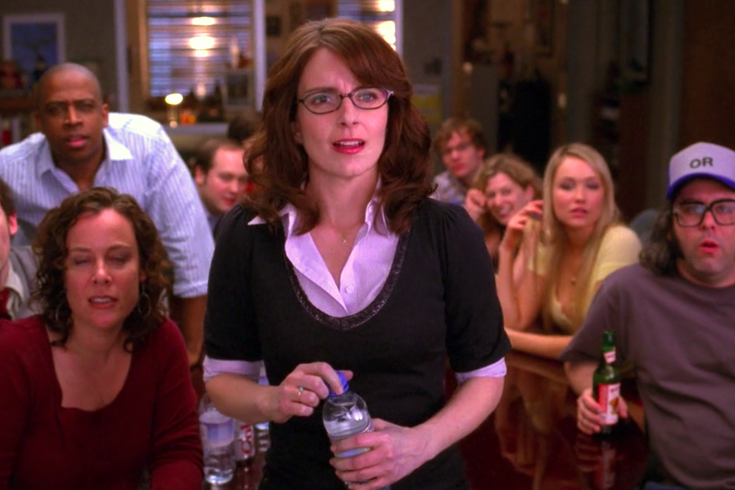 Liz Lemon in the writers' room on 30 Rock.

We've decided to answer those questions, and also provide our suggestions of three episodes to watch first — episodes that best summarize why the show is worth watching to give you a crash course on what makes it great. We are avoiding extremely serialized shows, like Breaking Bad, The Sopranos, The Good Place, and other classics that require you sit through the entire series start to finish.

So far, we've taken a look at a handful of comedies (Seinfeld, The Simpsons, Bojack Horseman, It's Always Sunny, Community, Futurama and Curb) as well as a drama (The West Wing). Today, we'll take a look at another comedy that was one of the best on the air during its seven-season run, and remains one of the funniest shows in NBC history: 30 Rock.

There are 139 episodes of 30 Rock, plus an hour-long reunion special that aired in July 2020 (and was filmed remotely during the COVID-19 pandemic).

Like most shows, 30 Rock takes a little bit to find its footing and the majority of the first season is a bit different (in tone and pace) than the rest of the series, but that doesn't mean it's bad. Quite the contrary. The early episodes lay down the framework for the later seasons, when the show really hits its stride, and several classic lines and the starts of more than a few running gags can be found in those early episodes.

It really doesn't. While everyone always has issues with the final seasons of their favorite shows, 30 Rock did as good a job of any at wrapping things up in its final season while still maintaining the same overall feel of the show. In fact, one of the major storylines of the final season is Liz Lemon's (Tina Fey) desire to have children, and in her mind, to have it all, something that she's been chasing since the beginning of the series. There are award-worthy musical numbers, running jokes reach their apex, and there's even a pop culture nod to another show's famous ending in the flash-forward scene at the end of the finale. It remains as cutting and critical of itself and its place in the TV world throughout, and that, aside from incredible characters, is what really sets 30 Rock apart.

As mentioned in the above section, there are several things that makes 30 Rock so, so good. For starters, there are the characters — the foundation of the show, aside from it's show-within-a-show format — that draw you in. There's Liz Lemon, the main character on the show and head writer of a sketch comedy show on NBC called "The Girlie Show" (TGS); Jenna Maroney (Jane Krakowski), Liz's best friend and the original star of TGS; Tracy Jordan (Tracy Morgan), the famous, and crazy, movie star brought in to spice up the show, and in turn threatening Jenna's place atop the TGS hierarchy; and network exec Jack Donaghy (Alec Baldwin), the man behind the decision to bring in Tracy, a capitalist's dream and an unlikely mentor for Liz.

The dynamic between those four is only heightened by the way they play off each other — and throw in a countless number of big-name guest stars (John Hamm, Matt Damon, Julianne Moore, Will Arnett, Jason Sudeikis, and Selma Hayek, just to name a few) and hilarious regulars (like Jack McBrayer, Judah Friedlander and Scott Adsit) and it's easy to see why this show was so popular.

Then there's the writing. On its own, this is one of the most tightly written network comedies of TV's golden age. Blink, and you might miss a joke. But that's also what makes 30 Rock incredibly rewatchable. You can watch an episode several times and still find new laughs each time (trust me, I've tried). And it's not just the number of jokes, but the quality of them as well, somehow walking the line of being incredible smart and biting while not coming off as smarter-than-you humor. That can, again, partially be attributed to the quality of the actors delivering those lines. But it's more than that. 30 Rock, being a show about a show, is also incredible self aware, and uses that as one of it's best weapons. And while it could run the risk of being too "inside TV," it remains incredibly accessible to the average person while still skewering the TV establishment and coming incredible close to breaking the fourth wall by bringing in real-life story lines, like when a company from Philly called Kabletown (a sub for Comcast) buys NBC from General Electric.

Every episode of 30 Rock is available to stream on Hulu.

Here's a look at three episodes that will give you the best sense of what the show is all about, although with a show as consistently great as 30 Rock, you can pretty much pick any three...

I know we mentioned earlier that the first season is a bit different than the seasons that followed, but that doesn't mean it isn't worth your time. For starters, it serves as a good groundwork for ensuing episodes, especially since so many running jokes are debuted early on in the series and built on from there. For example, this episode, which is just the seventh overall, features our first introduction to Jenna's movie, "The Rural Juror," which returns in several later episodes and comes full circle in the series finale when Jenna sings the movie's theme song. In real life, that song, which sounds like a bunch of mumbled words, was actually nominated for an Emmy, something that wasn't uncommon for the show's musical numbers.

This episode also features a Bryn Mawr College reference, one of a number of Philly shoutouts in the series thanks to Tina Fey's Delco roots.

But the reason we're including it is two-fold. First, the aforementioned introduction of running jokes. But it's also a great introduction to Tracy Jordan and his particular brand of crazy — as well as providing a perfect example of the power struggle between Tracy and Jenna that persists throughout the series. While Tracy comes off as an idiot on the surface, he might be one of the best-written characters in television history, especially as the series progresses. The double meanings to so much of what he says are incredible. Taken at face value, the comments are hysterical, but when you take a step back and think just an ounce harder about what he said, you're left wondering if Tracy is really dumb or is actually the smartest character on the show and just playing a character (yes, this show is meta on top of meta). In fact, they ultimately did an entire episode about this in which Liz thinks Tracy can't read, which is wrong, and leads to Tracy taking advantage of the situation. Good times.

At one critical moment in the episode, the camera pans to a television in the background and the host looks at the audience and says, "The game is about to change," right before cutting to commercial.

This episode is a perfect example of how 30 Rock uses its place as a show about a show to poke fun at its own industry, and there's plenty more of that throughout the entire series. It's one of the things that makes 30 Rock so great.

This is my favorite episode of 30 Rock, so I wasn't going to leave it out. By this point, you'll already have met Liz's on-again-off-again boyfriend, Beeper King Dennis Duffy, who returns in this episode with not only his latest get-rich-quick scheme, but also a shocking confession — that he's a sex addict. That, along with Tracy announcing that he's planning a trip to space, quickly becomes a subplot to this episode as Jack takes center stage ahead of his 50th birthday.

Jack, going through a mid-life crisis of sorts, realizes that he is a man who has everything — everything, that is, except happiness. He then spends the majority of the episode trying to find a gift he received as a child that made him so happy he vomited. One of the best gags in this episode comes when Jack wishes he could see the world through the eyes of Kenneth, the page. We also get a glimpse of what it's like seeing the world through Tracy's and Jack's eyes.

As for Liz's storyline with Dennis, that hits a boiling point when she intercepts a call from Dennis to Jenna as he calls all his former partners to let them know he's a sex addict and to apologize. Liz, who didn't know of their past relationship, takes her anger out on Jenna, allowing an on-stage accident to injure her. She's only able to get back in Jenna's good graces is by agreeing to let her employees see an embarrassing commercial for a low-rate phone sex hotline she was in years earlier.

All the while, the crew is creating a fake space flight for Tracy in the hopes that they can keep him from actually trying to go to space. Every one of the story arcs in this episode is great, and it's the perfect example of what 30 Rock can do when firing on all cylinders.