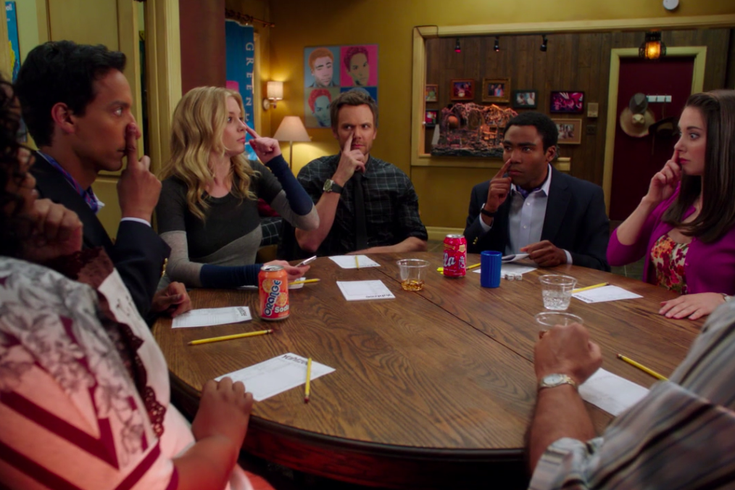 So far, we've taken a look at Seinfeld, The Simpsons, Bojack Horseman, It's Always Sunny in Philadelphia and South Park. Now, we'll turn to another comedy TV show: Community. This out-there series broke the sitcom mold and became one of the most unique shows on television.

There are six seasons with a total of 110 episodes. The first three seasons have 20-plus episodes each, while the last three have 13 each.

The first three seasons are good as a whole with inventive storylines and tons of heart, but it's late in the first season when Community really changes from a goofy ensemble sitcom into the outrageous and ambitious show that's made it a cult favorite.

Series creator and showrunner Dan Harmon was fired ahead of Community's fourth season, then re-hired for the last two. Season 4 is pretty much universally disliked by fans because it differs in tone and doesn't deliver satisfying storylines. In the show's final seasons, the characters refer to that period of their lives as the "gas leak year" to explain why they acted so strangely.

Lawyer Jeff Winger, played by Joel McHale, is forced to go to Greendale Community College to complete his undergraduate degree and becomes friends with a group of misfits through a study group. Obviously hijinks ensue, but it's doubtful you can guess exactly what these oddballs get themselves into throughout the series.

The show parodies TV and film tropes throughout and constantly contemplates how strange it would be to be a character on a TV show. That self-aware nature makes for some comedic gold.

Not all of the show's jokes stand up more than 10 years after Community's premiere, but there's still a lot to love. Many of the absurd premises bring some sincere, emotional moments.

Plus, there's some great talent involved with Community. Donald Glover, who wasn't yet a megawatt star, and Alison Brie consistently brought their A-game to the series.

*Note — These are three episodes we recommend to paint a picture of the full range of the show. We are not saying these are the three best.

Fans always talk about Modern Warfare in Season 1 as The Best episode. In it there's a last-man-standing paintball tournament at Greendale that pays homage to many famous action blockbusters, including Die Hard and The Matrix. And while it is a really great episode that sets the bar high for future parody/homage episodes, if you jump right into watching the paintball war you may mistakenly think Community is just one big gimmick.

Instead, we suggest easing in with a less talked about episode from the first season. Romantic Expressionism (Fun fact: All the episode titles are plausible college classes), makes fantastic use of its ensemble cast and also makes fun of sitcoms with ensemble casts. It goes meta in the way only Community knows how, with great results. Anytime the show gets the cast around the big table in the study lounge, know you're going to hear some really funny stuff. Plus, this episode helps quickly establish who each of these weird characters are within their group.

If you're going to watch Community, you need to know how deep down the rabbit hole into pop culture this show is going to travel. The pop culture jokes come quick and often, but there's also a flip side to Community.  These characters aren't just here for laughs, they also have sincere emotions to portray. And this episode does a good job of showing Community's two sides.

In Critical Film Studies, the group has plans to surprise Abed (Danny Pudi) with a Pulp Fiction-themed birthday party, since he's a big-time movie fan. But instead of viewers getting a spoof of the Quentin Tarantino film, they're pulled into a homage to My Dinner With Andre with Abed and Jeff. Ultimately, it doesn't really matter what movie they're referencing. The episode is fundamentally about building friendships.

In this episode, which was nominated for an Emmy for outstanding writing in a comedy series, the study group gets together for a party and accidentally create multiple timelines while rolling dice to see who has to go downstairs to get the pizza. Each time someone new is picked to get the food delivery, the story is changed. In one timeline, the apartment gets set on fire. In another, everyone has a good-natured dance party together.

There's so much comedy packed into this episode – which is really seven episodes packed into one – and it fully showcases how funny, smart and ambitious Community can be when it leans into its more absurd storylines.