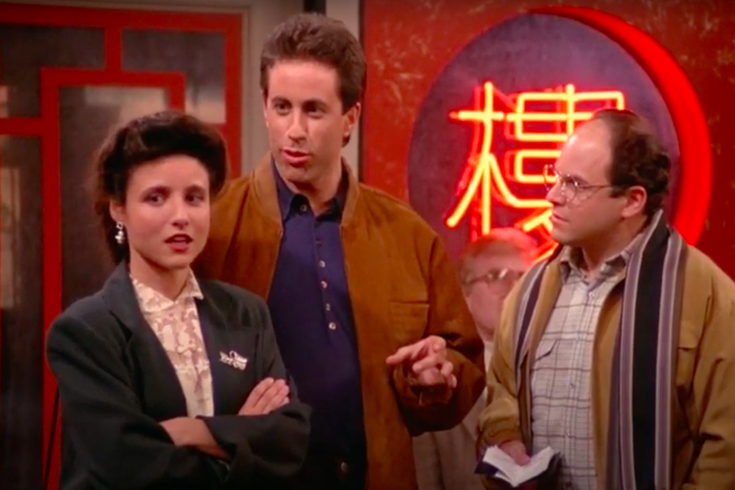 Elaine, Jerry and George spend an entire episode trying to get a table at a Chinese restaurant.

We already took a look at the classic GOAT animated adult comedy The Simpsons. Now here's a look at one of the most important shows ever to grace American televisions: Seinfeld.

Season 1 of Seinfeld is comprised of five episodes — it was originally a filler show in the summer of 1990 and those five can be hard to watch. Honestly, skipping them is fine, as Season 2 is where the show figures out what it is with a handful of memorable episodes (most notably "The Chinese Restaurant").

Really, aside from a few clunkers in Season 9 (the last season, and the one after Larry David left the show), the entire body of Seinfeld from Season 2 onward is extremely solid.

There's a chance it's not your exact sense of humor. There's also a chance it's too slapstick at times, or a little dated (though not by much). But it's hard not to credit co-creators Jerry Seinfeld and Larry David with perfecting the half-hour sitcom. The show is iconic, and has really survived the test of time (and is a prefect window into a world without the internet or cell phones). It's one of the first shows ever to show that main characters do not need to be likable to carry a show.

The humor is incredibly high concept and smart at times and also predictable and stupid at times too. It breaks all the rules while also adhering to them in a very unique way. If you are a fan of TV and have not watched Seinfeld, you are missing out.

The series currently resides on Hulu, but it is syndicated on TBS, and on many local broadcast affiliates daily. The entire series will also be available on Netflix in 2021.

To get a crash course and a good taste of what makes the show great, we recommend the following three episodes:

*Note — these are three episodes we recommend to paint a picture of the full range of the show, we are not saying these are the three best.

This one is arguably the first great episode, and it literally takes place — in its entirety — as the gang waits for a table at a Chinese restaurant. It's a lot more entertaining than it sounds, and is extremely quotable. My own parents, since whenever I can remember, would yell "Cartwright," or "5-10 minutes" anytime we got Chinese food (yeah, it was a different time...).

The great thing about TV comedies (at least from this era) is they really are self-contained pieces of work that don't require too much knowledge of previous episodes. The show does get a little serialized later on, but never too much that you can't just hop in and follow along.

For those of you reading this who are huge Seinfeld fans — we know: this episode isn't considered as an all-time great. It's not "The Contest" or "The Soup Nazi." But we aren't looking to recommend the best episodes of all time. Our hope is that a non-viewer partakes in the three we suggest and then is compelled to watch the entire series, at which point the best episodes of the show will become apparent naturally. That is why we are nominating "The Big Salad," an episode that is absolutely attuned with greatness, but is also quite average with contrast to other episodes.

The show is at its best when it is focused on the mundane, low-stakes issues we deal with in everyday life. It's called the "show about nothing" for a reason. In this Season 6 episode, which aired as Seinfeld was in its absolute prime, examines the proper way to thank someone for delivering food, correct golf etiquette, and shopping for a pencil. It's the show at the peak of its powers.

Seinfeld's true greatness came from its ability to weave seemingly unrelated plot lines from its four main characters together into a big final payoff. There are may examples of this, but one of my personal favorites comes from "The Rye," when George is forced to resolve an uncomfortable situation regarding a piece of bread his parents brought (and took home with them) after a meal with his future in-laws.

Jerry and Kramer work as coconspirators in George's unceremonious scheme, with Kramer's storyline in this episode being exceptionally memorable. The four characters being relatable idiots is what makes this show so enjoyable at times and "The Rye" is a perfect example of this. It's also an episode that highlights another of Seinfeld's biggest strengths: guest stars.