'Solar Opposites' review: Does new show from 'Rick and Morty' creator stand on its own? 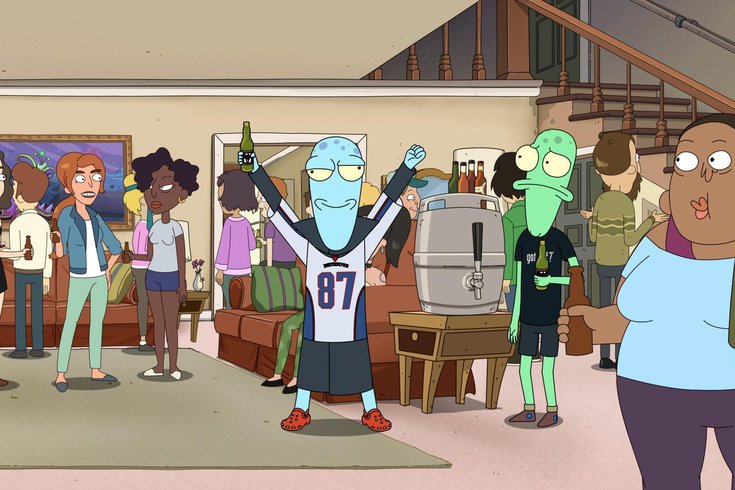 The golden age of television has not come without drawbacks for creators. Once you're at the helm of a beloved property, it's best not to let anyone know you're working on anything other than that show, lest they look to bury you for any drop in quality in the show that made you rich. Just ask the team who made Game of Thrones how that worked out for Season 8.

Into these waters steps Justin Roiland, co-creator of Rick and Morty, with a new project titled Solar Opposites. The first eight-episode season of the Hulu exclusive dropped this past Friday, less than a week after Roiland's more popular property returned for the second half of its fourth season. An outsider would be forgiven for confusing the two — they share an animation style, voice acting, and sci-fi leanings on a basic level.

But in a brief first season, Solar Opposites does manage to stand out from its predecessor, sometimes for better and sometimes for worse.

(The review that follows will contain mild spoilers from the first season of Solar Opposites.)

The opening credits lay out the basic plot of the show: an alien "family" escaped their home planet moments before an asteroid destroyed it, carrying with them a small creature (Pupa) who they are in charge of nurturing until it grows up and presumably consumes the planet.

Solar Opposites has deeper sitcom roots than its predecessor. The relationship between the titular characters in Rick and Morty is one-sided and often abusive, Rick only allowing his grandson to choose an adventure by cashing in an adventure coupon collection akin to an ice cream shop promotion. Meanwhile, the family unit is at the center of Solar Opposites.

Korvo, a type-A scientist who opens each episode with a different thing he hates about Earth ("Where the f*ck are all the dinosaurs?"), and Terry, a laid-back caretaker who we first meet in a Dick Wolf t-shirt, are the odd couple at the heart of the show. Their methods and priorities clash enough to create fodder for episodes, but they bicker in the way you do with a beloved sibling, not an enemy. In their care are the aforementioned Pupa and two children, Yumyulack and Jesse, whose own views on the world are similarly divergent.

(Roiland's voicing of Korvo, by the way, is often functionally indistinguishable from his voiceover work for Rick, character quirks aside. While this isn't uncommon in voice acting work from well-known people, it does contribute to some of the feelings of sameness for fans of the longer-running show.)

At its core, Solar Opposites is a fish out of water comedy with the amplification of cartoon sci-fi, and each episode typically centers around human problems with alien-tech solutions. Terry's world begins crumbling upon learning a mascot isn't real in the pilot, previously believing television to be an accurate depiction of all human history, so the solution is to use a matter manipulator to create the damn thing themselves. They can't figure out why their version of a man cave feels so uninspiring (perhaps because they inexplicably choose to root for the Cleveland Browns), so they build a nagging robot wife to increase their appreciation for it.

Flipping the dynamic from "humans exploring space" to "aliens settling in on earth" grounds the show in a way that's not necessarily possible in Rick and Morty. Its concerns are decidedly human, a la an election for the presidency of the local homeowners association, rather than an intergalactic trade war or time-traveling snakes. That figures to change. The first season eventually moves in a direction that suggests we will be seeing more of life outside Earth in the ensuing seasons, and Solar Opposites has already been renewed, which makes the cliffhanger ending of the first season a bit more forgivable. 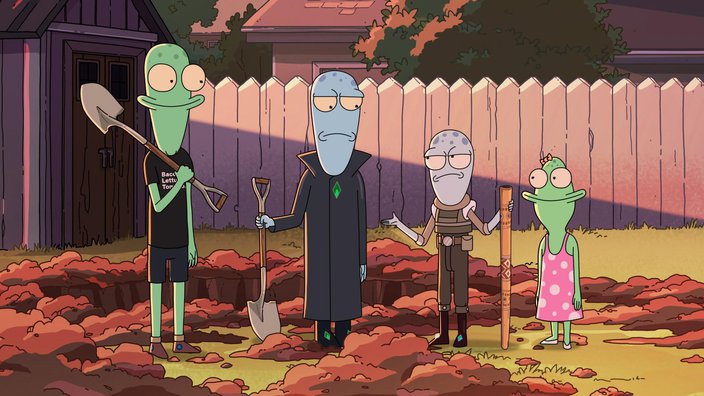 Some of the jokes and themes land better than others. The world-consuming Pupa flashes intelligence and picks up steam at the end of the season, but the subplots built around it often fall flat. An episode where Jesse is given a school assignment to "break a glass ceiling" only to find out most have been broken comes off a bit tone-deaf, but another episode does an excellent job exploring gender and puberty through the eyes of asexual alien children. Their attempt to grow up in this world becomes more foundational to the show as it moves through season one, and Solar Opposites is better for it.

Those children also facilitate what is easily the best subplot on the show. As shown in the trailer, Yumyulack is initially impatient with humanity and begins systematically removing people from Earth by shrinking them down to an inch tall and storing them in containers embedded in their wall. Their range of offenses varies wildly — one may be a bully, the other may have worn the wrong color shirt on a given day — and Jesse does her best to soften his stance and feed the miniature people as much as she can.

What begins as a shrink ray gag evolves into a well-realized (if occasionally derivative) second world within Solar Opposites. It is the violent wasteland of Mad Max, mixed with the organizational structure of Escape From New York, driven by an economy of Skittles and Legos and miniature reading material. There are twists and turns within that tiny piece of the show's world, and whether they continue focusing there or find some other subplot to develop in season two, I'm interested to see what else Roiland and co-creator Mike McMahan can build around the edges.

Questions about whether it feels essential, though, are fair. Solar Opposites is considerably more risk-averse and familiar feeling than Roiland's other show, a show still finding its footing compared to a show that has been empowered to get weirder and bolder as time has gone on. Solar Opposites dropped right as Rick and Morty returned, and it'll be interesting to see if they're able to exist harmoniously or if the bigger, established name will hog all of the attention.

Whether it escapes the shadow of the older and more accomplished sibling, the first wave of Solar Opposites is fun and breezy while prepping viewers for a future with bigger stakes. With the real world crumbling, the light sci-fi adventure is a welcome dose of consequence-free absurdity.