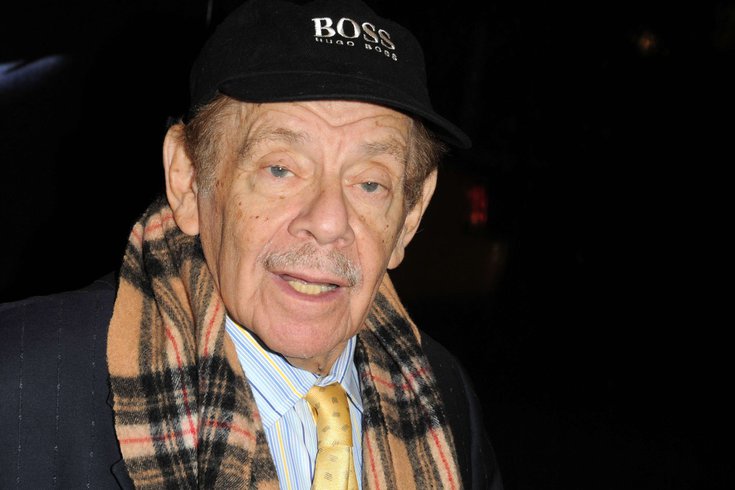 The dawn of the cell phone era may have taken the punch out of some Seinfeld plots, but "the show about nothing" remains ubiquitous to this day. If you've ever shamed someone for double dipping, contemplated whether you should re-gift a present, or yada yada yada'd your way through a story, you can trace your actions back to what was once the biggest sitcom on Earth. Even if you didn't or don't love it, the influence is hard to deny.

Who better represents that than Jerry Stiller? Decades after the 90s powerhouse ended, and certainly in the hours following Stiller's passing at age 92 on Monday morning, Stiller remains a stand out from a show packed with past and present comedic stars. Though he didn't make his first appearance on the show until the fifth season in 1993, he made an instant impact, and would eventually earn an Emmy nomination for Outstanding Guest Actor in a Comedy Series in 1997.  If there is a more impactful bit character than Frank Costanza, they haven't emerged yet.

After a long career as part of a comedy duo with his wife, Anne Meara, Stiller's late-career resurgence led to movie roles, a long-running part in CBS sitcom The King of Queens, and numerous parts alongside his son, Ben Stiller. In honor of his passing, these are just a few of the moments that stand out from a long and successful life and career. Thanks for the laughs, Jerry.

"I got a lot of problems with you people. And now, you're going to hear about it!"

The creation of a fake holiday is one of the enduring pieces of Seinfeld's legacy, and Stiller's Frank Costanza was the architect. Christmas? Forget that. Why give your family gifts and sit around the Christmas tree when you can gather around an aluminum pole and air your grievances with your loved ones?

Stiller's ability to jump back and forth between emotions is the reason the whole thing works. One moment he is dutifully explaining the holiday to Kramer, the next he is accosting his son's boss with complaints George made in private. What other holiday has to end with a man pinning his father on the ground next to the dinner table?

This episode was inexplicably named "The Strike" after the work stoppage Kramer led when his bagel shop wouldn't let him take off for the holiday he just learned about, a decision the creators have admitted to regretting later on. Something worth remembering during the annual airing of grievances.

Most people remember Jerry Stiller as Frank Costanza, and while that may be the best role he's ever had, there's another character played by Stiller who might've been even funnier if we had seen him on the screen for a similar amount of time. And that is...

...Maury Ballstein, agent to the stars.

The role saw Stiller play the modeling agent for the title character in Zoolander, who was played by his son, Ben. And it was almost certainly written specifically with the elder Stiller in mind. It's almost like, "What if Frank Costanza was incredibly successful?"

I mean, couldn't either character have masterfully delivered this line? "I've got prostate the size of a honeydew and a head full of bad memories." And then there's the bathroom scene...

From the constant complaining about his enlarged prostate to his baffling words of encouragement to Zoolander, Maury Ballstein is an absolutely hysterical character who deserves more credit than he receives. Or, more appropriately, maybe the credit should go to the actor who brought this character to life in a way that now makes it impossible to envision anyone else in that role. It's not all that different with what he did on Seinfeld. I mean, do you remember the other actor who played George's dad before Stiller? Because there was one. Making you forget he ever existed was Jerry Stiller's gift. — Matt Mullin

A contrast from his quick-tempered, loud-mouth moments he was best known for on Seinfeld, "The Fatigues" is an episode centered around Frank Costanza's past as an Army cook in the Korean War. Kramer, who is in search of a cook for his Jewish singles night at the Knights of Columbus hall, calls on the elder Costanza for aid.

What follows is a dramatic flashback and re-telling of one of Costanza's greatest regrets: overseasoning expired meat and sending "16 of my own men to the latrines that night." Until he is pushed by Kramer to cook, Stiller is stern, while a dramatic reenactment set to Adagio for Strings (a song previously used in 1986's Platoon) plays in the background. Making PTSD seem funny is a difficult needle to thread, but Stiller somehow pulls it off.

"Tell that to Bobby Colby, all he wanted to do was go home," Costanza laments. "Well he went home alright, with a crater in his colon the size of a cutlet!"

Of course, he is eventually convinced to get back in the saddle and cook once again. As you might expect, his renaissance doesn't last long.

Stiller's less-regarded but no less important contribution to the Seinfeld canon, "The Serenity Now" combines a catchphrase designed to keep Frank Costanza's blood pressure down with an adult nightmare — the prospect of working for and living with your parents.

Never one to hold a job too long (save for his stint with the Yankees), George's desperation leads him to take a job selling computers for his father in Seinfeld's final season. The twist: he is one of two salesmen for the company, working alongside childhood rival Lloyd Braun, who initially appears to be much better at selling computers than George is.

If you thought being the boss' kid was an asset like it is in the real world, think again.

"I am not dad in the workplace, my professional name is Mr. Costanza, and I will refer to you as Constanza," Stiller matter-of-factly tells his son, moments after his son is accosted by his mother off-screen for being late to work.

As the cast learns over time, shouting a two-word phrase to control your anger isn't the fix they believe it to be. That doesn't stop Stiller from settling on another one as the episode comes to a close: "Hoochie mama!"

Jerry Stiller was the literal definition of a scene-stealer. He provided Seinfeld with heat check after heat check. He only appeared in 26 of 180 episodes, but his Frank Constanza was so bigger than life it feels like he was in five times that many.

It’s hard to pick his best scene but the DVD’s (which my parents owned back in the day and I used to watch over and over again) included this deleted scene which kills me every damn time. No one can keep it together except for, of course, Stiller, who is so funny as an angry Frank that no one can stop laughing. —Evan Macy