Thinking of binging The Simpsons? Try these 3 episodes first 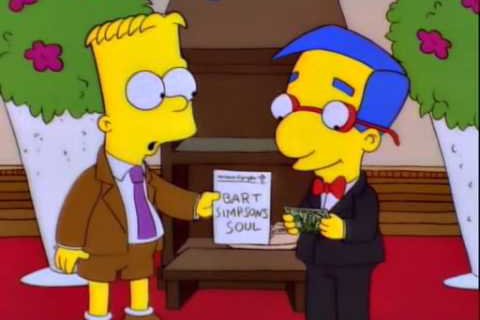 We've got some advice for those thinking about binging the Simpsons.

Here's a look at one of the most important shows ever to grace American Televisions: The Simpsons.

Watching shows, particularly sitcoms, from the beginning can be tough sometimes. The same can be said for The Simpsons. Midway through Season 2, the show really hits its stride.

Most experts agree the golden age ends around Season 9 or 10.

The Simpsons was THE pop culture television show of the 1990s and it really holds up. Before the new regime took over the show and turned the entire thing into a caricature of itself, The Simpsons had heart and was absolutely jam-packed with humor. It was a global phenomenon for a reason. The rate of quality jokes per minute, paired with incredibly adept and creative plotting and character development between Seasons 2 and 9 is unparalleled — and has more or less been the driving influence for television humor over the last two decades.

The entire series is available on Disney+, or those with a cable subscription can find it in syndication all over the place. We also found quite a few episodes on YouTube.

To get a crash course and a good taste of what makes the show great, we recommend the following three episodes:

*Note — these are three episodes we recommend to paint a picture of the full range of the show, we are not saying these are the three best.

Dustin Hoffman guest stars as a substitute teacher for Lisa's class. This episode flexes the muscles of the show showing how it can tug at your heartstrings while also making you laugh. The animation is a little crude — and it will improve — but exposure to this kind of episode in this era of the show is crucial for appreciating the first decade of its prominence.

Is it required that you can pick up on references to old movies like, say, The Graduate (which starred Hoffman)? It helps — but the great thing about a show like The Simpsons is the references are a spice to the humor, not the centerpiece of it. The end of this episode will have you in need of a tissue box. Consider yourself warned.

This is my absolute favorite, all-time best episode of the show ever. It has absolutely everything. It has action and adventure, it has meta humor paired with incredible writing and it is a wonderful re-imagining of, you guessed it, the Trojan Horse. The number of 20-second YouTube clips I could include for this episode would probably destroy the back end of this website.

Essentially, a rival bordering town steals Springfield's prized lemon tree and Bart leads a group of kids who venture into "enemy territory" to get it back. This episode is both an incredible Bart and a hilarious Homer episode. Both shine in this masterpiece of animation, which packs a ton of jokes and plot into just 22 minutes.

The peak of The Simpsons greatness may have been Season 7, with this episode highlighting the show when it fires on all cylinders. Bart sells his soul to his friend Millhouse and then goes on a surprisingly brutal journey to try and get it back from him. Meanwhile, local bar owner Mo turns his dive into a family restaurant — a storyline in the running for the best B-plot in the show's history.

The heart in this episode really shines, as The Simpsons shows it is a program that can seamlessly fuse a dysfunctional family with cartoonish qualities into a group of characters who love each other, have real emotions and have serious stakes in their pursuit of happiness.

Give these three episodes a chance. We have no doubt you'll have the show on (at least Seasons 2-10) as a perfect replacement for The Office as a background binge while you work, clean or wind down at the end of the day.