March Streaming Madness Championship: The Office vs. Game of Thrones 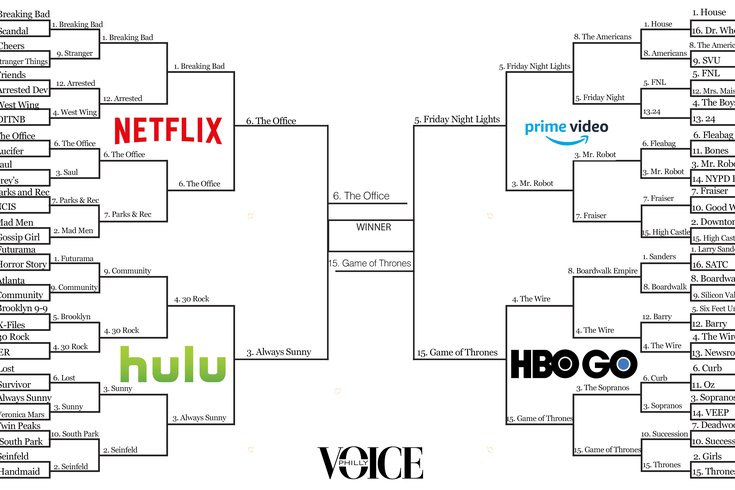 It's a high budget epic violent bloodbath filled with politics, sex, intrigue and science fiction vs. Dunder Mifflin, a TV show set in the office of a paper company.

Just how we expected it to play out.

After thousands of votes and the PhillyVoice sports staff picking incorrectly week in and week out, the masses have spoken and we have our championship match. Which show is the best to stream during the current self-quarantine?

Well, it will either be The Office or Game of Thrones.

In a way, this match up makes sense. Both were airing on television recently and are now able to be watched via streaming (or re-runs in the case of The Office. Both offer a total escape from the depressing state of the world right now — albeit one is an entire different universe and fantasy and the other is a workplace from the era of flip phones.

From 64 TV shows we are down to the final two. And one last time, we're asking for your vote. Which show would you rather have on your television this week to help pass the time?

How they got here

The Office, awards-wise, won best comedy after its first season and subsequently won one writing and one directing Emmy, plus a couple technical awards. It never won an acting Emmy (though Steve Carell won a Golden Globe for Season 1).

Thrones has won best drama at the Emmy's four times, and was nominated for all eight of its seasons. In its fifth season, it smashed the record winning 12 awards. The show had 13 different actors nominated for an acting Emmy. It is one of the most decorated series of all time.

Evan Macy: This one is really not hard for me (I am voting Game of Thrones), but I (and our staff) have laid out why we don't want The Office to win for quite a few rounds now. I think this should be a close match up but both shows have very differing areas of appeal. The Office is a great mindless background show while you are working or cleaning, while Game of Thrones is a nice reward to watch at the end of the day — but one that definitely demands full attention. I hope Thrones wins, but if The Office does, it's a sign of what people want in their self-quarantine entertainment... not a distraction but background noise.

Matt Mullin: This was an easy pick for me. While I enjoy The Office — some episodes way more than others — I don’t think it can really compare to Game of Thrones, even with its terrible ending. Even knowing it’s disappointing final season, I’d still sign up to re-watch GOT tomorrow, and I just might. That being said, the goal of this bracket is to find out what people want to stream most right now, and with everyone working from home, maybe folks are just missing their friends at their own offices and are pretending they’re still there by having the Dunder Mifflin crew in the background while they work. After all, The Office has already knocked off Breaking Bad, so I guess anything is possible…

Kyle Neubeck: I only hated the final season of Game of Thrones, which is several steps above my complete disinterest in The Office. Thrones delivered blockbuster TV and great writing for at least half of the show, and if not for the final season would have been a deserving winner and much higher seed here. What I have learned from this tournament is that more of you need to watch The Wire, Sopranos and Breaking Bad

Jimmy Kempski: The Office, I guess. The last 50 or so episodes are, dare I say, bad? And obviously, the last season of GoT was bad as well. So we have a final round showdown of two shows that were great at one time, but fizzled badly down the stretch. Woohoo! If I had to choose between the two, I’d say that GoT had more big moments, but The Office is more rewatchable, in an “I’m getting other things done while this is on in the background” sort of way, while I don’t think I’ll ever fire up old episodes of GoT. But neither of these shows can touch Breaking Bad or The Wire, to name a couple, with a ten foot pole. So I’ll vote for The Office here, but under protest.