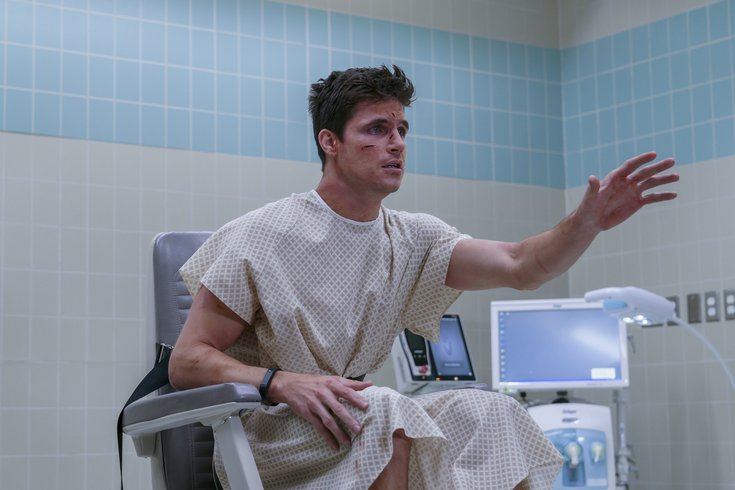 Last week I was partaking in my favorite quarantine sport — you know, flipping through Netflix, Hulu and Amazon Prime looking for something to watch — when I came across a new, unfamiliar show from an old, familiar name. The show is called Upload. And the creator is Greg Daniels, whose name you may not recognize, but whose work you've definitely seen before.

Daniels, an Emmy Award-winning writer who adapted the American version of The Office and co-created Parks and Recreation, has been working in comedy television for nearly three decades since starting with The Simpsons back in 1993. As you can see from his past credits, he's an incredibly accomplished writer and show-runner, so when I saw he had a new series streaming on Amazon Prime, I immediately threw on the trailer to see what it was all about.

What I found was something of a cross between two of my favorite pieces of pop culture of the last decade: NBC's The Good Place and the "San Junipero" episode of Black Mirror. I didn't recognize most of the actors, but that's just fine. I had no idea who Manny Jacinto was until The Good Place introduced me to Jason Mendoza, and I'm better for it. And given Daniels' past ability to develop characters without using big-name actors, I decided to dive in.

[Note: If you haven't watched either of those, go do so immediately. Not only are both incredible, but I don't want to accidentally spoil either for you.]

The immediate comparisons to The Good Place and "San Junipero" are interesting, given that the former was created by Daniels' Parks and Rec co-creator Michael Schur and just wrapped up its final season earlier this year, and the latter is from a much darker anthology series that seems quite unlike anything Daniels has done in the past. So even as I pressed play on the first episode, I still wasn't entirely sure what I was getting into.

The series takes place in 2033, and opens on a world in which you can have sex in a bed in the back seat of your self-driving car, police are actually just iPads attached to drones, every major corporation is a conglomerate (like Panera-Facebook and Oscar Mayer-Intel), and most importantly to the plot, the afterlife is digital and guaranteed — if you can afford it.

However in some cases, like that of main character Nathan Brown, all that technology can be used against you.

While the technology of the future and the lure of a world where death in its current form has been all but eliminated are two pillars of the show, there are much deeper and more nuanced themes at work. And, right from the start, we're hit with one of the big driving forces of this show: class division, something that apparently has made the leap from real life to the afterlife. And there are several ways this plays out.

In the opening shots of the show, we're given a glimpse of what that virtual afterlife looks like for the "haves" as a commercial airs showing one of the top properties (called Lakeview) offered by Horizen, one of the leaders in digital afterlife service. We soon find out during a Thanksgiving dinner that Nathan, a coder, and his business partner/best friend Jamie were working on a free version of this digital afterlife that would make it accessible to everyone, not just those rich enough to afford it. But on the way home from dinner, Nathan's self-driving car malfunctions and slams into a parked truck. He's rushed to the hospital where we see the scene from the trailer play out.

Because being "uploaded" — a.k.a. having your consciousness scanned and turned into what amounts to a server — only works while a person is still alive, a still-shallow Nathan (played by Robbie Amell) must decide whether or not he wants to go to the operating room, where there's a chance he dies on the table, or the upload room, where he can guarantee he'll spend eternity with his uber-rich girlfriend, Ingrid (once she arrives, of course). On advice from his doctors that may or may not have trustworthy and despite his instincts, he opts for the upload to Lakeview, something he wouldn't be able to afford if not for Ingrid (Allegra Edwards). 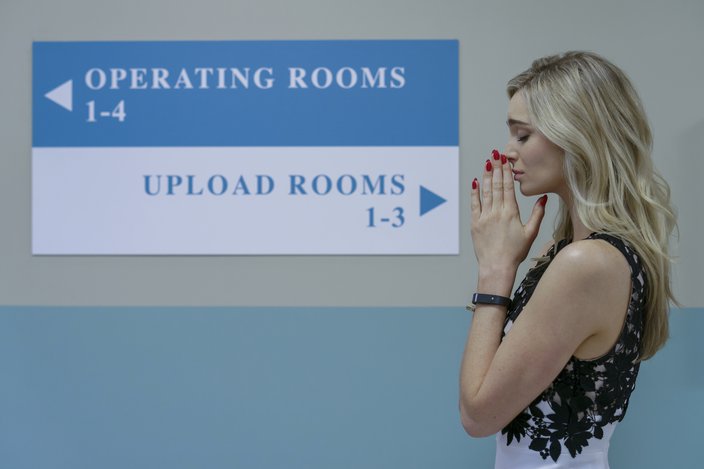 Allegra Edwards as Ingrid Kannerman in Season 1 of “Upload.”

At the same time Nathan is meeting his demise, we're also introduced to the show's other main character: Nora (Andy Allo), a disillusioned young tech support employee at Horizen, who is decidedly one of the "have nots" in this story. Shots of Nathan riding to dinner in his fancy self-driving car are cut closely with shots of Nora taking over-crowded public transit to work.

But this class distinction carries over to the afterlife, even one that looks idyllic on the surface. Once Nathan arrives at Lakeview — which, as my wife liked to remind me every time an exterior shot appeared, is set at Mohonk Mountain House in New York — he quickly realizes that most of the amenities offered there, from non-cafeteria food to clothes to basically anything, costs money. Real money. Money someone in the outside world is responsible for if you don't have enough money in your own account. And because Nathan was uploaded using Ingrid's account, she has to approve every transaction.

Then there's the class divisions within Lakeview itself, from those with unlimited means like the ultra-rich David Choke to those with barely any data, known as the 2Gigs. That's right, even in the afterlife, there are caps on your data if you can't afford the unlimited plan. And for those in stuck in 2Gigs — think steerage on the Titanic — they basically get enough data each month to survive, but even the slightest physical or mental effort, like thinking too hard, can cause them to run out before the end of the month. They have barely any activities to keep them busy, and those that they do, like a shelf full books that only include the first five pages — you know, the ones you can read for free on Google before deciding if you want to buy the entire thing.

To help navigate through this new post-world world, Nathan befriends Luke (Kevin Bigley), a former soldier who lost both his legs in the war and decided to sui-scan himself rather than continue to live in the real world. Luke offers up advice on everything from how to get free food once the dining hall stops serving a certain meal — at one point Nathan loads up a plate full of some of the most delicious breakfast foods you can imagine, only to learn the hard way that once breakfast is over, not only does all the food at the buffet disappear, but so does all the food on your plate — to the dangers of the torrent, the stream of data that links Lakeview to the outside world and has drawn depressed uploads to their death. There's also foul-mouthed Dylan, a nine year old who died when he was a little kid and is trapped in that same body despite now having the mind of an 18 year old.

In addition to the friends he makes along the way, Nathan, like all the guests at Lakeview (and there are millions of them), is given an "Angel," the official term for customer service reps like Nora. And, because this is a television show, you can already guess that Nora is the Angel assigned to Nathan. 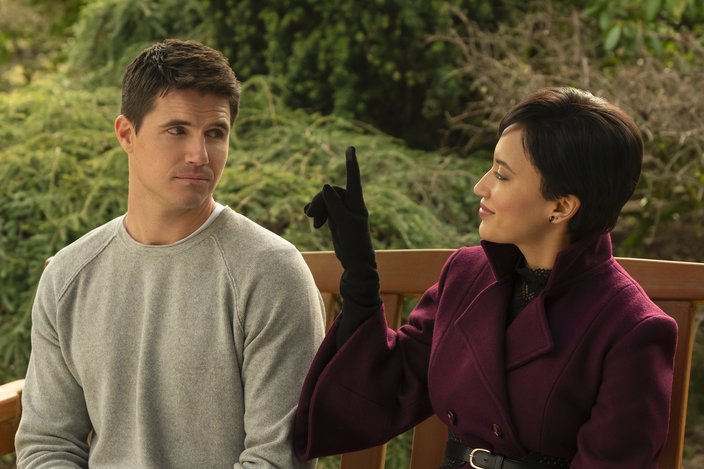 As the show goes on and continues to show us more of the perks (and glitches) that come with a digital afterlife — like how sex works with an upload and their still-living partner — a bond begins to form between Nathan and Nora, to the point that goes well beyond what is allowed between Angels and uploads. Nora finds that although she can't actually touch him and their interactions are only done through virtual reality, her feelings for Nathan are more real than her feelings for anyone else in the outside world. Given that Nathan is only in Lakeview by the grace of Ingrid, this presents problems beyond what it means for Nora's employment.

In addition to world building and showing the viewer what is and isn't possible in the digital afterlife, those relationships between Nora and Nathan and Nathan and Ingrid are what drives the plot of the show. But by the end of the season, what starts as a subplot of the series — the mysterious circumstances surrounding Nathan's death — come into the forefront.

Unlike most 30 minute comedies, Upload is not a sitcom. It's a plot-driven show that builds a mystery and creates suspense while distracting you with laughs.

While Nathan is adjusting to life at Lakeview, he begins to question whether or not he should actually be dead, and the role his free upload project may have played in that process. The problem is, as we learn at the end of the first episode, that someone has been purposefully deleting some of his memory files as they were uploaded to the Horizen system. He dances around the subject, but it immediately makes him in the face during a conversation with his neighbor, the aforementioned David Choke, who is clearly based on one of the Koch brothers. Nathan tells Choke that he's been experience memory gaps and that he was working on a free upload program, and almost before he can get the words out of his mouth, Choke says bluntly, "So you were murdered."

From there, both Nathan and Nora — and some others — begin searching for answers when it comes to his untimely death. And what they find not only puts themselves, but everyone they care about in grave danger. The answers, it seems, are likely hidden somewhere in those same memories that have been stolen from Nathan, who spends much of the first season balancing his relationship with Ingrid, his place in the Lakeview hierarchy and the circumstances that led him to position in which he currently finds himself.

And that brings us to the biggest question: Is it worth taking that ride with Nathan and Nora for 10 episodes?

The answer here is decidedly yes. While the show may lack the deep philosophical lessons of The Good Place or the emotional connection of "San Junipero," it doesn't try to be either of those things. It does enough to stand on its own as a different sort of afterlife show, one that is able to straddle slap-stick comedy and real tense situations with actual stakes.

And because those do-or-die stakes continue to be elevated throughout the second half of the season, we're going to avoid talking any specifics here as to not ruin the ending, other than to say it's worth your time and does a great job of setting up a second season while also providing some twists and turns that you might be more likely to expect from an episode of Black Mirror than from a 30-minute comedy.

The full first season is currently available to stream on Amazon Prime.