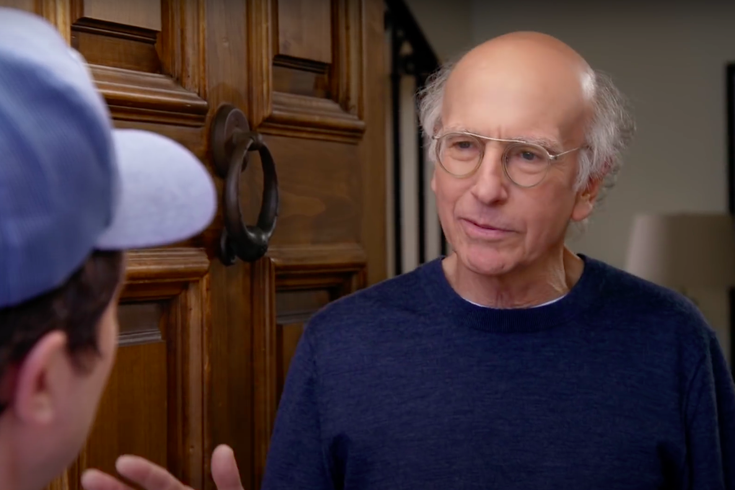 Larry David answers his door in the most recent season of "Curb Your Enthusiasm."

So far, we've taken a look at Seinfeld, The Simpsons, Bojack Horseman, It's Always Sunny in Philadelphia, South Park, Futurama, Community, and even a drama with The West Wing. Now it's time to get lost in the neurotic mind of Larry David with a look at Curb Your Enthusiasm.

There are 100 episodes, plus the 60-minute special that started it all.

This show does not stop being good. Ever. And it arguably reached new heights with its latest season. We'll get into some specifics with our next question...

• Larry David. We referenced him already but if you are completely new to the show, he is the co-creator of Seinfeld (and often starred in the show, most notably as the man in the cape, and as George Steinbrenner). He is a comedic genius, and the same kind of humor that made Seinfeld great is what drives Curb, but on steroids. He plays a version of himself, living in L.A. after Seinfeld with lots of money and lots of time on his hands.

• It's improvised. We aren't kidding about that. David and his "writing staff" often create important points of emphasis, or perhaps a single line that they intend to get to in order to drive a particular plot — but the rest is totally made up. It's a completely unique way to make television and there is no replicating the comedy gold this technique is able to capture.

• It's kind of serialized. Yes, yes, we know this is an article meant to help expose you to the show and it's not all serialized — but many seasons have particular themes:

• Season 3: Larry invests in a restaurant
• Season 4: Larry is cast in the broadway play The Producers
• Season 5: Larry thinks he's adopted
• Season 6: A family from New Orleans moves in with Larry
• Season 7: Larry produces a Seinfeld reunion, yes, really...
• Season 9: A fatwa has been declared on Larry by the Iranian Ayatollah
• Season 10: Larry opens a "spite store"

In each of these seasons the through plot line adds to the show, but it's most often the "B" story that shines as he gets into a ton of other messes each week.

• The supporting regular cast is absolutely incredible. Jeff Garlin stars as his best friend and manager. Susie Essman plays Garlin's wife, the naggingly obnoxious Susie Green. J.B. Smoove is Leon, a black guy who is the polar opposite of Larry but who won't leave — and eventually becomes besties with L.D. Bob Einstein as Marty Funkhauser, who steals scene after scene. And of course all the celebrities who play themselves, like Ted Danson.

• The subject matter. All of the mundane details, like waiting in line for things, apologizing, proper use of a coaster on a coffee table, the absurd use of fake fruit to decorate, I could go on and on...

Curb is an HBO show, so HBO Go and HBO Max each have it, as does Amazon with an appropriate subscription.

The following three aren't the three best, nor are they chronological. They are just three snippets of the show that will absolutely get you hooked.

[WARNING: The clips embedded below — like the show — are most certainly NSFW.]

This episode is loaded with ridiculousness. Larry getting out of jury duty by being just a little bit racist, Larry buying pot, Larry's pot accidentally getting Marty Funkhauser arrested. But the thing that makes this episode truly great is the scheme Larry concocts to get to the Dodger game in time.

A series of seemingly unrelated plotlines seamlessly come together at the end of this episode — a la Seinfeld. The episode is also noteworthy as footage taken during the filming of this episode at Dodger Stadium was actually used to exonerate a murder suspect as it established an alibi (which was highlighted in a short Netflix documentary called "Long Shot.")

I personally enjoy seeing Larry at his most petty. This is a great example of that, as Larry cannot stand the celebrity sandwich that has been made in his honor at a local restaurant and tries his hardest to get someone to switch with him.

The episode also delves into the horrible handwriting doctors have when they write prescriptions, and launches the aforementioned season-long plot line that Larry may be adopted.

We picked this episode because it's really a no-frills-but-still-excellent typical episode of Curb. It will make you laugh, think, and also make you just a bit uncomfortable. No one does "cringe" better than Larry David.

Many call this episode the GOAT — and it's just too good not to include on the list. Not to give anything away, but a book about "freaks," concern for a limo driver forced to sit and wait, and a serious of ridiculous "ejections" summate this stanza of the show. Larry also poses as a chauffeur for tennis star John McEnroe (who admires his book of freaks).

Here's the origin of the book in question:

We hope you'll take your valuable screen time and devote it to a show inspired by Seinfeld but one that arguably has reached an even more elite place among television comedies all time.