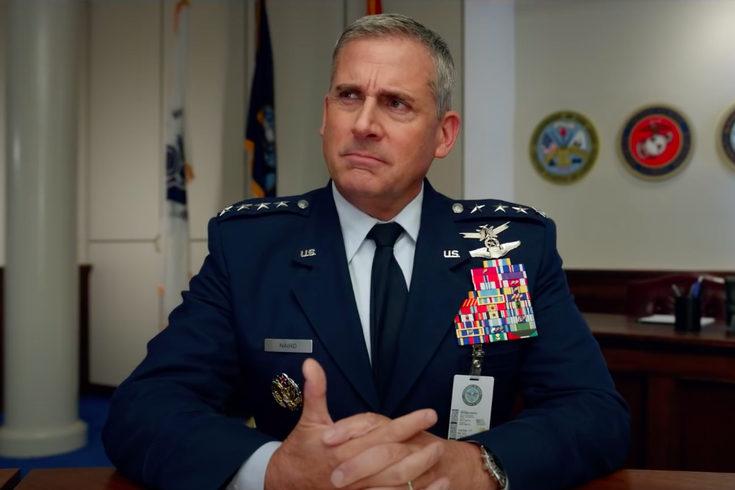 The very concept of Space Force feels ripe for comedic exploitation. Trying to establish outer space superiority with so many problems to solve on our own soil is farcical, but like many insane ideas from the past few years, it is something like reality.

But Space Force's greatest failing seems to be that it, like its American namesake, doesn't seem to know what it wants to do. When is it part of a joke, when does it want to be taken seriously, and how does it tie the parts of this sprawling show together? Those are questions not yet answered by the first 10-episode season.

Mild spoilers for the first season of Space Force will follow.

Announced and promoted by Netflix as a potential subscription seller, Space Force is the latest offering from a duo (lead actor Steve Carrell and co-creator Greg Daniels) behind the most popular TV comedy of the last 15 years, The Office.

Carrell, in the role of General Mark Naird, is a four-star general expecting to head up the Air Force suddenly thrust into leading the new space-based branch. Naird slowly embraces the idea of joining other first-time leaders in the U.S. military, but his family isn't so receptive — his daughter (actress Diana Silvers) lashes out when forced to move during her teenage years, and his wife (Lisa Kudrow) ends up in maximum-security prison for reasons that are never fully explained.

There is quite a collection of comedic talent onhand. Insofar as the show has a "main story," Carrell spars with John Malkovich's Dr. Adrian Mallory, the thoughtful, well-dressed scientist who contrasts Naird's no-nonsense, press-forward-at-all-costs style. Ben Schwartz is the eccentric social media director for Space Force, Jane Lynch is the Chief of the Navy who delivers some punchy lines in limited action, and the late Fred Willard even appears as Naird's father, under the watch of a caretaker in his native New Jersey.

But the show ends up being far less than the sum of its parts, not necessarily through the fault of the people on-screen. Space Force can't seem to settle on a direction within single episodes, let alone for an entire season. Attempts at masquerading as a light-hearted drama are made, as Naird struggles through several tender moments as a de facto single father to daughter Erin. But there's nothing resembling real payoff, and they land instead as an artificial attempt to humanize the show's lead.

About that: Naird is often an insufferable dick, a charge levied at Carrell's Michael Scott in the first season of The Office that prompted tinkering of the character into a more buffoonish image. Even without that change, Scott would have resembled any number of office manager types throughout America, easily identifiable and hatable. But putting an ignorant dolt in charge of a fictional military branch doesn't just make Naird look bad, it forces the show to dumb down the rest of the men and women in uniform, save for a few notable exceptions.

Tonally, the show is all over the place. In an early episode, Naird is questioned at a congressional budget hearing by a lightly-altered fictional version of Alexandria Occasio-Cortez (played by Ginger Gonzaga), who asks how Space Force can justify a $10,000 fee to send a single orange on board with their spacemen. Naird gives a rare, heartfelt answer on the value of giving their astronauts something from home to hold onto, a gesture he believes is worth paying whatever it takes.

Had it not been preceded by several minutes of unserious Naird stalling and debating whether the Earth is round with another member of the congressional committee, perhaps it would have resonated more. But Space Force only seems to have enough sincerity to make it through a single scene and doesn't do an effective job at stringing those scenes together with laughs in between. Many of the jokes feel too obvious*, and when they aren't, there's either too little room for them to breathe or an abundance of unnecessary dead air.

*The worst offender on this front is Captain Yuri (played by Alex Sparrow), a Russian working for the Space Force who makes repeated, contrived attempts to use Naird's daughter to learn personal information about the Space Force leader. Making fun of the obsession over Russia's alleged connection to the 2016 election and/or current administration? That could be funny! But Yuri's intelligence is dropped so low to meet Naird's low bar that it just sort of ruins the bit. To add insult to injury, Netflix's Bojack Horseman did a better job of mocking data theft with a few one-liners in its first season than Space Force does with a semi-prominent and recurring character.

For a production that folds so many real-life politicians and their personas into the show, it has very little to say about any of them. This isn't a matter of partisan squabbling, either. There are frequent references to "POTUS" without ever using Trump's name, and most of the jokes concerning him are cheap, inconsequential jabs at issues as "monumental" as Twitter typos. Framing the show using real-life politicians — they have a character named Pitosi, for f**k's sake — without having anything of substance to say about them is gutless. Space Force suffers as a result.

Maybe that's why Space Force feels so out of place in this moment, with the real America raging in the streets over state violence against its citizens. The show's idea of spoofing an expensive new branch of the military is a big-budget, gaudy spectacle of its own. Space Force offers neither complete detachment from reality or the satirical venom to credibly mock its namesake.