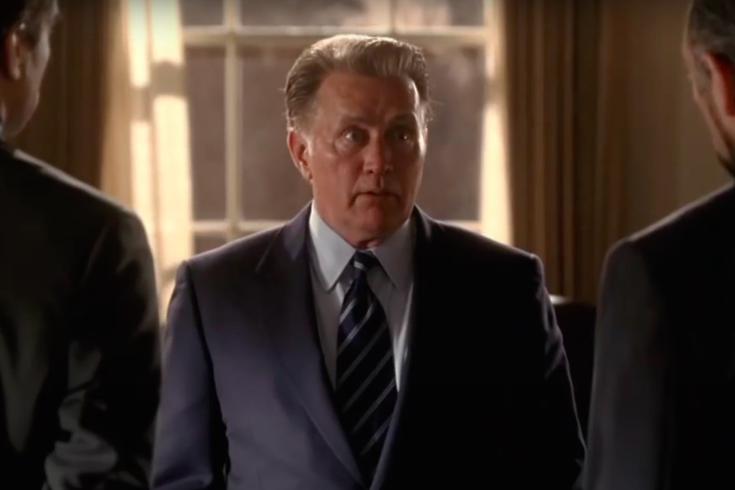 So far, we've taken a look at Seinfeld, The Simpsons, Bojack Horseman, It's Always Sunny in Philadelphia, South Park, Futurama and Community. Now we'll try and entice you with our first breakdown of a drama: the multiple Emmy-winning The West Wing.

There are 154 (or 156 with two special) episodes spread out over seven seasons. Yes, it was one of the last dramas to produce 22 full hours per season — most nowadays produce 10 or fewer.

It would be hard to find any West Wing fan who didn't believe the pilot was brilliant. Aaron Sorkin, show-runner and writer of pretty much every single one of the show's first 88 stanzas, pieced the concept and pilot together based on leftover pages he wrote for his 1995 movie The American President. The show is not entirely serialized (which is why we are including it), but there are some through plot lines that are either in the background, or in the forefront on and off throughout the series.

Sorkin and fellow creator and show-runner Tommy Schlamme left the show after Season 4, and there is a clear change in tone and quality. While the first four seasons were written around the White House staffers as a unit, in support of the president and were extremely plot driven with extraordinary dialogue, the final three seasons are much more character driven and often times take twists or turns Sorkin would never endeavor. Season 5 is fine, Season 7 is actually really good (it's all about the election to succeed President Bartlet), but Season 6 is generally regarded as being substantially worse than the high standard set in the early years.

There are lots of reasons. First, The West Wing isn't really about Democrats or Republicans (though the administration is of a Clintonian Democrat, Martin Sheen's Jed Bartlet, balancing his personal liberalism against the mainstream more conservative party of which he is a head). It's really about a group of talented people who try, really hard to do the right thing. In this day and age, seeing a vision of government and especially the White House as being competent and committed to doing good serves as an extremely valuable escape.

There is also the nostalgia factor. One of the most popular podcasts and the one that really started the re-watch phenomenon was The West Wing Weekly, which recently ended its episode-by-episode recaps in epic fashion. There has never been a better time to re-watch the series, as the pod works as a brilliant companion for viewers of the show as it involved nearly literally every single actor and contributor to the show.

And then there is the simple fact that it is great. It won four straight best drama Emmys from 2000-2003. It won 26 total, second only to Game of Thrones in TV drama history. There's a reason for the hardware. Check it out.

Currently, The West Wing is on Netflix. The recently launched HBO Max will be adding it "within the year."

We are not going to give you the three best episodes, but instead three to start with if you are skeptical or unsure of whether you'll like the show. Which means we are not, for this article, including what is widely considered the best hour, "Two Cathedrals," as it is very much a serialized story. Nor are we including my personal favorites "In the Shadow of Two Gunmen" or "20 Hours in America," because each are two parters, and we are trying to give you diversity in experience with these three suggestions. And so, here are the three episodes to fire up on Netflix first. They'll be sure to encourage you to binge the entire series:

The Crackpots and these Women

It's "Big Block of Cheese Day" at the White House. Which, well, it has to do with Andrew Jackson. I'll let Chief of Staff Leo McGarry explain it:

In case you didn't get it, the senior staff is meeting with, well, crazy people. It's in the spirit of listening to voices that never get the White House's attention. It's a nice sentiment.

A lot is going on in this episode — which makes it a perfect way to dive into the West Wing. The show is at its best when it is weaving a bevy of separate complex plots and storylines together. This one is particularly memorable for its humor and for its incredible heart at the end, when the entire senior staff assembles together to have homemade Chili cooked by the President himself.

Indians in the Lobby

There isn't much background info needed for this episode. It's Thanksgiving in the White House and the staff is preparing for a long weekend. The President is trying to figure out why — as he runs for re-election — his team is polling on where he should spend the holiday and CJ, the press secretary, is dealing with Native Americans quietly "protesting" in the lobby. Also, President Bartlet does this:

I can't think of a better scene to illustrate the sophisticated yet slapstick humor Sorkin lets shine in The West Wing. It's another episode with heart and another example of how this show is at its best when nothing is really happening. There are shootings, disasters, political scandals, big speeches and other huge moments that occur throughout the run of the series, but when the show can breath a bit, it becomes just that much greater.

There's a little extra inside baseball here — politics junkies will love it — with issues regarding whistleblower laws, congressional process and abortion, but the comedy and love between characters has never been more apparent. Amy Gardner (who happens to be Deputy Chief of Staff Josh Lyman's ex-girlfriend), is on her first day as the First Lady's Chief of Staff and a barrage of hazings and small fires hijack her day, including one of the best acted scenes of the series ever:

The episode is one of Sorkin's last — at least before he completely blows things up and leaves it to his successors in the show-running chair to clean up. We thought about including some of the great campaign episodes of the later seasons, but The West Wing really is Sorkin's show. The first four seasons stand up against any piece of television produced in the last two decades and we hope this will spur your interest in experiencing a special show from a special time in our country.