Earlier this month, the young winger finished treatments for a rare for of cancer — and now he might even return to the ice this season 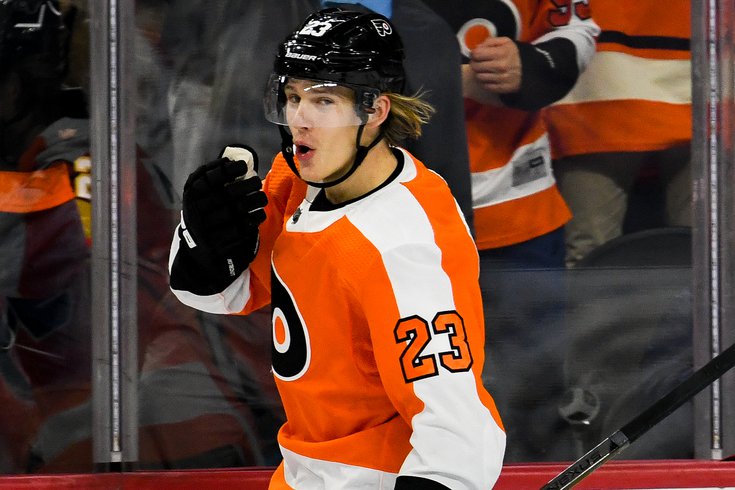 There's not a lot of good news out there right now, but this certainly qualifies.

On Wednesday, the Flyers announced that they have signed left wing Oskar Lindblom to a three-year contract extension with an average annual value of $3 million. And while locking down a talented young player is always good news for a team's fanbase, this announcement is extra special as Lindblom recently completed chemotherapy for Ewing's sarcoma at the Abramson Cancer Center at Penn Doctors have cleared him as cancer free.

Earlier this month, the fanbase (and the entire hockey world) celebrated as Lindblom rang the bell on his way out of the hospital for his final treatment and stopped to take pictures with all his nurses while giving them a signed Flyers jersey to remember him by.

Just three weeks later, Lindblom put pen to paper for a deal that will keep him in Philly moving forward.

"I am very excited to be a part of the Flyers for the next three seasons," said Lindblom. "The support that the organization, the fans, and the entire NHL has given me has been quite overwhelming. I can't wait to get back skating with the boys and being the professional hockey player I know I can be. I want to thank the Flyers for giving me this opportunity and I look forward to the day I'm back and contributing to the team's success."

Any questions about whether or not the Flyers believe Lindblom can return to form after beating cancer are gone.

Feel-good-story aside, there's good reason the Flyers locked up the 23-year-old forward. It's not like he was some nobody before his season came to a screeching halt when he was first diagnosed back in December. The team rallied in his absence, but he was one of their better up-and-coming youngsters, and at the time he left the team, Lindblom was having a breakout season. He was tied for the team lead with 11 goals and had recorded 18 points through 30 games.

It certainly sounds like a player the Flyers could use in Toronto when the round-robin and ensuing playoffs kick off next month. But that's got to be out of the question, right? Maybe just practice? Head coach Alain Vigneault wouldn't comment one way or the other, potentially leaving open the possibility of Lindblom returning this season (although given the uncertainty surrounding the pandemic, that might be wishful thinking.)

Full Fletcher quote: "I don't know what's out of the question. I wouldn't certainly put any limits on Oskar. We'll obviously do everything we can to protect him, but he's looking forward to restarting his life and his career. Whatever that means, we'll find out."

And general manager Chuck Fletcher, when asked a similar question about Lindblom's status, said that Lindblom will not only travel with the team and practice with them in Toronto, but he will be eligible to play as well.

Fletcher said Lindblom will work out with team in Toronto and would be eligible to play. #Flyers

Whether he can play or not remains to be seen, but his presence around the team during his treatments was a huge boost for morale, and he even skated with the team during Phase 2 of the NHL's reopening plan. That's positive impact is to continue moving forward whether he sees the ice during the playoffs or not, as he serves as a reminder to everyone on the team not to take anything for granted.

More recently, Lindblom was named a finalist for the Bill Masterton Memorial Trophy, which "is awarded annually by the NHL to the player who best embodies the qualities of perseverance, sportsmanship, and dedication to the game of hockey."

Overall, in parts of three seasons with the Flyers, the Swedish scorer appeared in 134 regular season games and has recorded 30 goals and 27 assists (57 points). With his new deal keeping him here for at least the next three seasons, you can expect to see those numbers rise dramatically, especially since he'll likely be in line for a more impactful role if he can return to the form he showed in the early parts of the 2019-20 season.