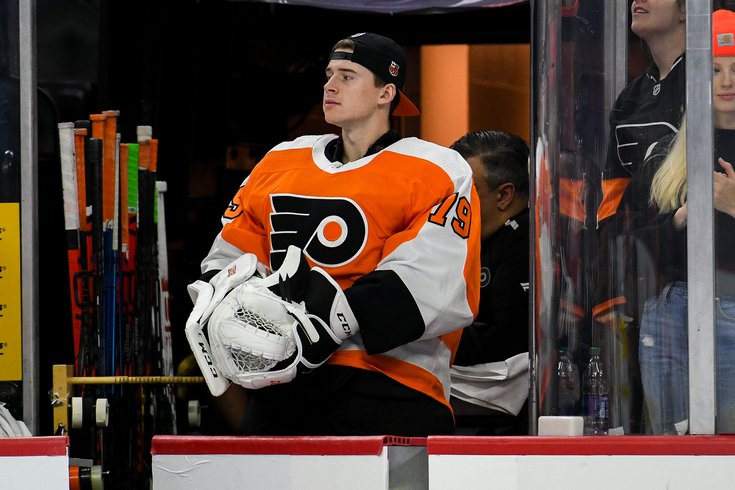 A day after mysteriously exiting a training camp scrimmage, Flyers goalie Carter Hart was absent from practice on Wednesday.

Given the current protocols stemming from COVID-19, teams aren't permitted to provide any updates on injured players, other than that they are "unable to participate." That way, it makes it much more difficult for reporters and fans to determine which players have tested positive, which would be a HIPAA violation, and which players suffered hockey-related injuries.

That "unable to participate" designation is precisely what Hart was hit with after Wednesday's practice, as the 21-year-old goalie who is expected to play a big part in the Flyers' postseason run was not on the ice at SkateZone in Vorhees, N.J. as the Flyers prepare for the Stanley Cup Playoffs.

Everyone else who wasn't on the ice (Hart, Bunnaman, Ustimenko) got the "unable to participate" designation.

(For those wondering, Couturier's absence for "personal reasons" is reportedly due to his wife going into labor, so nothing to worry about there.)

Following Tuesday's scrimmage, there was no official word from head coach Alain Vigneault, who was not coaching during the scrimmage (that's left to the assistant coaches), but Ian Laperriere did tell reporters that he "noticed that [Hart] left the ice, that's all. That's all the league wants us to say and that's all I know."

On Wednesday, Vigneault wouldn't comment specifically on Hart's injury, but told reporters that he's "not concerned" with Hart's health heading into the restart.

Hockey injuries are typically vague — upper- or lower-body is about as specific as they come — but this is a sign of the new normal in the NHL during a pandemic.

Not everyone, however, was afraid to speculate on Hart's abrupt departure, which at this point doesn't seem COVID-related. Forward Kevin Hayes was asked about it after practice and downplayed the injury, suggesting it is something minor and more short-term than the worst-case scenario that played out in Flyers fans heads when news first trickled out that he had left the ice.

"I didn’t see what happened," Hayes said during the video chat. "I didn’t even realize he left until someone on the bench said it. I think it’s nothing too serious.

"Obviously it’s important to get in shape and get game ready, but if you have something that’s minor that you don’t want to push, it’s not a big deal to get off the ice like that. We’d rather have him be at 100 percent than pushing hard at 85, 90 percent. Probably a smart decision by him. (But) I don’t think it’s anything major."  [delcotimes.com]

So what could that "minor" injury be? According to Flyers in-game analyst Colby Cohen, it's back spasms that should only keep him out a day or two, but nothing's been confirmed by the team for the reasons noted above.

Im told that Carter Hart had some minor back spasms and it locked up a little during skate today. Nothing major or Covid related. I would think he’d back on the ice in a day or two. #Flyers https://t.co/25BdzSyS2l

Obviously, that would be good news for the Flyers. Given the success of the young goaltender in his second NHL season, the team would prefer to have him back for the playoffs, although they do have a capable backup in 13-year veteran Brian Elliott. Here's a look at how their numbers this season stack up...

For now, Flyers fans will have to hope that the reports of Hart's injury being minor are accurate, but they do have some time before the games actually matter. The round-robin doesn't begin until August 2nd, with the actual playoffs not starting until at least August 11th. And while the Flyers would obviously love to sweep their way through the round-robin and earn that top seed in the Eastern Conference, as we've noted before, even if they lose all three of those games, they wouldn't be in any worse of a position than they were when the season was stopped.

Still, it would be nice to use those three actual games as a way to get the young goalie up to game speed before the real playoffs start in a couple of weeks. Stay tuned as we wait for more news on Hart's status, although we likely won't find out anything official until he, without warning, returns to the ice one day.

That's just the way this all works now.