'I guess we got to get to September,' head coach Alain Vigneault said on Wednesday. 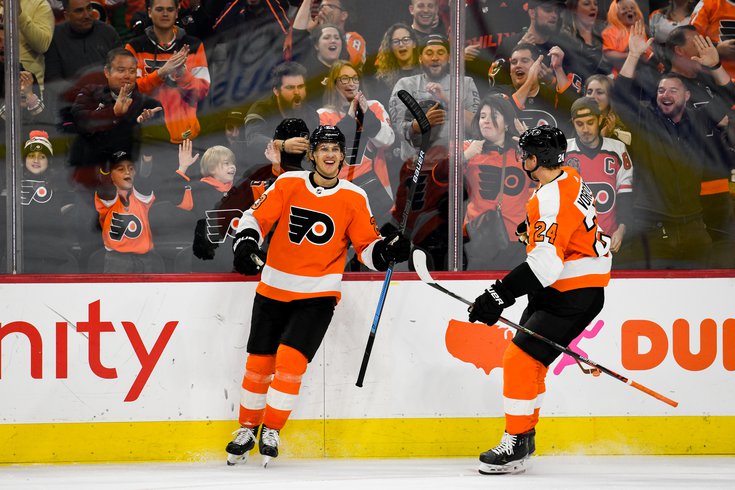 The Flyers returned to action last weekend and picked up right where they left off when the NHL season was halted back in March, with a win. Carter Hart looked brilliant in the 4-1 victory over the Bruins — and will be getting the day off on Thursday when they play the Capitals — and the team got scoring from all over the place, with depth guys stepping up on what was a quiet day for the Flyers' top line.

And that was enough to give them an opening win in the round-robin as they vie for the top seed in the Eastern Conference.

Unfortunately, the Flyers lost forward Michael Raffl in the process to an injury that sounds like it will keep him out for a significant amount of time. The good news is the Flyers have some players ready to step in and they've already identified promising prospect Joel Farabee as the guy to fill in for Raffl in the short term.

But if Raffl is still out when the calendar turns to September — and if the Flyers are still playing — they could get a massive boost, both on the ice and in the locker room, in the form of Oscar Lindblom.

That's right, after being diagnosed with Ewing's sarcoma back in December and undergoing months of treatments, head coach Alain Vigneault said on Wednesday that he was told Lindblom, who finished his last round of chemotherapy at the Penn's Abramson Cancer Center last month, could return to the lineup in September.

Currently, Lindblom, who signed a three-year extension with the Flyers last month, is home in Sweden working out and staying ready, and the 23-year-old forward is expected to join the team in Toronto this week prior to their final seeding game on Saturday.

"I'm going to Toronto on Friday and join the rest of the team," Lindblom told Swedish media outlet Gefle Dagblad on Tuesday, according to NHL.com. "We will see how it goes. I feel that my conditioning is getting better and better each day. We are in the playoffs and right now we are playing games to determine our seed.

"It's fantastic being back on the ice after all that's happened."

Lindblom was around the team during their training camp in July and even participated in some on-ice workouts. Vigneault knows that whenever Lindblom rejoins his team, it will be a huge boost. After all, he's already seen him impact on the club throughout the season — and knowing that he's now cancer-free and could possibly join them in the playoffs can only raise their spirits even higher.

"I think just like when we saw Oskar throughout the season, knowing what he was going through, the amount of positiveness and great smile that he had. It would no doubt be an extra boost for our group right now," Vigneault said Wednesday. "I know Oskar went home. He wanted to go and see his family after he was cleared of cancer. I do expect him in the near future to join our group in Toronto at some point."

Vigneault also explained why he believes September is the key date for Lindblom to possibly return. Originally, when Lindblom was diagnosed, the Flyers coach asked the doctors if there was a chance he would be cleared for the playoffs (when they were originally scheduled to begin in April). He was told no, but that if everything went well, which it did, Lindblom would be cleared in time for training camp in September. Due to COVID-19, the schedule has obviously been adjusted, and the playoffs will now carry into September, meaning there's at least a chance he gets on the ice if the Flyers can make a deep run in their quest for the Stanley Cup.

"When Oskar was diagnosed with cancer, I had numerous talks with our doctors about is there a chance I can get him back for the playoffs," Vigneault explained. "Obviously the answer was no, he wouldn’t. Come next training camp in September, he should be back if everything went the way they thought. Things have gone the way they thought. This year obviously with the stoppage in play and COVID factor, the season has been stretched out. September is a little less than a month away. I was told come training camp he would be able to play in September.

"I guess we got to get to September."

If there already wasn't enough reason for the Flyers to want to extend their season as long as possible, getting Lindblom back on the ice this year is as good a reason as any.

The question now becomes, after eight months away from game action, would it be the smartest move to simply plug Lindblom back into the lineup?

Prior to his diagnosis, Lindblom was tied for the team lead with 11 goals and had recorded 18 points through 30 games, so he definitely has something to add on the ice. But if the team doesn't want to rush him back or tinker with something that's working — if they make it to September, things are clearly going well — simply having Lindblom around the team on a regular basis again could be the boost this team needs to win the city's first Stanley Cup title in 45 years.

"I’ve got to say honestly, initially when the diagnosis was made and we found out how serious it was, I wasn’t quite sure how we were going to react and how the season would unfold," Vigneault said. "That’s why I mentioned this when I was nominated as one of the guys for Coach of the Year, that this was a special one in my heart and in my mind with what our team went through and how we were able to pull together, focus on doing our jobs.

"Every time we saw Oskar, I think everybody’s spirits were that much more upbeat. Did we rally around Oskar? There’s no doubt that him getting better, him fighting the cancer, us being aware of the situation, really brought positiveness to our group. For me it was a hard moment. I liked the way our group stayed with it, stayed positive. I think you would have to ask the players what they thought of it. That would be my best answer there."

The players certainly seem to think it will help.

"I think so," defenseman Matt Niskanen said last month when asked if Lindblom joining the team in Toronto would provide a boost. "Everyone loves him. He’s just the greatest kid to have around. He’s a hell of a player. Normally in playoffs I would say you don’t need any extra motivation. That’s a nice little story that everybody can rally around.  We think about him. We talk about him all the time. Oskar’s with us in this. Everyone feels that. We talk about it, so what a great story that he’s been just a champion through this. We can’t wait to see him again."

"Anytime we’ve got a chance to see him or he would come to a game, it was a little bit more motivation," added captain Claude Giroux. "The kid had been through a lot. We want to play well for him and for ourselves. He’s really big part of this team."

Come September, he could be an even bigger part of the team. But starting later this week, the team will at least have the young forward around to provide that little extra bit of motivation.