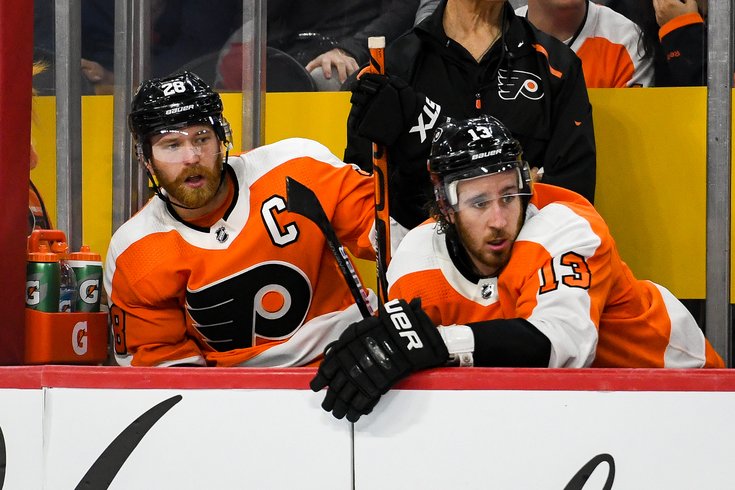 Claude Giroux (28) and Kevin Hayes (13) on the bench during a Philadelphia Flyers game.

It's been elusive in Philadelphia, as the Flyers have played in just three playoff series — each of them one-and-done losses — in the last seven seasons.

For anyone who's watched the Flyers this season, at least recently, there is definitely some playoff buzz around a team that is not only dominating at home, but also finding its footing on the road as health and consistency start to set in.

“It feels different (this year),” Travis Konecny said (via the Courier Post). “We’re definitely right there and there is that different energy in the locker room right now. It’s not like we believe…we know we belong in there and it’s just a matter of doing everything we’re told each and every night and buying in. We’ve got the group to do that.”

As of Friday morning, the Flyers have a (relatively) firm grasp on a Wild Card spot with four points of clearance between them and the trailing Hurricanes. More importantly, with 24 games to go they are just three points out of the second spot in the Metropolitan.

There is a ton of time left, and pretty much anything — from ascension to a true contender to falling off the map — is theoretically possible between now and April.

However, those three points could very well be 30 points, as the Flyers are stuck in the best division in hockey. More on that from NBC Sports Philadelphia's Jordan Hall:

At the All-Star break, the Flyers were in sixth place of the Metropolitan Division but would have been in first place of the Pacific Division.

Such is life with four divisions. There's a chance one could be loaded and another not so much. There should be no problem with that.

Unfortunately for the Flyers, the Metropolitan Division happens to be the deepest in hockey this season. The Flyers are projected to finish with around 98 points and could be on the outside looking in at the playoffs. If they take care of business the rest of the way and continue to play well against the division (10-4-4 vs. the Metro), they'll be fine. [NBCSP]

To put that in some perspective, the Flyers are a whopping +4000 according to Bovada to win the Metro — which they trail the Capitals by eight points in. By comparison, that's roughly the same difference in division-winning odds between Winnipeg and St. Louis, 11 points apart in the Central.

Still, despite them being cursed by their divisional alignment, The Athletic projects the Flyers have an 80% chance of making the postseason this year, and expects they'll post around 100 points. Sadly for Philly, those 100 points could still net them a Wild Card spot even though — according to The Athletic — they may have the ninth most points in hockey.

Another less but still optimistic projection, this one from hockeyreference.com, provides the Flyers a 68.5% chance of playing in the postseason with 44.2% of that as a likely Wild Card entry. They have the sixth toughest schedule remaining of Eastern Conference teams, according to the site.

Getting out of the Wild Card spot is important, of course, as those two slots will play the top team in each division respectively in the first round of the playoffs. The Flyers have never finished higher than third (they did it twice) in the Metro since the divisions re-aligned in 2013.

There is certainly an argument to be made that their rigorous in-division track to the playoffs could battle test them to win their first playoff series since 2011-12, when they lost four in a row to the Devils in second round.

They have just a 2% chance of winning the Stanley Cup (according to both The Athletic and Hockey Reference) — and championship aspirations may be a bit aggressive for this year's team, but the trajectory is definitely pointing in the right direction.