Sixers and Flyers have never been better at Wells Fargo Center, and it isn't even close

But that doesn't mean they'll do anything in the playoffs 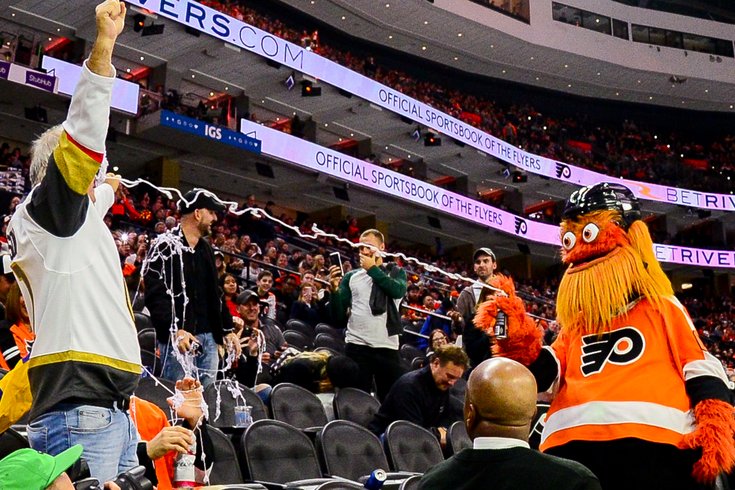 Gritty spraying a fan with silly string a Flyers home game this season.

Winning has never been more of a sure thing in South Philadelphia.

Planning to go to the Wells Fargo Center to catch the Sixers or Flyers as they look to make a push for the playoffs this spring? Well, there's a 80.5 percent chance you see them win.

For whatever reason, both of the current inhabitants of the arena on Broad Street are posting the most ridiculous home and away splits in the history of the building (which opened in 1997).

At home, the 76ers score 111.9 points per game. On the road they score 105.5. Defensively, they suffocate opponents on their home floor, allowing only 101.8 points per game, but they get smoked in every other arena, allowing 110.5 per contest.

With the hardwood lifted to reveal the ice underneath, the same ridiculous splits characterize the Flyers' season. At home, they have scored 36 more goals than their opponents — more than one per game. They have only played five home games without earning a point. On the road they've been outscored by 23.

The two tenants playing winter sports have averaged a 57.8 winning percentage together over the last 24 seasons. Their 80.5 percent mark right now is by far the best of this era. Combined, the Sixers and Flyers have won 45 games at the Wells Fargo Center this season. If they can win just 11 of their remaining 23 home games, they'll set a franchise record (since the Spectrum closed its doors in 1997).

Here's a look at the nine times the teams have combined to win more than 60% of their home games in one season:

In 2012-13, despite winning 60 percent of their home games, neither earned a playoff berth. Which makes sense  — we are only giving you half of the information. The interesting part of this home dominance is it doesn't seem to lead to any particular trend of playoff success when the teams do reach the postseason. Perhaps that is due to the road woes that almost always accompany the home success — and perhaps it is due to other factors — but as can be seen above, the Sixers and Flyers have played like an average team at home in the playoffs following their top home regular seasons.

The hockey playing team in the duo has pretty much no shot at getting home ice advantage as they currently are on the cusp of the final wild card berth in the East. The Sixers are currently in the fifth spot in the Eastern Conference, with many surmising they will need the 4-seed or better to have any kind of chance in the playoffs, based on their wildly differentiated performances based on location.

"It sure seems to help," Sixers head coach Brett Brown said this weekend. "We do love playing at home. We've always got great memories coming back here and we are sort of used to winning at home. We love playing in front of our crowd and we feel a responsibility to perform in front of that crowd. Just after our losing on the road, it does feel good to come back and win."

Unless either team locks up a No. 1 seed (which is basically impossible for both the Sixers and Flyers), they'll need to figure out how to win on the road if they want to make any kind of deep playoff run.

Still, it's nice for fans to know they really do make a difference. At least in theory.