What they're saying: The Sixers are a mess, plus some trade deadline grades

Philly is having issues both on and off the court, but their moves at the deadline aren't enough to turn it around 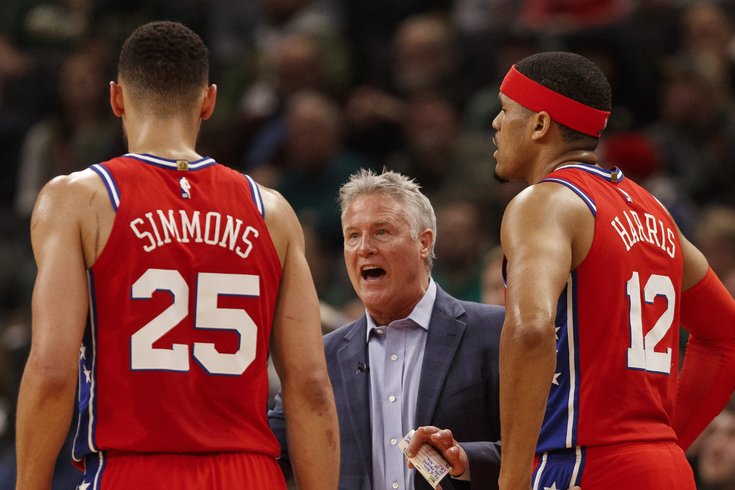 There's been talk of issues inside the Sixers' locker room. Their best player isn't having fun and can't figure out his place in the offensive scheme. A relative newcomer had to lead a players-only meeting. And those watching them play on a consistent basis are left scratching their head as a team with NBA Finals expectations limps toward the All-Star break in sixth place in the East.

And that was before Thursday night's loss to the Bucks, which capped off an 0-4 road trip for the Sixers, who are now 31-21 on the season and 4.5 games* out of the fourth seed that would allow them to host at least one playoff series.

*Technically the Sixers are four games behind the Heat for the fourth seed, but since the Heat already own the head-to-head tiebreaker, they'll need to pass them in the standings. A tie wouldn't help.

Between the Sixers' struggles on the court, the question marks off the court, and the arrival of two new players who could bring some much-needed shooting and ball-handling to their offense, it's been a busy couple of days for Philly. And they won't have time to regroup as they return to the Center on Friday night to host the Grizzlies in the second game of a back-to-back.

Here's a recap of our coverage of what was a busy last 48 hours for the Sixers:

• A speculative look at the Sixers' rotation post-deadline

As you can see, there's been a lot going on. Now, let's take a look at what the national media is saying about the Sixers. From a legend comparing them to the Cleveland Browns to the current franchise center's post-game comments, and even some trade deadline grades, here's all the latest...

'The Cleveland Browns of the NBA'

The last time Charles Barkley and Shaquille O'Neal called out Sixers center Joel Embiid during a pregame edition of "Inside the NBA," Embiid went out and had one of his best games of the season.

That was not the case on Thursday night following Chuck and Shaq taking the Sixers and their big man to task both before their nationally televised game against the Bucks and during halftime. Prior to tip, Barkley called the Sixers the "softest, mentally weakest team" and even compared them to the Cleveland Browns.

Chuck has some thoughts about the Sixers. 👀 pic.twitter.com/VeVu4cxvw7

"They are the softest, mentally weakest team that had a bunch of talent. They are the Cleveland Browns of the NBA. They got a lot of talent, and they talk the talk, and that's it."  [twitter.com]

And after a first half that saw Embiid struggling on both ends of the floor, O'Neal took his turn ripping the big man:

N.J. native Shaquille O’Neal, Barkley’s teammate on “Inside the NBA,” doubled down at halftime, targeting center Joel Embiid in particular in his breakdown of the first half.

"He is playing S-O-F-T (defense),” O’Neal said before breaking down Embiid’s offense with a baby voice. “On the other end, he’s not playing with force. He’s looking for the foul, he has a little band-aid on his little hand, he wants the ref to call the foul. The ref didn’t call the foul, so he runs back on defense like a little baby and lets this guy (Robin Lopez) score on you.”  [nj.com]

Are we having fun yet?

Unsurprisingly, the mood wasn't great in the locker room following the loss to the first-place Bucks. Al Horford said the loss "puts a lot of things in perspective" as he continues his campaign for the most cryptic player on the team. (I'm sure no one will read too much into those comments.)

Horford also added that he thinks "good is going to come out of this." And given Embiid's postgame comments, that better happen sooner than later. Embiid said he needs to get back to having fun out there, and if you've been watching the Sixers recently, it's not hard to tell that that hasn't been the case lately. Embiid's looked disinterested, and while some of that might have to do with him not playing at 100% due to his still recovering left hand, he swears he's as locked-in as ever.

"I'm trying to get back to the fun Joel," Embiid said. "Smile a little more. The whole season I told myself I was going to be serious. I felt like everyone looked at [me] in a way that I'm moody or I might not care. I do. I want to win. But at the same time, I try to have a different attitude. Obviously, it hasn't been working. Gotta go back to that fun Joel, fun personality. [But] still locked in. Try to help us any way I can."

Sixers coach Brett Brown and several of Philadelphia's players said that while it was another loss, this one felt a little different. Unlike some previous defeats, forward Tobias Harris said he thought the team played with more effort against Milwaukee and that shots just weren't falling. Like Horford, he vowed that Philadelphia would come out of this slump a more connected bunch.

"You do find out a lot about culture when you go through ups and downs," Harris said. "It's how you get through it. I believe this team is a great team and a team that is destined for excellence. We hold ourselves to that standard. We'll continue to push each other and be ready for the next one."  [espn.com]

It seems Embiid and the fans have something in common, because no one is enjoying watching Sixers basketball at the moment.

Maybe a win over the Grizzlies at home on Friday night will be the start of a turnaround for the Sixers, who are currently riding a four-game losing streak and have lost five of seven. Otherwise, the post-game questions could get a little awkward for this group...

Now let's turn our attention to some more positive Sixers news. Had it not been for all the losses and off-court drama, there likely would've been a lot more talk about what the team did at the deadline, acquiring a pair of players from the Warriors in Alec Burks and Glenn Robinson II that, while not altering the entire landscape of the team, should definitely help in some of the areas where this team has struggled.

Over at Bleacher Report, Grant Hughes listed some winners and losers from the trade deadline, and although the Sixers didn't make his list either way, the two players they acquired were considered winners:

The Warriors technically could occupy this spot, but we already let the Grizzlies be winners and losers, and it feels like you can only go to the well once on that move. Besides, the three future second-rounders Golden State got from the Sixers for Alec Burks and Glenn Robinson III are all likely to fall between 45 and 60, which means they may never return any value at all.

Besides, the wins for Burks and GRIII are so much easier to explain.

These two inked cheap, short-term deals with the Warriors, revived their floundering careers on what turned out to be the worst team in the league and now head to a potential contender desperately in need of the perimeter scoring they provide.

Isn't this exactly what journeyman wings hope for? To validate their place in the league and wind up on a big stage with the chance to prove even more?

It's possible that neither player shoots consistently enough to make a difference for Philly. And the Sixers still need pick-and-roll playmaking, which neither Burks nor Robinson is known for offering. But that doesn't change the fact that these veterans went from being virtually out of the league to playing potentially significant roles on a winner.  [bleacherreport.com]

After reading the above quotes coming out of the locker room last night, are we really sure they should be considered winners?

Over at The Ringer Presented by Spotify, D.J. Foster graded every trade made ahead of the deadline, and according to him, the Sixers did pretty well for themselves.

The 76ers were a few bounces on the rim away from an Eastern Conference finals appearance. Doing something drastic and trading Ben Simmons or Joel Embiid before they get another crack at it, especially with Al Horford in tow, would have been overly hasty. Adding Burks (37.5 percent from 3) and Robinson (40 percent from 3) can provide some of the spacing and scoring that often goes missing when Brett Brown reaches deep into his bench. There was bigger game on the market, but this addresses the team’s most glaring needs without sacrificing any core pieces, which is standard operating procedure for contenders.

CBS Sports' Colin Ward-Henninger thinks there's good and bad in the Burks/Robinson trade, but ultimately he gave the Sixers an even better grade.

Burks and Robinson aren't the most eye-popping names on the trade market, but they directly address one of Philadelphia's biggest needs: Shooting. Entering Wednesday night, the 76ers were 21st in the league in 3-point percentage, and 24th in 3-point makes per game. Robinson is shooting 40 percent from the 3-point line this season on a career-high 3.5 attempts per game, while Burks is making 37.5 percent of his 3-pointers on nearly five attempts per game. Both are averaging career-highs in points with the injury-plagued Warriors. With Joel Embiid and Ben Simmons drawing so much attention on the inside, the 76ers needed to upgrade the shooters around them, and they've done that with this trade. Both Burks and Robinson are in the 56th percentile in catch-and-shoot situations, scoring 1.08 points per possession, according to Synergy Sports Technology, which means they should be a good fit as floor-spacers.

Robinson grades out poorly this season as a defender in terms of metrics, but that's partly due to the Warriors' struggles as a team on that end of the floor. He has the strength, length and size to be a quality perimeter defender off the Sixers' bench. Burks isn't known for his defensive prowess, but he adds another ball-handler and playmaker to Philadelphia's second unit. With added offensive responsibility this season, Burks has scored 0.92 points per possession as the pick-and-roll ball-handler this season, according to Synergy, which ranks in the 72nd percentile of the league.

Overall, the Sixers added two sharpshooting wings who can certainly help in a postseason series for three second-round picks. That's a win for Philly, who has disappointed this season despite a 31-20 record.  [cbssports.com]

For what it's worth, Colin gave the Warriors an "A" for their half of the trade.

We'll take what we can get

Sports Illustrated's Rohan Nadkarni had the Sixers listed as one of the deadline winners. Kind of. Sorta. Maybe?

A Winner But Not a Huge One: Sixers

Philly added some depth with the acquisition of Glenn Robinson III and Alec Burks from the Warriors. They should provide a little shooting off the bench, though they won’t be worlds better than the departed James Ennis. That’s not nothing.  [si.com]