A speculative look at the Sixers' rotation post-deadline 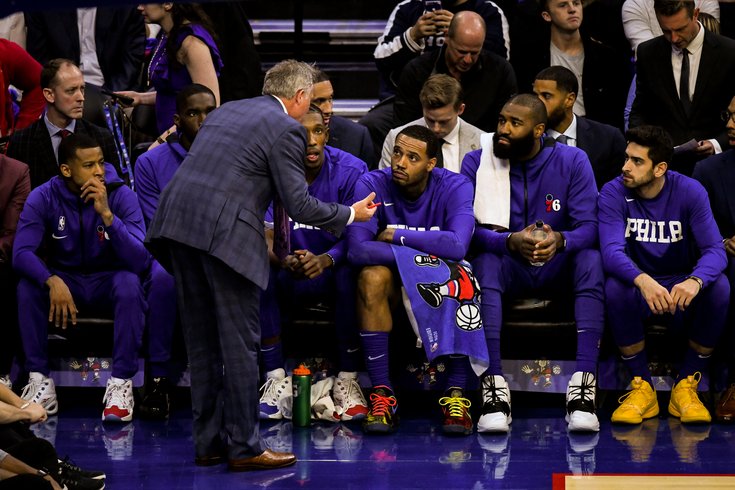 The 2020 NBA trade deadline has come and gone, and the Sixers did what most expected, focusing on small upgrades along the margins instead of any sort of major move. Alec Burks and Glenn Robinson III were standouts on a very bad Golden State Warriors team, but in smaller roles in Philadelphia, they should help the process of tying together the NBA's most maddening team.

We don't yet know what sort of roles the Sixers want their new guys to play, and projecting too much before we talk with GM Elton Brand would appear to be a little reckless.

So, let's get reckless.

Starting lineup: what could happen

Starting lineup: what will probably happen:

Much to the chagrin of many Sixers fans, I still can't see the Sixers breaking up this starting five yet. The Sixers made it clear to teams they spoke with leading into the trade deadline that their starters were not on the block, and that they intended to try to make this work with the pieces in place. If things continue to go poorly, Brett Brown will basically be forced to make the move, but it's not something I see him being proactive about, for better or worse.

The more controversial stance here is placing Furkan Korkmaz, rather than Matisse Thybulle, into a sleeker starting lineup. I think if you're going to move Horford out and place somebody else in with the remaining four, you have to provide that group with skills that aren't already there. Thybulle may be a defensive ace but he doesn't really do that, while Korkmaz provides you with shooting, a pinch of ball-handling, and more offensive juice than his counterpart.

I think it's probably a moot point. The Sixers don't seem inclined to give up on this experiment with the starting group yet, and turning Horford into a true backup center would honestly be a little absurd. If Embiid's minutes aren't going to change, that would offer him roughly 16 minutes per night, which is not exactly what they paid him all this money for.

Hold onto that thought for a second.

First sub shift: what could happen

As discussed Wednesday, to get proper value out of Horford on offense, the Sixers are going to have to tinker with some lineup changes on the bench. Simply bringing in Burks early should help here. Their new pickup has legitimate pull-up ability from beyond the three-point line, and if you wanted to build a lineup around pick-and-rolls with the Burks-Horford combo and spread the floor around them, you might unlock Horford's best on offense.

These lineups are going to hinge on a few factors:

My assumption is that the Sixers acquired Burks to play the Neto/Burke role, only if they were better. He probably shouldn't be running point on a normal-ish team, but next to one or more of Philly's perimeter starters, I would be comfortable letting him run those groups.

If they like Burks enough to hand him a sixth-man sized role, and if they trust Burks to run the second unit as more of a point guard, I could see Option B as a realistic outcome. Philadelphia would have to figure out whether they have enough spacing in that group and would run into some of the same problems they have now with regards to developing Simmons as a screener while bringing Horford into a more important offensive role.

As a bonus, if you bump Harris out of that group, you can potentially put him on the floor for more minutes in Embiid-led lineups, which need as much shooting as possible. Once again, however, I assume the most conservative possible option will be how they roll here.

Second sub shift: what could happen

Burks-Richardson-Thybulle-Scott-Embiid, with Robinson as a flex option

I think this is the most interesting pivot point for the Sixers. Let's pretend for a moment that they do decide to move Al Horford to the bench. You still have to find a way to get good value out of him, which doesn't work if you keep minutes distributions and rotations the same — Horford playing backup center with no alteration to Embiid's usual routine

A move to the bench for Horford might mean chopping a few of Embiid's minutes during the regular season, giving Horford a little bit of room to stretch his legs.

Embiid tends to sub out between the five-six minute mark in 1st/3rd quarters, re-entering in the closing minutes of 1st/3rd quarters and playing as the lone big through the beginning of 2nd/4th quarters. Those minutes are almost exclusively with backup guards and built around his post-up play. Now that the Sixers have a better version (Burks) of the guard they've wanted to lead those units, Horford could get some of the pick-and-roll/pick-and-pop opportunities he hasn't received up to this point by leaving him out on the floor after Simmons exits for his first rest.

So we circle back to the same point — it seems very unlikely Horford is sliding into a sixth-man role, partially because you're not getting a lot of value from him there, either. But that doesn't mean the Sixers can't change what the group looks like around Embiid.

I especially like any option with Harris at the four and Burks/Richardson in the backcourt. It gives you multiple pick-and-roll handlers, credible shooters, and the option to flex the other wing in that group depending on the matchup. Need some more defensive steel? There's Thybulle. Need shooting? Korkmaz. Robinson splits the difference between the two poles, and I would assume the Sixers want to give the new guy a shot.

But the Sixers held onto Mike Scott at the deadline, and Brown seems especially determined to play him rain or shine. Given chances to play small-ish ball in the past, Brown has also shied away from them more often than not, preferring to play more "traditional" power forwards, which is one of my biggest gripes with his rotation choices.

End of the day, I think we end up seeing Burks step into the Neto role with the rest of the pieces staying the same. I think it would be a shame to think about it in such narrow terms because they finally have enough bench depth to actually toy with some different looks from game-to-game.

Closing group: what will probably happen

When the Sixers made calls around the league at the trade deadline, the message other teams received was pretty clear: the starters and Matisse Thybulle are off of the table. They didn't show any interest in moving on from this ultra-big experiment, choosing instead to tinker around the fringes and trust this group would be enough to get it done from mid-April onward.

I am inclined to take them at their word there unless things really go off the rails heading into the All-Star break. Even then, the solutions are imperfect. Matisse Thybulle's shot is a question mark along with his handle, Furkan Korkmaz might get played off of the floor defensively, and banking on guys they acquired at the deadline for peanuts to be part of their crunch-time five would be ambitious to say the least.