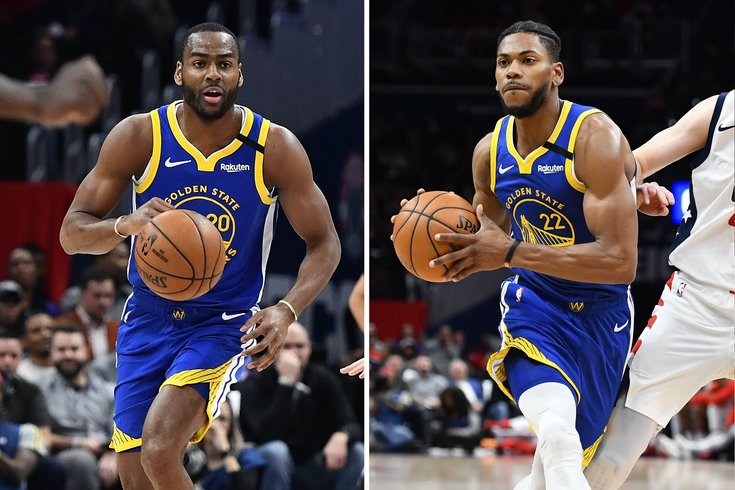 The Sixers have acquired Alec Burks and Glenn Robinson III from the Golden State Warriors.

The Sixers are acquiring Alec Burks and Glenn Robinson III in a trade with the Golden State Warriors, a team source confirmed to PhillyVoice on Thursday morning. The trade was first reported by Shams Charania of The Athletic.

In exchange for Burks and Robinson III, the Sixers will send a trio of second-round picks from Dallas (2020), Denver (2021), and Denver.

The trade brings the Sixers some much-needed depth and scoring off of the bench, with Burks, in particular, offering some intrigue for Philadelphia. In the midst of a resurgence following a few injury-plagued seasons in a row, Burks offers the ballhandling ability to run the offense for stretches, and a bounce-back year from deep (37.5 percent on nearly five attempts per game) will allow him to hold down either guard spot in the backcourt. And his size, listed at 6-foot-6, should help him fit in with an ultra-big team.

At his peak, Burks was a promising combo guard with the Jazz who earned a four-year, $42 million deal from Utah way back when. The big question with Burks, though, has always been whether he could stay healthy enough to stick. He hasn't appeared in more than 64 games since 2013-14, and lower leg injuries have slowed him down after a promising start to his career. With more time and touches in Golden State, he has found his footing, averaging over 16 points per game for the Warriors, albeit on a relatively inefficient 40.6 percent from the field.

Sixers fans may be more familiar with Robinson, who had a short stint here during the process years, and his shooting touch is much needed — Robinson III is a career 37.6 percent shooter from deep and has connected on exactly 40 percent of his attempts from deep this season, and he has the athleticism to serve as a nice target for Ben Simmons on cuts, lobs, and in transition.

Still just 26, Robinson III has the outline of a potential rotation player, though he's still a bit more of a theoretical contributor than anything. He has always had prototypical size, allowing him to switch across multiple positions, and the son of former NBA wing Glen "Big Dog" Robinson is at least making the attempt to improve on that end, sitting alongside Draymond Green in film sessions to pick his brain.

The way that he thinks about the whole game is really strategic, step by step. Every play he can tell you 10 to 15 things about one play, it's crazy. So to be able to break our defensive progression down like that, I don't think I've seen that...playing with Dray I'm learning things from him every night and he's making it easier on me just by talking. We all know how loud he can be. So he definitely is creating and making it a little bit easier for me on defense rhythm.  [NBC Sports Bay Area]

Whether that has made a material difference is another story, but so long as Robinson III continues to make shots at a high clip, he should fit in just fine in Philly.

There are some complications to doing a two-for-none deal with the Warriors, mostly that it can't legally be executed until the Sixers can absorb those two players into open roster spots. As of right now, the Sixers are remaining tight-lipped on what corresponding roster moves will be made in order to make that happen, which you can interpret as the Sixers either looking for more moves and/or figuring out the natural candidates to part ways with should they fail to make any more moves before the 3 p.m. deadline.

The best news for Philly is that this increased depth comes at a price that still leaves them with some assets to toy around with if a bigger move materializes between now and 3 p.m. Thursday. None of the most valuable second-round picks in Philadelphia's arsenal — including 2020 second-round picks owed to them by the Knicks and Hawks — were included in the trade. Those picks, in addition to the firsts they have left to trade after a couple years of wheeling and dealing, give them some ammunition to go after another rotation piece.

Whether they're able to make anything work financially is a different story. With Robinson III and Burks are on cheap contracts, the Sixers do have the ability to outright cut two players without going over the luxury tax, which would leave them with around $1.18 million of space under the tax. That isn't a whole lot of wiggle room to work with, so we'll see if Philadelphia can pull off anything else or if this is the final meaningful move of the year.