What is the Sixers' No. 1 need at the trade deadline? 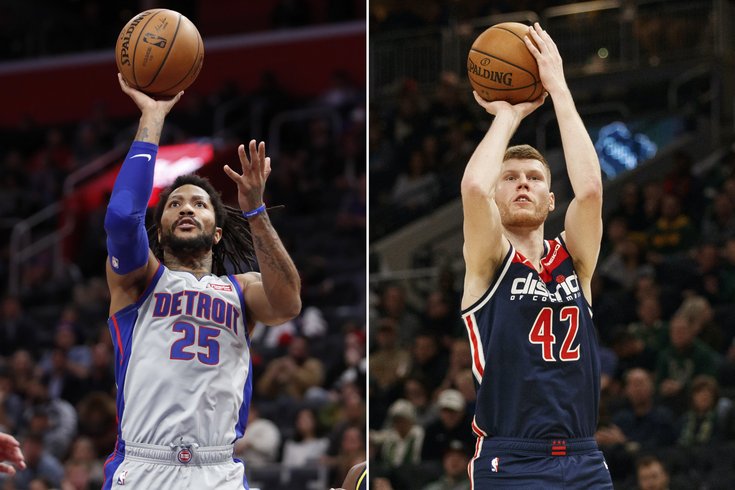 The primary issue for the Sixers seems pretty clear as we approach the trade deadline — they simply cannot score. Fifty games into their season, Philadelphia is closest in offensive efficiency to the Sacramento Kings, an 18-31 outfit that routinely snatches defeat from the jaws of victory. Their defensive engagement has dropped at times, but they have consistently hovered in the elite territory on that end, not quite living up to their talent but certainly not offering much room for concern there.

Anyone expecting a major fix before the trade deadline passes will likely be left wanting, but the Sixers have one last big opportunity to change their trajectory before the season ends. The way I see it, the Sixers have two basic needs that need to be filled, and given the chips they have to deal, they will probably have to choose between one or the other, if they can fill one at all. Here's the case for both.

The Sixers need a ball handler

The Sixers are grotesquely structured for a team playing basketball in the year 2020, and a quick glance at any number of playoff teams shows you how the Sixers have systematically ignored the guard position for years. Every team ahead of the Sixers in the Eastern Conference playoff race either has a dominant wing player or options for multi-guard lineups that put pressure on opposing teams. Even teams on the fringes of the playoff race in both conferences bring guards off of the bench who put pressure on opponents — I would not want to be the team paying Dennis Schroder $15 million a year, but the Sixers would kill to have someone who could bring the same juice he does for the Thunder off of the bench.

The Sixers have a collection of guys who are merely okay at a lot of these things. Tobias Harris is great from the mid-post and dangerous as a catch-and-shoot player, but he is not inspiring fear as the hub of an offense. Josh Richardson is passable enough as a pick-and-roll player, but there's a reason Miami's offense floundered when he was the main ball handler. Ben Simmons' struggles to create have been discussed to death, and the team shifting him into more of a screening/rolling role in recent weeks shows their understanding of his limitations.

There is a significant difference between having a good handle for a guy who is 6'7" or taller and just having a good handle, period. Players who fall in the latter category can create separation when there isn't any to be had, win matchups in isolation without the assistance of a screener, and generate open threes or trips to the free-throw line because of the pressure they put on opponents.

When they signed Al Horford, the Sixers went all-in on trying to beat the Milwaukee Bucks specifically, but part of that bet included a belief that the pieces already in place could shoulder the offensive burden themselves. With Simmons still a non-shooter and Embiid hampered by poorer spacing than ever, they have proven unable to score at a level good enough to contend.

"But Kyle," I can hear you saying, "doesn't your last sentence prove they need shooting above all else?"

The problem, so far as I see it, is that the Sixers have had no backup plans, no fallback options should these shooters fail to come through for them. Even elite shooters have down periods — just ask Danny Green, who was useless against the Sixers in last year's second-round series. A shooter on his own is only as good as his made shots. A ball handler can create better shots for all five guys on the floor.

Sometimes, you just need a player who is going to get you six to eight quick points after checking in. Sometimes, you need a guy who is a threat to pull-up and shoot from any spot on the court when given the space. All of the time, you need players who can find easier looks for your best players. Embiid shouldn't be trying to sledgehammer through post defenders and double teams every possession and should be getting several easy dunks and layups per game when teams have to cheat toward a driver.

The Sixers' offense is often static because they have a set of players that aren't capable of doing much other than being static. If Embiid or Simmons was capable of being a bonafide No. 1 option for a contending team, it would be a different story. But neither are currently ready for that responsibility, and they need more players who can help carry the load on offense so their defensive gifts can shine through.

(I lean toward this side if we're keeping score at home.)

The Sixers need a shooter

To believe a shooter is the fix to Philadelphia's problems, you must believe the top-end of the Sixers' roster is equipped to shoulder the load. Perhaps you are one of the people left with that rosy outlook on things, and if you are, I envy your ability to block outside noise.

The theory goes something like this — put another shooter, a feared shooter into this rotation and watch how this thing goes. Bring in somebody like Davis Bertans, who is shooting over 42 percent from three on more than eight attempts per game, and watch how defenses have to defend Philadelphia's best players differently. All of a sudden, it's harder to double-team Joel Embiid in the post, to play zone for long stretches, to clog the lane against Ben Simmons.

It's hard to underestimate how much of a difference it would make to have even one elite shooter on the Sixers. They constantly generate wide-open threes on a given night, but unfortunately, those shots are going to guys who rarely capitalize on the opportunity. Assessing how that impacts the offense is fairly straightforward.

When you consider that Furkan Korkmaz is now a no-doubt rotation player for Philly, it's easy to see how a shooter who can hit off movement would benefit the team. The Sixers have had to actively discourage players from that style of shooting to simplify the game for them, most notably in the case of Matisse Thybulle, who has seen his percentage climb since his shot selection was altered. Wouldn't it be nice if they could dust off the old JJ Redick plays for someone?

There's also a case to be made that poor shooting bleeds into their defense. Think of it this way — Embiid deals with constant double teams designed to force the ball out of his hands, and watches as the guys who get the subsequent shot opportunities lay brick after brick from beyond. When those misses come every so often, you shrug your shoulders and move on. But over time, it's only natural to feel discouraged when your teammates don't cash in, and unrest on offense eventually carries over to defense.

On paper, it might be easier to find a guy who shoots well vs. a guy who with off-the-bounce juice. There may be some warts with those guys — shooting specialists don't have to be defensive liabilities, but the ones who are available at the trade deadline often are — but the Sixers should be able to live with those, given how good the defense is and how dire the offense can be.

Philadelphia already has trouble distributing touches and finding a place for everyone to have the ball in their hands on offense. Adding someone who can give them a shot in the arm without needing to dominate the ball would be a good thing.

The Sixers need both

But good luck finding that player with what they have to trade.