With just a few days left before the NBA trade deadline, it's looking more and more like changes must be made 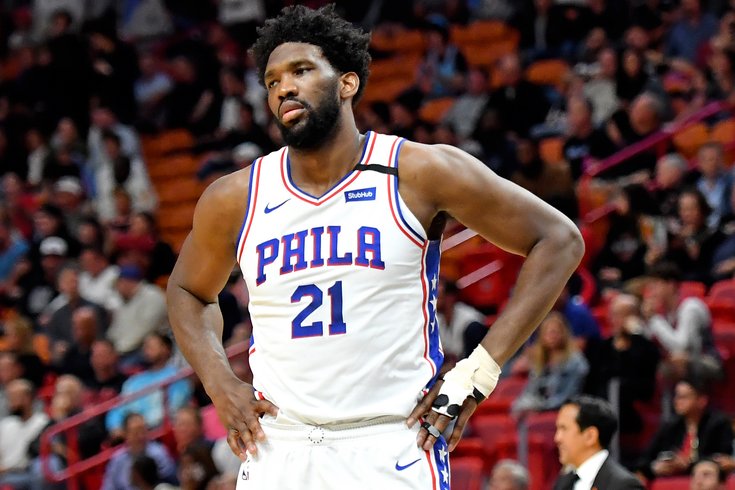 Center Joel Embiid reacts during the Sixers' blowout loss to the Heat on Monday night.

The Sixers got absolutely smoked by the Heat on Super Bowl Monday, 137-106. They do not deserve a more imaginative lede than that.

• In the middle of a brutal stretch for the team, there has been a development that looms large for their viability in the playoffs. Ben Simmons has made it a point to seek contact and get to the free-throw line, and he's actually cashing in while he's there, a departure from the days where teams felt comfortable hacking him to death.

If Simmons is not going to make teams respect him as an outside shooter, it is an absolute necessity for him to take advantage of his physical gifts and get to the line. He is quick enough to burn bigger players and strong enough to overpower smaller players, and over the last month, he has finally started to weaponize that fact.

Foul generation is one of the most underrated parts of every elite player's game. It's a path to cutting into leads without the clock moving, a way to potentially put the opponent's best players on the bench, and something that should be in his arsenal 82 games a year. Took him long enough to figure this out.

• The Sixers got Joel Embiid involved early, and to the surprise of absolutely no one who follows this team, that kept the big man engaged and willing to put in work on the defensive end.

If they had played better, I would spend more time beating this point into the ground, but they don't deserve to have their virtues extolled tonight. Even writing this much for "The Good" was a stretch and they didn't deserve it.

Al Horford has been the guy who has drawn the ire of the fanbase more often this season, perhaps because you can see a version of the Sixers that still makes sense conceptually with Harris on it. But if anything, it's a bigger deal that Harris hasn't been better as an outside threat, because the team construction sort of hinges on the fact that he can be/is a high-level shooter. That was where he appeared to be headed when he left the Clippers, fresh off a season-and-a-half stretch where he was burning the nets down from deep.

But since arriving in Philly, Harris has been pedestrian from deep. If there is a reason they have struggled against zone looks this season, look at his personal issues in those circumstances — a lot of possessions end with the ball in his hands and space to shoot, only for Harris to badly miss the attempt they worked hard for.

He doesn't get judged to the degree that Embiid and Simmons do, and that's fair to a point, but they simply need him to be better in order for this project to work. Occasional outbursts and periodic hot stretches aren't going to cut it. He must be a high-level offensive player, a three-level scorer, and the nights where he is are few and far between.

• There is a scene in the Netflix show, I Think You Should Leave, where Tim Robinson essentially parodies the game show Press Your Luck, turning the face of the "Whammy" into a full-blown mascot. The bit is basically that the mascot, Chunky, doesn't actually know what to do when he is called into action.

At one point, Chunky tries to steal and break a contestant's laptop, much to the chagrin of the host, and is screamed at to figure out what he's supposed to accomplish when he makes an appearance on the show. "You had all summer," Robinson laments to Chunky in a moment of disbelief.

In unrelated news, Al Horford had another terrible game in Miami on Monday night.

• Brett Brown may not be the guy who assembled this demented horror show of a roster, but he's also not doing anything to pull it out of the muck it is stuck in right now. There are possessions where three different guys are trying to post up, clear mismatches missed in service of some half-baked effort on the other side of the floor by a role player whose heart is in the right place but whose skills aren't up to par.

What is this play supposed to be?

There are only so many decisions and changes a coach can make, particularly one whose job security hinges on the outcome of this season. But Brown, at times during the offseason and throughout this year, has insisted he doesn't want to coach out of fear. Fear is the only thing that could explain continuing to try to get the Embiid/Horford frontcourt to work. Horford has flat-out sucked playing next to their franchise center, and while it may not win him any love from the new guy, Brown isn't paid to make everyone happy, he's supposed to do what's best for the team.

When the Sixers just put normal lineups/combinations of players between Embiid and Simmons, they look pretty good. I don't understand why this is so hard for the coach and general manager to grasp. What would be worse is if they grasp it and are too proud or stubborn to pivot out of it. Horford is plenty good enough to help the team, but never in his life has he been good enough to justify this demented science experiment they are going through to try to get this to work.

The deadline strategy is very simple to me: acquire guards, or at least play the ones you have. This nonsense sure ain't working.

• I can tell you one area where Ben Simmons wasn't a positive on Monday night — the defensive end of the floor. In the midst of an All-Defense caliber year, Simmons had a stinker against Miami's Jimmy Butler, who he had played excellent defense against all year before this game. But Butler went on a first-half rampage against the Sixers, dropping 23 (of his game-high 38) on his former team, and Simmons wasn't doing much to stop the bleeding.

The Heat do their best to force switches Butler can attack, and they did that plenty on Monday night by trying to get him isolated on Furkan Korkmaz and Shake Milton, who are drawing dead against him. But Simmons was uncharacteristically bad guarding Butler, struggling to keep him away from the rim and looking absolutely disinterested in committing at times.

This is what I get for praising him for his effort against the Celtics — there was none on defense against Miami.

• It is honestly impressive that Mike Scott has been with the Sixers for a full year now and still has absolutely no idea where he is supposed to be half of the time. The Sixers will execute a switch, and he somehow ends the sequence guarding nobody and standing on the opposite side of the floor of his man. It is only after Embiid or Horford plays air traffic controller that he finds where he's supposed to be. They rarely hedge against pick-and-rolls, but he does constantly, and I truthfully can't be sure if he's doing what he's told to do or if he is just playing a game in his own mind that no one else on the team is participating in.

Scott did keep them in the game (relatively, anyway) with his shooting in the third quarter, so I don't pin this loss on him, but if this was his last game in a Sixers uniform, I won't miss watching him play defense.

• There are people who probably still cling to the idea of this being a "flip the switch" team. I am more inclined to believe that there should be major deals on the table between now and Thursday. Perhaps the Sixers will build a team that makes sense this time.

This group has told you through its results on the road, through its effort night-to-night, through the discombobulated offense that they are not good enough. Window dressing isn't going to get it done. An eighth man probably isn't going to alter their fortunes. Homecourt in the first round looks like an impossibility at this point. They may not be that far behind their competition in the East from a pure numbers perspective, but they stand out from those teams in that they consistently fail to deliver a professional effort half of the time.

It ain't good enough, point blank period. And I can tell you right now, if the Sixers believe standing pat is going to inspire any hope in the fanbase, they have another thing coming. It is one thing to lose, and it is another to get manhandled.

• Embiid was not anywhere close to the top of the list of problems on Monday night. But after he took a whack to his hand in the third quarter and was grasping his surgically-repaired hand in pain, and after it was clear this game was out of reach in the fourth quarter, his ass should have been parked on the bench for the rest of the game. By that point, it was not within reach, and protecting the health of their franchise player is a much bigger priority than trying to cut a 20+ point lead to like, 13.

We can constantly point to these moments where Embiid is thrown back into action despite basic wisdom and logic suggesting they should protect him. They committed $100+ million on a player who is supposed to protect him, but somehow haven't come up with the spine to stand up to him when it's necessary.

• That Jimmy Butler guy is pretty good. Wonder where you might get one of those.