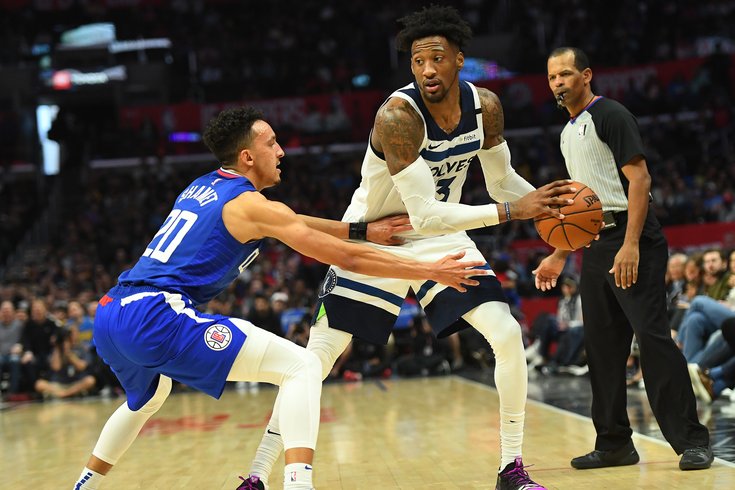 If only the Sixers had a shooter like Landry Shamet or Robert Covington. Well, they could have the chance to get one of them back at the trade deadline.

Believe it or not, but the NBA Trade Deadline is coming up in just a few days. After last week was (rightfully) devoted to remembering the life of Kobe Bryant, it may feel like the deadline is sneaking up quickly this year, but the hours from now until 3 p.m. on Thursday will likely be filled with plenty of rumors and, no doubt, a few Woj Bombs.

Just how active the Sixers will be remains to be seen, as they find themselves in a tricky situation. Set on winning, there's likely not one move out there that will land them everything they're looking for — at least not without them blowing up the current roster they've built over the last year plus, one that already looks vastly different from the roster Elton Brand inherited when he took over before last season.

Because of that, the belief is that the Sixers will try to pull off some smaller moves this time around. Here's more from our own Kyle Neubeck:

Elton Brand has not tinkered with the roster so much as he has taken a blowtorch to it, leaving little in place except for the pillars of Joel Embiid and Ben Simmons. So it's hard to know what the team will do in the next week or so leading into the 2020 deadline.

Team sources insist the Sixers are focused on smaller, realistic moves, with shooting and ballhandling at the top of every wish list. Neutral parties say some of the biggest trade rumors they've been part of to date are pure fiction, invented by agents looking to get their clients to high-profile markets or teams trying to create markets for players they're no longer in need of.

But Brand has often kept his biggest moves close to the vest, so you take those claims with a grain of salt no matter where they're coming from. This time of year, it's important to remember that everyone is incentivized to lie, and it's one of the few instances where you could consider it a virtue.

In other words, take everything that you're about to read with a giant grain of salt, and don't believe anything until it's been verified. Now that the disclaimer is out of the way, let's start looking at some rumors, shall we?

Let's start with Adrian Wojnarowski, who broke down the upcoming deadline on the latest episode of The Woj Pod. Here's what he had to say about Philly:

Philly is trying to win a championship and they’re trying to figure out the right mix. They need more shooting. They lost in the last two years, having a roster that included JJ Redick and Landry Shamet. JJ leaves as a free agent, Landry was in the Tobias Harris trade, that’s certainly an element they would like to add to this team.  [h/t The Sixers Wire]

One name that has been linked to the Sixers throughout this lead up to the deadline has been Robert Covington. And it appears he continues to pop up in rumors surrounding his former team.

Ambitious as it sounds, Minnesota has sought two first-round picks in exchange for Robert Covington in advance of Thursday's trade deadline, league sources say. Let's see where the Wolves land if/when they actually deal him, with Philly and Houston at the front of the RoCo line

Let's just pretend that price tag isn't absolutely absurd for just one second. Unfortunately for Philly, Covington hasn't been that great shooting from the outside this season (just under 35%). That being said, he is a prototypical three-and-D guy and his defensive abilities would cause matchup nightmares on a second unit that already includes Ben Simmons and Matisse Thybulle. He also already knows the system and several of the guys on the team, which would make his transition quite smooth. That being said ... two firsts is going to be a hard pass from me (and should be the same from Brand.

Of course, Covington is hardly the only shooter available to the Sixers. But if they want someone with an even greater skillset, they're likely going to have to part ways with one of their bigger-name players. Could Al Horford, who has been struggling this year after signing a four-year, $109 million deal this past offseason, be the guy to go? He makes sense given his high salary compared to what he's contributing on the court, but there's a reason the Sixers brought him in, and that's likely the same reason they'd be hesitant to part with him in a trade.

Here's more from Woj on his podcast:

I think the hard part for them, and they’ve acknowledged it, how do they stack together contracts and picks to bring back an established player? You look at their roster and you go OK, they don’t want to trade Al Horford. They brought Al Horford in there because they wanted his size. They’re trying to beat Milwaukee. They want to beat the Bucks to win the East and they need size to do that and they need Al Horford to do that.  [h/t The Sixers Wire]

The Sixers are currently in sixth place in the Eastern Conference, 11.5 games behind the first-place Bucks, but just three games behind the Celtics and Heat, who they play on Monday night, for the third spot in the East. There's a chance for the Sixers to quickly more up the standings and get closer to where they thought they would be before the season began.

But in order to do so, they'll need to avoid losses like the one they suffered in Boston on Saturday night. And that may require some changes before Thursday's trade deadline.

We'll keep you covered with the latest news and rumors from around the NBA right here in our live deadline tracker: