How the Sixers handle the trade deadline internally 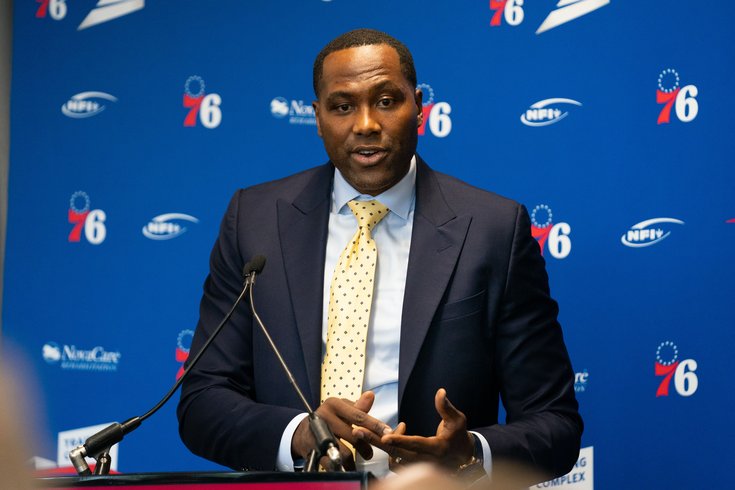 Navigating the trade deadline has to be one of the most underrated human exercises in sports. Players are floated in constant rumors, some because of their worth as players and some simply because they have cleared a specific salary threshold, but they're expected to keep plugging away and winning games, ignoring that their lives could change with one phone call.

The Sixers, relative to other teams around the league, have been hyperactive on the trade market in the last couple of years. Not many teams swing one trade as big as the Jimmy Butler trade in a year, but the Sixers pulled off two last season and then executed a sign-and-trade of Butler on the opening night of free agency. They dumped Markelle Fultz to Orlando to open cap flexibility and pick up an asset, trading a former No. 1 overall pick they'd invested heavily in to open up future options.

Elton Brand has not tinkered with the roster so much as he has taken a blowtorch to it, leaving little in place except for the pillars of Joel Embiid and Ben Simmons. So it's hard to know what the team will do in the next week or so leading into the 2020 deadline.

Team sources insist the Sixers are focused on smaller, realistic moves, with shooting and ballhandling at the top of every wish list. Neutral parties say some of the biggest trade rumors they've been part of to date are pure fiction, invented by agents looking to get their clients to high-profile markets or teams trying to create markets for players they're no longer in need of.

But Brand has often kept his biggest moves close to the vest, so you take those claims with a grain of salt no matter where they're coming from. This time of year, it's important to remember that everyone is incentivized to lie, and it's one of the few instances where you could consider it a virtue.

Even if they try to minimize the attention paid to outside noise, it is a time period of constant communication for the Sixers. Brand and head coach Brett Brown speak twice-a-day, seven days a week, with Brown recently estimating that 10 out of every 14 times is face-to-face interaction.

That does not necessarily mean in person. Apple's FaceTime is a gamechanger for NBA teams, not just you and your long-distance relationship. Regardless of the method, it is an important element in a relationship that is central to Philadelphia's deadline planning.

"I think the world of him. The club should sign him to a 50-year contract, he's just incredible to me," Brown said before a recent win vs. the Chicago Bulls. "The fact that I coached him and then I coached against him, and now he's my general manager, we talk all of the time and it's a very easy conversation and a truthful one. Day-to-day stuff, trade deadline, it's all part of it. It's just a relationship that I personally value very much."

Those two men have very different roles this time of year. Brand's effort to build a relationship with players and communicate more openly has been noticed by the likes of Joel Embiid, who has consistently painted him in a favorable light in comparison to former GM Bryan Colangelo, but Brand still has to take cold, calculated looks at the roster at all times.

As a first-time GM last season, there was a feeling-out period for Brand and the organization. Which tasks should he delegate, which people do you trust, where do you need to put your foot down? All questions Brand had to figure out on the fly. There is less of that this season, allowing Brand more time for things like scouting trips as the year wears on.

Brown, on the other hand, has games to win right now, and a group of players that he must connect with as long as they are here. Philadelphia has four road games between now and the deadline — at Atlanta, Boston, Miami, and finally Milwaukee on the day of the deadline. Outside of Atlanta, that is a brutal stretch of games, and it is possible there are Sixers players who have suited up for their last home game in Philadelphia.

It puts Brown in an interesting position. Can you withhold information from your players about the noise in the marketplace and still have them trust you? Brown doesn't really try to, seeing it as his responsibility to maintain the level of trust with his guys while keeping some level of distance from the front office.

"I feel a responsibility to keep the boys in the boat always. I've gone through a bunch of trade deadlines in my times doing this, and it's somewhere striking a balance of being candid, being transparent and honest with them, and things I choose not to know," Brown said Wednesday afternoon. "Elton's got the keys to the car, and there's stuff I choose not to know about, like let me just go coach the team. That's really the relationship right now I have with the front office, where I trust their judgment, I trust their ability to navigate like, what's the best team look like?"

"Elton and I talk all the time about what I think we need as a coach and what I'm feeling, and he shares his thoughts as well. But the day-to-day stuff, communicating with the players, I'll do as much as I can and try to be just aware of the landscape you're referring to and share information as I see it."

The Sixers have one of the trickiest deadlines to navigate of any team in the league. Can they upgrade an odd-fitting roster without many movable pieces to speak of? Is there a player available who lifts the pieces already in place without adding an additional weakness to the rotation? Or is the solution simpler than that — can they convince themselves that this project will come good organically, with health and time together the only things holding them back?

In just over a week, we will have our answers. Then all of us, whether we're observing from the outside or controlling things from the inside, will attempt to answer a new set of questions down the stretch.