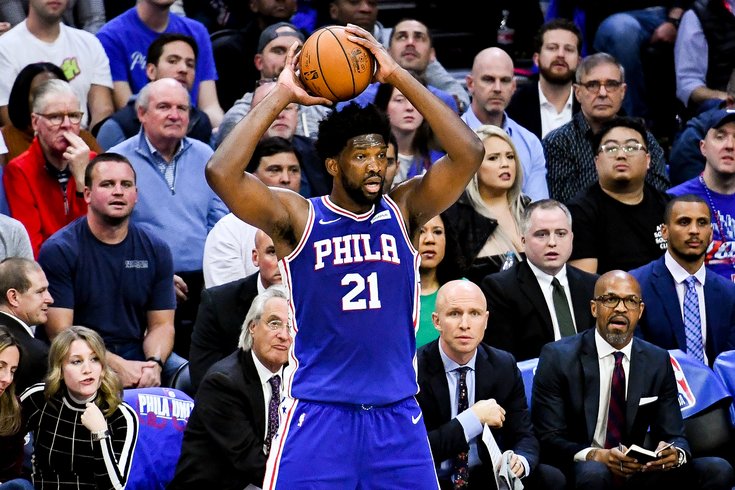 Joel Embiid will make his return to the floor against the Golden State Warriors after being cleared to play by a specialist on Tuesday evening. His return to play comes two-and-a-half weeks following surgery to repair a torn radial collateral ligament in the fourth metacarpal of his left hand.

He is expected to have to wear a wrap/cast on the hand in order to play. A team representative told PhillyVoice they will be thoughtful in how Embiid is used during his first game back, but there won't necessarily be a hard "restriction" for his minutes after the layoff.

Embiid first suffered the injury in Philadelphia's win over Oklahoma City on January 6th, making two separate trips to the locker room twice before eventually finishing out the game. He admitted to reporters the night of the sixth that prior to the ugly dislocation that circulated on social media, he had felt something go wrong in his hand and was cleared for a return anyway.

"I think it happened a couple of plays earlier, I felt my finger snapping and I thought I fractured it. I went in the locker room, they did some X-rays and they said it was nothing," Embiid said, "I came back...and then it just happened. It was just unfortunate," Embiid told reporters. "It was pretty bad, I was basically playing with one hand."

He underwent surgery four days later on Friday, January 10th, and was cleared for non-contact conditioning drills in under a week. After practicing for the first time last Friday, Embiid admitted that a usual return from this injury is about a month, so a return at any point this week would be considered ahead of schedule.

Before Tuesday night's game, Sixers head coach Brett Brown discussed the team's use of Ben Simmons with Embiid on the shelf, with Philadelphia playing through him more as a screener and a distributor from the elbow, rather than as a traditional point guard. The big man's return would seem to complicate that, but Brown stressed that Embiid's ability to space the floor should aid in continuing to get the most out of Simmons, and that the elevation of other Sixers rotation players should continue to allow Simmons to thrive.

"It's easier for me to [use Simmons as a screener] when I have more people who can run a pick-and-roll. I think with Shake [Milton] and Furkan [Korkmaz] and [Josh Richardson], it's part of the reason Shake has been elevated, how can I do this more and put Ben in this environment we're speaking of," Brown said. "I think because Joel can shoot, I have choices all over the place...the fact that he can stretch the floor like Al Horford makes it not as much of a head-scratcher. I think also you can do some different things with ducking him in."

Embiid, who told Rachel Nichols on The Jump on Saturday he would take more jumpers and do what it takes to help Simmons out as best as he can, is coming back to a situation where Simmons has been space-eating and attacking the rim with the floor spread around him, regardless of the style of play it took to get there. There will be a close eye on how they balance the need for Embiid post touches with Simmons' recent uptick in form and vice versa.

Going in, the head coach is optimistic it shouldn't be too much of a problem, and Brown says he doesn't want the offense to be a static series of post-ups anyway.

"If we look back as I remember it, when he had his most success is when Joel moves, when he is spaced," Brown said Tuesday. "It's not like, fire down, fire down, dump it into Jo and everybody stand and watch, that's not how he wants to play all of the time either. When it gets into the playoffs, I'll do it from time-to-time but it's not really the way I want to play all of the time either...it'll be a hybrid of this stuff with movement, and posting Jo, and playing with Ben.

"It's evolving, and we're all learning. I think that there is certainly enough time to get our offensive semblance right because I really do love our defense."

Tuesday's game is expected to feature numerous tributes to Philadelphia native Kobe Bryant, who tragically passed away along with eight others in a helicopter crash on Sunday. Embiid has called Bryant one of his primary inspirations as a basketball player in the past, confessing in a 2018 article that the first game he ever watched was a clash between Bryant's Lakers and the Orlando Magic in the 2009 NBA Finals.