Practice notes: Sixers use death of Kobe Bryant as inspiration to come together 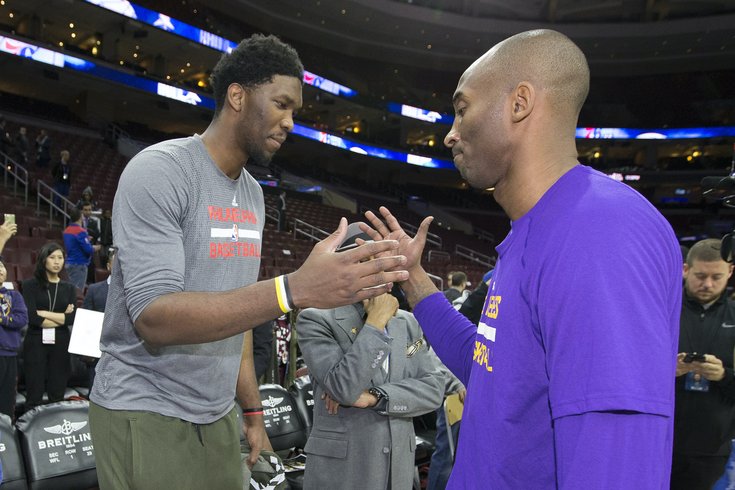 How does one respond to death? It is one of the eternal questions of humanity, the inspiration for faith-based philosophies, but it is not a question we find ourselves particularly able to answer. When someone dies in the manner Kobe Bryant did, tragically and unexpectedly, we find ourselves with less to say and more to figure out.

The Sixers were fortunate — as fortunate as anyone could be in this situation, anyway — to have the day off on Sunday, afforded the time and space to gather themselves. The consensus that emerged at the practice facility on Monday was gratitude for the group they have in Philadelphia and the power of being able to share stories of their connection to a departed legend.

"We were very quiet, very sad here, and we all got to reflect on him and his life," Al Horford told reporters on Monday. "Coach Brown put a lot of things into perspective for us. I was happy in a way just to get with the guys and get us all together in one room. The NBA family is bigger, it extends, it's not only just the players, it's the coaches, it's [the media], a lot of people that cover this every day, we feel it. That's a real thing."

"I'm just glad I was able to have some support just by being with the guys, that definitely made me feel better."

One-by-one, the Sixers gathered before practice and each told their stories of Bryant's influence on their lives. He was not the only player to embrace the global nature of the game, but he was a pivotal figure in the NBA's outreach to places like China where the game thrives today. That fact is reflected in Philadelphia's international roster, with players from Turkey, Cameroon, Brazil, Australia, and the Dominican Republic all gathering Monday to explain the part he played in their journeys.

It was simpler than that for Tobias Harris, who viewed Bryant as his hero. The stories of Bryant waking up to work out at 6 a.m. inspired Harris in his youth, and Harris was one of a fortunate group of players to attend a mini-camp hosted by Bryant in Thousand Oaks, California last summer, which he called, "a dream come true" and a "once-in-a-lifetime" experience.

Returning to the place where he believed Bryant would have been most comfortable during turmoil, Harris said getting out on the floor Monday helped to relieve some of the anguish he felt over losing a hero.

"I think about the hours he put into his craft, his work ethic, those things inspired me as a player growing up. I tried to model my work ethic after a guy like Kobe," Harris said. "Basketball has always been a peaceful place for me, even getting out there and practicing, it was kind of relaxing to get out there and compete. I believe it was probably the exact same way for Kobe when he played, just to be able to go out there and be around his teammates and use that competitive fire for whatever else is going on."

Most of Philadelphia's players did not have the privilege of going up against Bryant during his prime. Three of Philadelphia's rostered players weren't born yet when Bryant made his NBA debut in 1996, their memories driven by what they saw him do on television and the stories they heard circulate about him over the years.

His impact was felt by those players anyway. Joel Embiid did not speak to reporters Monday, but he has repeatedly cited Bryant as an inspiration for his career. In a piece for The Player's Tribune two years ago, he recalled the first NBA game he ever watched, a 2009 Finals game pitting Bryant's Lakers against the Orlando Magic. And when LeBron James left the Sixers standing at the altar in free agency that summer, Embiid let King James know what he thought of the decision by weaponizing Kobe against him.

The Lakers are FOREVER gonna be Kobe’s and Magic’s team.... Process that

The head coach, of course, has a different perspective. Assistants on Gregg Popovich's staffs have roles distributed to them by the head honcho, each coach taking responsibility for different elements of the game and different advanced scout reports. The Lakers were one of the teams Brett Brown was responsible for, so Bryant's game tape became as familiar to him as it would have been to any coach in the league.

Successful though that Spurs run was, the Lakers gave them fits throughout Bryant's career. And to Brown, there was no mystery about why that was. From the six-minute mark of the third quarter onward, Bryant was going to take the reins of the game and win or lose on his terms. The only decision to make was whether to live with Bryant and Bryant alone scoring or trying to force anyone else on L.A. to beat them.

"You had to get through the Lakers to do anything," Brown said. "He just tormented you with, how did you guard him? I would see because I had to zoom in, you would see if you didn't know the time and the score, and you just saw his mood, you could tell it was like six minutes into the third period, and he's just going to grab the game. He'd come out and be Mr. Unselfish and a facilitator and kumbaya and all that, and then all of a sudden, the game's on the line, or the game's starting to take a shape one way or the other, and he would just grab games."

"It points all back to that amazing mental toughness, that amazing laser, assassin-like, I'm going to go win this game. I'm not here to make friends, I'm here to win games. He really acted and played like that."

In one form or another, Bryant has touched pieces of Brown's life. His son, Sam, is a freshman at Lower Merion High School, playing for the same head coach (Gregg Downer) that Bryant did when he won a state title in 1996. During Bryant's farewell tour in 2015-16, in the midst of the Sixers' horrific 10-win season, Bryant sat with the head coach in his office for 45 minutes, discussing basketball and their connections to the city of Philadelphia, but also the other pursuits in his life — a passion for animation, a desire to improve children's literacy, his quest to be the best father he could be to his daughters.

These are the stories that continue to pop up in the hours and days following Bryant's passing. Bryant was a thorn in the side of the Sixers for years, a heel who always relished tearing them up, but the franchise recognizes they have a special relationship and obligation to him that many around the league do not.

On Tuesday night, they will have an opportunity to show everyone what that means and what he meant to the Philadelphia basketball community. The show will go on, and it seems Bryant probably would have wanted it that way.

FROM THE ARCHIVES: Remembering a different Kobe Bryant

• A brief non-Kobe tangent related to Tuesday's game: Joel Embiid has been upgraded to questionable in advance of Tuesday's game against the Warriors, his return to play inching closer. The final hurdle he has to clear is a visit with a hand specialist on Tuesday, who will have to give him the go-ahead in order for Embiid to suit up.

The timing of Embiid's visit with the hand specialist is unclear as of this time, and the decision could come down as late as the hour or two before Tuesday's tip-off. Philadelphia hardly needs the big fella to beat a sputtering Warriors team, but if he's ready to go physically and they can reintegrate him into what they have going on, the sooner the better.