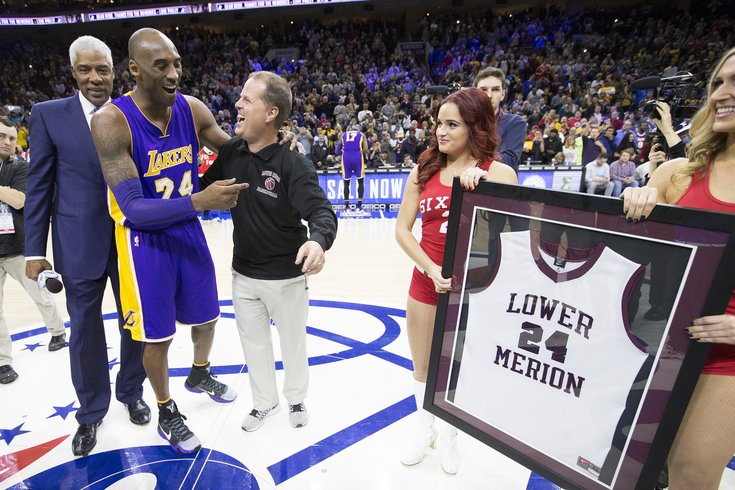 This story was originally published on December 1, 2015.

When Kobe Bryant retires after this year, he’ll have only played for two teams in his life. One is the Los Angeles Lakers, who visit the Philadelphia 76ers on Tuesday. The other is Lower Merion High School, where the gym bears his name and where his greatness was forged.

Flip it, turn it upside down, and look at him any way you want — Bryant is, was and will forever be a Philly basketball player.

There was always a cockiness about Bryant, though back then it was sometimes wrapped in a jovial, approachable package. He had a self-deprecating sense of humor. He was not guarded and could laugh at himself around his teammates. He was able to be silly on team bus rides, confident enough to make the kind of goofy facial expressions teenage stars can get away with before the real world gets a hold of them and chastises their every move. He could be public with his emotions and say what he really thought.

There was no one to question this precocious prodigy deemed the best high school athlete in the world.

Kobe’s personal, gold-plated armor seemed much thicker then. However, the bullets and shrapnel still hurled at him today from some corners come much denser and larger than they did in the mid-1990s.

Bryant, the future hall of famer and the NBA’s third all-time leading scorer, was able to laugh at almost anything, from junk defenses designed to stop him, to the few clods in the media who doubted the 6-foot-6, 190-pound spaghetti strand could make the successful jump to the NBA.

Does anyone doubt him now?

The funny thing is, the 17-year-old kid who stood in the packed, creaky Lower Merion gym that day in late April 1996 knew, even on the brink of manhood, how great he would be. And then, he announced to the world his intention of skipping “college and take my talent to the NBA.”

Stranger still is that Bryant knew this before he even stepped foot on a basketball court his senior year of high school. Some of his best games have gone unseen by the public eye, because Bryant came up during a different time — a time before the instant world of camcorders and iPhones, around the advent of the internet.

Those games — the ones that proved to Bryant he could play and succeed in NBA —  arrived almost a year before he would make his decision, in the summer of 1995. Bryant spent the final summer of his youth tearing up NBA players like Jerry Stackhouse and Jeff Malone, both of whom were members of the 76ers at the time, during pick up games in the Saint Joseph’s Fieldhouse.

They tried keeping up with “the kid,” and couldn’t.

Soon, friendly games began to take on a different tone; Bryant was embarrassing pro athletes. More so, it was because the punk with the sideways smirk was denting egos he wasn’t supposed to. And it didn’t take long for Bryant to be viewed in a whole new light. He stood up to attempts at being backed down. He manned-up when out in the open floor against the pros. Still the same — the kid was hanging.

Bryant answered a lot of questions about himself that summer — there was just one lingering, nagging doubt that he needed to address: Could he win?

An important chunk of his legacy hadn’t yet been written. Recognized as the nation’s best high school player, with whirlwinds of speculation buzzing around him, Bryant hadn’t "won" anything yet. He was noncommittal as to what direction he was headed after the season, but he was singularly focused when it came to his immediate future; he wanted a Pennsylvania state championship.

“All this stuff I’m getting is nice,” said Bryant at the time about the swirling attention. “But what I really want is to win. Being seen as the best player in the country is great. I work hard on my game and one day I’d like to be considered the best player in the world. But I can’t even think about that without first winning something here at Lower Merion. I still live with that [District 1 championship] game. It still bothers me. If I’m supposed to be the best, then the best player has to win.

“That’s what people forget about me. The scholarship offers and this talk about me one day making the big step and playing in the NBA is all nice and everything, but I haven’t even won at the high school level yet. If I can’t win at this level, how am I going to win at a higher level, whether it’s college or the NBA? I have to win something here first. That’s the only thing that’s driving me now.”

The nightmare Kobe was dealing with was the 77-50 thrashing his Lower Merion team took his junior year against defending state champion Chester on March 3, 1995, in the PIAA District 1 Class AAAA championship at Villanova.

Bryant was suffocated everywhere he went on the floor, forced up many bad shots and for one of the few times in his spectacular career — high school or pro — looked indecisive on a basketball court.

A year later, the wise guy with the sideways smile exacted his revenge.

“I had to get that, I had to get Chester back and show that we are the best in the state,” said Bryant, after leading the Aces to a 60-53 victory over Chester in the District 1 championship at Villanova in his senior year.

“Hey,” the high school phenom said to the boy, as the two walked ahead in what was a living Norman Rockwell portrait. “You don’t have to be afraid of me.”

Merion finished 31-3 that season and went on to capture the elusive state title. Highlights of Bryant in the state championship game were shown on all of the local Philadelphia TV stations, something that doesn’t happen even today despite the growth of high school sports.

Kobe ended his career as Southeastern Pennsylvania’s all-time leading scorer with 2,883 points, surpassing legends Wilt Chamberlain and Lionel Simmons along the way. But one of the more lasting images of the high school Bryant came after the District 1 semifinal victory over Rip Hamilton and Coatesville at the Palestra.

With the second semifinal game about to begin, Bryant took a brief respite walking around the halls of the storied hoops venue like a sort of pied piper, with a circle of followers around him that would have made any NBA star envious. It included a group of high school girls and women in their 20s, grown men looking to take a picture with him and a plethora of autograph seekers.

One fan hoping for an autograph and walking on the periphery of the crowd was a young boy about six or seven-years-old, holding a legal pad the size of his tiny torso. When the boy finally fell into Kobe’s vision, Bryant stopped the group like a strutting marching band leader and turned to the boy.

“Hey buddy,” Bryant looked down and said. “You want me to sign that for you?”

The boy, too nervous to respond, anxiously shook his head “yes.”

Bryant reached down and grabbed the legal pad and pen from the boy’s shaking hands and asked him his name. Kobe proceeded to walk with the boy, signing the pad while motioning a stop sign to the masses that had since gathered behind him. It was just Kobe and the kid.

“Hey,” the high school phenom said to the boy, as the two walked ahead in what was a living Norman Rockwell portrait. “You don’t have to be afraid of me.”

And Kobe reached over with his right hand and gave the kid a little pat on his right shoulder as they continued walking away together … a future superstar and a boy, now a grown man himself, with the memory of a lifetime.