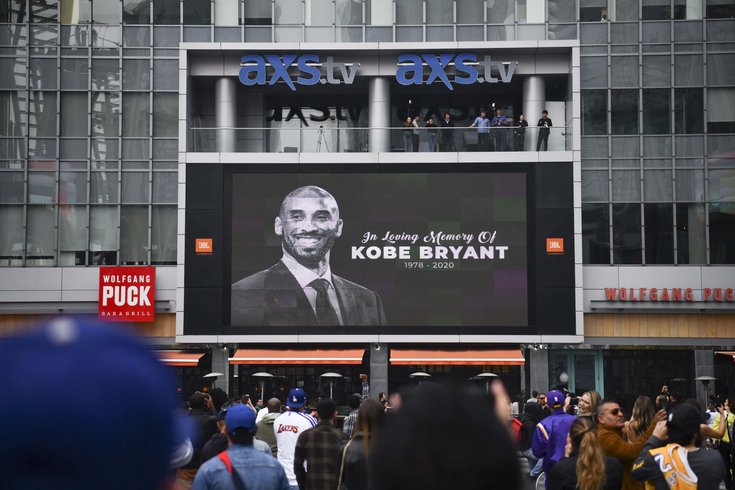 Fans mourn the loss of NBA legend Kobe Bryant outside of the Staples Center in Los Angeles on Sunday, Jan. 26, 2020. Bryant, a Lower Merion native, was one of nine people killed in a helicopter crash in Calabasas, California.

Kobe Bryant's final moments were spent in a helicopter over Calabasas, California, with eight other people, including the helicopter's pilot (or pilots). The full scope of Sunday's tragedy has unfolded over the past few hours, with few details confirmed from the budding investigation.

Kathy Sonnad, a 10-year-resident who lives just blocks from the crash, spoke with PhillyVoice a few hours after the incident.

She had left her house around 9:40 a.m., Pacific time, to walk her dog, she said. The weather was cool and foggy, and Sonnad called it a "dreary morning." Here is her account of what happened:

"I was approaching my street and I heard this really loud helicopter. We do have lots of helicopters that go back and forth from Santa Barbara, a lot of people have private helicopters here, we hear them but this was unusual. It was so incredibly loud, it sounded like it was as low as a rooftop. It was coming from the west going east — a typical route. I heard a very loud sound but I didn't see much because of the dense fog. It went right over head and then five seconds later I hear no engines, nothing. There was just nothing. Absolutely nothing still.

I started walking and I was two houses further and then I heard this really loud boom and then nothing, very quiet. I was a few houses away and I said to my son that something just happened on the other side of the street. We went running out like other people and by this time there were sirens and other helicopters over head. There was a lot of smoke."

Sonnad, an educational therapist, said the crash caused a small brush fire to break out, but thanks to the cool foggy weather, it didn't spread. Also firefighters were there very quickly, she said.

The chilling details of what happened were worth repeating, as Sonnad mentioned for a second time that it could have simply been engine failure.

"The sound stopped, there was nothing," Sonnad recalled. "It went from being really low and close to just nothing, and 10 seconds later boom."

The investigation into the crash that killed Bryant is ongoing and the exact cause had not yet been determined Sunday evening. The Federal Aviation Administration's investigators are on the scene.

During a press conference Sunday evening, Los Angeles officials confirmed nine people were on the helicopter and there were no survivors from the crash. At the time, officials would not confirm the identities of any of the people, pending the identification of the passengers and the notifications of next of kin. Officials also would not confirm the owner of the helicopter at the time.

Sonnad found out, like everyone else, that it was NBA legend Kobe Bryant aboard the chopper later on television. And though she isn't the biggest basketball fan, she has a chilling personal connection to the future Hall of Famer.

"I work at private school and one of them is where his children attend so I know when I go back on Tuesday we will be, yeah, I don't know what's going to happen it's just awful," Sonnad said. "It's touching me in that way too that I need to help council the students who know them really well."

Like everyone else, Sonnad and her neighbors are dealing with the tragedy of what happened Sunday.

"It's not something you expect when you wake up and you walk your dog," she said. "It's very sad and alarming and just tragic."

Sonnad will be giving statements to the police and NTSB in the coming days.