The NBA legend and Lower Merion native, along with his daughter Gianna, were among nine people killed Sunday 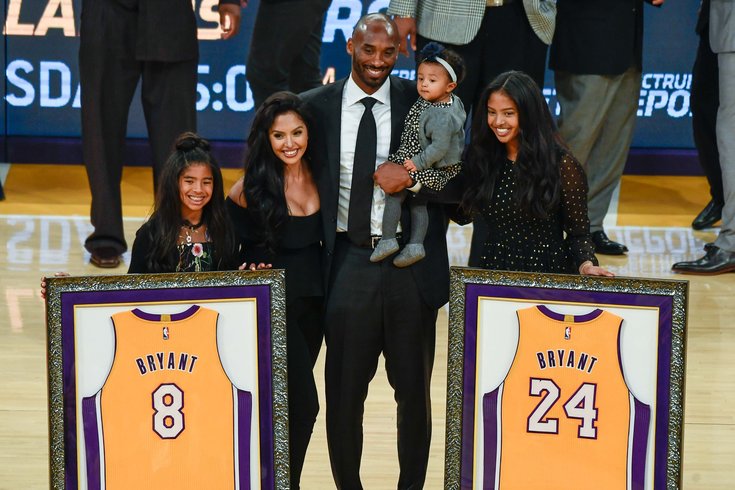 Kobe Bryant is pictured with his daughter Gianna Bryant, left, during the halftime ceremony to retire Kobe Bryant's two uniform numbers at the Staples Center in Los Angeles in December 2017. Kobe and Gianna Bryant were among nine people who died in a helicopter crash in California on Jan. 26, 2020. Standing next to Bryant here is his wife Vanessa Bryant, immediate left, and Natalia Bryant, right. Bryant is holding Bianka Bryant. This photo was take prior to the birth of the Bryants' youngest daughter Capri.

There were nine people on board the helicopter, including Bryant's second oldest daughter, Gianna Bryant, 13. Emergency responders were called to the scene just before 9:50 a.m. PST – 12:50 p.m. locally. There were no survivors.

TMZ broke the story that Bryant had been on the helicopter early Sunday afternoon, and the news was confirmed by ESPN's Adrian Wojnarowski minutes later.

Kobe Bryant is among those dead in a helicopter crash outside Los Angeles, a source confirms to ESPN.

TMZ had pictures of the crash on its website within minutes of it posting, with social media outcries hoping the report is false following at a fevered pitch.

From the TMZ report:

Kobe Bryant died in a helicoper crash in Calabasas Sunday morning TMZ Sports has confirmed.
Kobe was traveling with at least 3 other people in his private helicopter when it went down. A fire broke out. Emergency personnel responded, but nobody on board survived.

Five people are confirmed dead. We're told Vanessa Bryant was not among those on board. The cause of the crash is under investigation.

Kobe has famously used a helicopter to travel for years — dating back to when he played for the Lakers. He was known for commuting from Newport Beach, CA to the STAPLES Center in DTLA in his Sikorsky S-76 chopper.  [TMZ]

With tragic tributes streaming in, Bryant's death comes as an absolute shock. Los Angeles County officials said Sunday afternoon that nine people died in the helicopter crash that ignited a brush fire in the hills of Calabasas, California that burned about one-quarter of an acre.

Bryant is among the greatest NBA players ever, and was surpassed Saturday night by LeBron James for third on the all-time scoring list. Bryant tweeted congratulations to James after the game, about 16 hours ago.

Bryant is also well known to locals, hailing from Lower Merion where he played his high school basketball before being drafted in 1996 straight out of the Main Line.

On Sunday afternoon, officials with the Lower Merion School District, where Bryant attended high school, expressed sorrow about the passing of "one our most illustrious alumni." 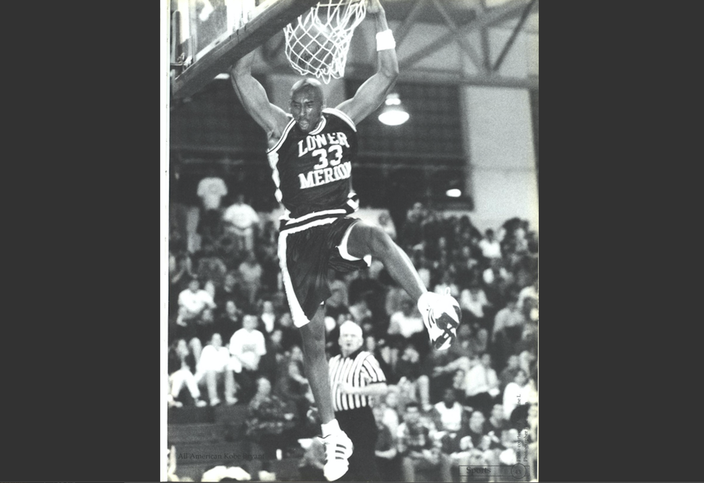 Kobe Bryant, a star basketball player at Lower Merion High School who went directly to the NBA where he was an all-time great of the Los Angeles Lakers, died in a helicopter crash in Calabasas, California, on Jan 26, 2020. He is show above, in an undated photo, playing for the Lower Merion Aces.

"Mr. Bryant's connection to Lower Merion High School, where he played basketball prior to joining the NBA, has raised the profile of the high school and our district throughout the world," a statement from school officials said.

Bryant was a star of the basketball team from 1992 to 1996. Coached by Gregg Downer, Bryant lead the team to the Pennsylvania state championship in 1996. Since going to the NBA, Bryant has been a benefactor to the school, and the Lower Merion High School gym, where the boys' and girls' basketball team play, is named the Kobe Bryant Gymnasium.

In the school district's statement, Downer he is shocked and devastated by this news adding, "Aces Nation has lost its heartbeat."

Lower Merion's basketball teams will pay tribute to Bryant as this season continues, adding "at this time, as a district, we will concentrate on supporting those in our community – including Coach Downer and English teacher Jeanne Mastriano– whom Mr. Bryant credited for sparking his love of writing."