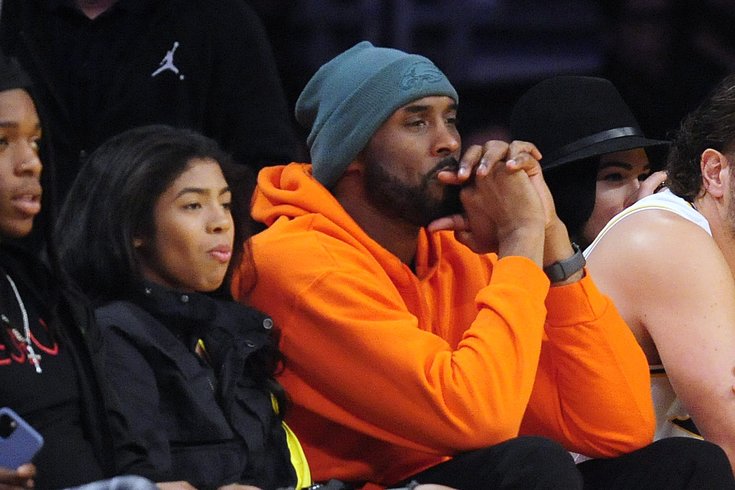 Former Los Angeles Lakers player Kobe Bryant seated with his daughter Natalia attend the Lakers game against the Dallas Mavericks in Los Angeles on Dec. 29, 2019. Bryant died in a helicopter crash in Calabasas, California, on Jan. 26, 2020.

Kobe Bryant's shocking death in a helicopter crash in Calabasas, California, rocked the sports world Sunday. TMZ Sports first reported the helicopter crash. Los Angeles County officials said nine people died in the crash, but they have not yet confirmed the victims' identities.

Bryant, 41, who was a star player at Lower Merion High School before being drafted directly into the NBA, was traveling in his private helicopter when it went down and a fire broke out.

Emergency personnel were called to the crash scene, but there were no survivors. Los Angeles County officials said nine people died in the crash. It was later confirmed that Bryant and his 13-year-old daughter Gianna were among the victims.

The cause of the accident is under investigation.

Fans, celebrities and athletes across all sports took to social media on Sunday to share their shock about the news and pay tribute to "The Black Mamba."

I’ve always wanted to be like you. Not only as a player but also as a person. You represent everything that is great about sports. #RIPKobe

Rest In Peace Kobe Bryant - a sad day for all of sports - Kobe was a pioneer and legendary ambassador for the game of basketball . Thoughts and prayers go out to Kobe’s family . https://t.co/kn03JPIjzb

Man I don’t even know where to start😭😭 I started playing ball because of KOBE after watching the 2010 finals. I had never watched ball before that and that finals was the turning point of my life. I WANTED TO BE LIKE KOBE. I’m so FREAKING SAD right now!!!!

Jeannine & I are absolutely shocked to hear of the loss of one of my favorite people & one of the best basketball minds in the history of the game! Our hearts & prayers to Vanessa & his girls. @kobebryant you were my biggest fan, but I was yours #RIPMAMBA @NBA @espn @SLAMonline pic.twitter.com/Ll0BD6VWgr

This is not real right now

Hurting Today! Praying for the Family, Friends, and Fans of the Great @kobebryant
God Bless!!!

Watching the news reports & my heart is so torn like many of the fans that r devastated over the news of the tragedy involving @kobebryant HEARTBREAKING !

Rip @kobebryant 😔 doesn’t feel real.... my heart goes out to his family and loved ones 🦋 pic.twitter.com/0qQeBtsz6U

Beyond devastated... my big brother... I can’t, I just can’t believe it

My heart and prayers go out to the Bryant family and the passengers’ families on this sad day.

The impact Kobe had on the world cannot be expressed in words. RIP to a legend and a friend... 🙏🏼

This news is killing me today... My childhood hero gone too soon. Better believe I got him!! RIP MAMBA #EpicSh*t pic.twitter.com/DNFAMD18N4

Most people will remember Kobe as the magnificent athlete who inspired a whole generation of basketball players. But I will always remember him as a man who was much more than an athlete. pic.twitter.com/9EZuwk8wrV

There’s no words to express the pain Im going through with this tragedy of loosing my neice Gigi & my brother @kobebryant I love u and u will be missed. My condolences goes out to the Bryant family and the families of the other passengers on board. IM SICK RIGHT NOW pic.twitter.com/pigHywq3c1

Kobe was so much more than an athlete, he was a family man. That was what we had most in common. I would hug his children like they were my own and he would embrace my kids like they were his. His baby girl Gigi was born on the same day as my youngest daughter Me’Arah. pic.twitter.com/BHBPN5Wq8V

Sadly absorbing the tragic news about my teammates loss of his Son and granddaughter. Joe and Pam I humbly offer my condolences. Vanessa so sorry for your loss and pray you remain strong and focused on you and Kobe’s dreams for your family. Here Always for you...

Saddened by the loss of Icon @KobeBryant and his daughter Gigi. Prayers to his wife Vanessa and to each of the families affected. RIP Black Mamba!!! pic.twitter.com/V7ym1Cn0LW

As I try to write this post, my mind is racing. I’m in disbelief and have been crying all morning over this devastating news that Kobe and his young daughter, Gigi have passed away in a helicopter crash. Cookie and I are heartbroken. pic.twitter.com/X2vF0M0a1u

He was such an icon but also did so much for LA. He was passionate about serving the homeless and was an advocate for women's basketball. Coaching his daughter’s basketball team brought him so much happiness.

I love him, his family and what he stood for on the court and off the court.

My friend, a legend, husband, father, son, brother, Oscar winner and greatest Laker of all-time is gone. It’s hard to accept. Kobe was a leader of our game, a mentor to both male and female players. pic.twitter.com/NXsrXmCkkG

He gave his knowledge, time, and talent to tutor so many at the youth level, collegiate level, & NBA & WNBA players. Words can’t express the impact that he had on the game of basketball. I know basketball fans all over the world will miss him, especially the City of Los Angeles. pic.twitter.com/ZoB3Uwbvzk

Kobe and I shared so many special conversations about life and basketball. We had so much in common off the court. I used to love talking to him about Lakers basketball, being fathers and husbands and how much we loved Italy. I will miss those conversations and him so much. pic.twitter.com/PIv7obzr2x

Laker Nation, the game of basketball & our city, will never be the same without Kobe. Cookie & I are praying for Vanessa, his beautiful daughters Natalia, Bianka & Capri, as well as his parents Joe & Pam & his sisters. We will always be here for the Bryant family. pic.twitter.com/WWxmtEAJqZ

My heart hurts for Kobe and his family. Life aint fair man. This cant be

(1/5) The Philadelphia 76ers organization mourns the losses of NBA icon Kobe Bryant, his daughter, Gianna, and all of those who passed away tragically today in an accident in California.

Bryant, one of the most decorated players in NBA history and a global ambassador...

(2/5) for the game, made an everlasting mark on our league. His determination, passion to win and fierce competitiveness fueled the Los Angeles Lakers to five NBA championships and inspired millions of people around the world.

Bryant’s journey to icon status in the world...

(3/5) of basketball included deep ties to the Philadelphia region, where he starred at Lower Merion High School from 1992-96. As he honed his craft in Philadelphia, Bryant established a reputation as a player with once-in-a-lifetime poise, grit, heart and an unwavering love...

While his imprint on the game of basketball will be etched in the history books forever, Bryant will also be remembered for his love of his family, commitment to community through his philanthropic work, and for being an innovative leader in business.

There will never be another like you
R.I.P Kobe #MambaMentality pic.twitter.com/Akdv0TBnnt

He has been & will continue to be a blessing to so many around the world, by the legacy he has left behind! RIP Kobe... The Black Mamba!! #RIPKobe #RIPMAMBA #RIPGIGI 🙏🏾 pic.twitter.com/bXuqxlobLs

MY FAVORITE ATHLETE EVER MAN..MY INSPIRATION!!!
I AM SICK RIGHT NOW!!! I CANT EVEN EXPRESS IT...SO HEARTBROKEN 😭 😭😭😭😭😭😭 pic.twitter.com/U637drXTjl

A legend is gone too soon. RIP Kobe. #mamba

The impact you had on many lives can never be measured. RIP Black Mamba🐍24/8. Prayers for your family and the families of the others who lost their lives as well. pic.twitter.com/QI8WYke6a5

Kobe was a legend on the court and just getting started in what would have been just as meaningful a second act. To lose Gianna is even more heartbreaking to us as parents. Michelle and I send love and prayers to Vanessa and the entire Bryant family on an unthinkable day.

From your love of your hometown of Philly to your competitiveness in everything to your legendary career to your Mamba Mentality to the speech you gave our team to how you were the definition of a true leader & man... RIP to a Legend, @kobebryant. 🐍 #MambaForever

Drove to Lower Merion. This shit is so surreal man I wish someone would tell me this isn’t really happening.

Fans have gathered outside of Lower Merion High School, where Kobe Bryant played high school basketball to honor his memory on this devastating day. pic.twitter.com/pR8jIJGCfT

The scene at Lower Merion. pic.twitter.com/X04gBLaD3n

This one hurts. I was actually at Lower Merion High School (coaching my son's team) at Kobe Bryant Gym when the news broke so it really hit home. There are people you don't know personally, but they impact you and your better off with them being here. RIP (this one is tough).

Kobe Bryant was my HERO growing up. Even to this day he was an inspiration to the way I approached things. I woke up every day and saw this quote every time I opened my phone. His mentality motivated me not only in hard times but throughout my whole life. RIP, Kobe. pic.twitter.com/VtoYenQaYt

The game has lost a real champion. Our thoughts & prayers go out to the Bryant family & the families of those lost today. pic.twitter.com/LLLBMJCUUm

This is one of those days everyone will remember where they were when we lost a legend. Kobe an amazing basketball player but even better husband, father, friend, MENTOR. It doesn’t seem real. My thoughts and prayers go out to all the victims and families.

Charles Barkley honors Kobe, Gigi, and all the families and friends of those killed in Sunday’s crash. pic.twitter.com/hOSoIs3B1Z