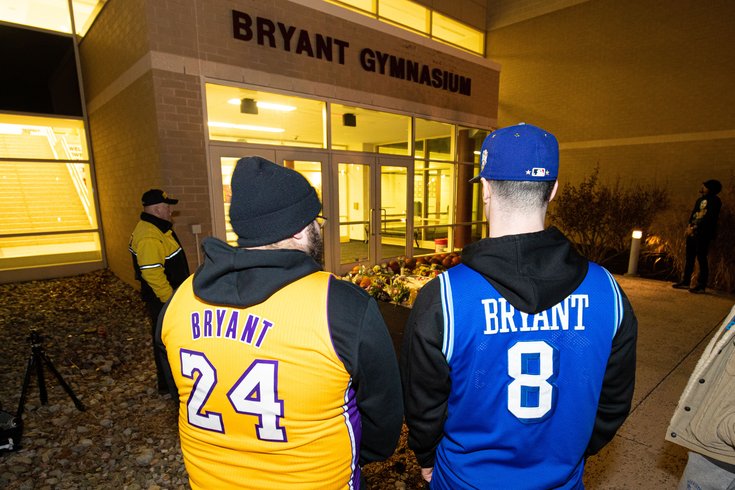 No athlete arrived at a more perfect time in history than Kobe Bryant.

As a torchbearer, he was preceded by Michael Jordan, the man whose moves he admitted to copying, a man who was fortunate to grow into stardom at a time when deeper examinations of our heroes were few and far between. He was followed by LeBron James, the man whose career effectively birthed the debate industrial complex that dominates modern sports TV, the man who has been a model citizen for over a decade and a half and still can’t please everyone.

In between, there was Bryant.

Kobe benefitted (as a player and a public figure) from possessing the same maniacal tendencies revered in Jordan, the heir to his throne in more ways than one. It is the thing that connects the two men all these years later, and it is the similarity that made people want to feel close to him. No one can doubt whether Bryant or Jordan got the most out of their respective talents. Bryant bloomed from a teenager who air-balled four shots in five minutes in his rookie playoff defeat to one of the biggest winners in the sport’s history. There is no greater proof of his love of basketball than his evolution over time, the high-flying teen transforming into a ruthless assassin from all over the floor.

But unlike Jordan, he lived and played through an era where the impact of those maniacal traits could be examined by the public day-to-day.  Stories from practice that would have been fodder for books a decade prior were caught on film instead. The contrast of his authoritarian style against someone like LeBron, who favors a more democratic (and often passive aggressive) approach, was fodder for debates about the ways in which we lead and the “best” paths to winning. We didn’t just hear stories of him clocking teammates with elbows, we were provided video footage of him cursing out his running mates, as if he believed he could will them into being great.

Starring alongside Shaquille O’Neal for the early 2000’s Lakers was both the greatest blessing of his career and the largest burden. Without O’Neal, Bryant likely never climbs to his place in the history books as one of the all-time greats. With him, though, Bryant’s greatest team accomplishments are often denigrated as a reflection of his good fortune rather than his own significant contributions to one of the most dominant runs in NBA history. Those contributions, it should be noted, include actually showing up ready to compete every year as O’Neal waddled into the season out of shape.

Setting aside the rings, the accolades, and the numbers, the greatest legacy he leaves behind is his lifelong fight to live on his terms. His singular drive allowed him to have a successful post-basketball career, breaking into the film industry and establishing a second life beyond the sport that gave him so much. It is also what led to some of his most puzzling moments on the court. L.A.’s 2006 Game 7 defeat in Phoenix remains one of the strangest games in recent NBA history, where Bryant shot just three times in the second half of a blowout and was accused of openly tanking the game by Charles Barkley. Even his final team triumph, the Lakers’ Game 7 win over the Celtics to close out the 2010 NBA Finals, featured a now infamous 6/24 shooting effort from Bryant, unwilling to let anyone else write the script.

There is a certain level of poignance to that. Many view Bryant as the last of a dying breed, the face of “no new friends” in spite of his under-discussed trade request in the mid-2000’s. But the manner in which he played is perhaps the least replicable part about him, in spite of the fact that Bryant himself ripped them from his idol.

The things that Bryant did well — the mid-post fadeaways, the countless shots with hands in his face, the isolated, one-man attack that ignored his teammates for stretches of games — are antithetical to how we think about basketball today. Bryant didn’t turn down good shots for great shots, he mastered his shots. Bryant didn’t abandon the midrange as the league fell out of love with the shot, and it wasn’t until his final season that his attempts skewed as heavily toward the three-point line as many may have wanted. He was uncompromising, and who could blame him for being that way when assessing the totality of his career? These beliefs in his approach were not blind, but a reflection of his work he put in to justify them.

Turning that unflinching belief into a marketing slogan like “Mamba mentality” is and was corny, as are many efforts by athletes to brand self-determination. That doesn’t make it any less powerful. You don’t have to be a basketball player to find inspiration in Bryant’s path. We would all like to believe we can carve out our lanes to the top without compromising our visions, and it was Bryant’s belief that his story might inspire others.

"When you make a choice and say, 'Come hell or high water, I am going to be this,' then you should not be surprised when you are that,” Bryant once said in a Showtime documentary, Muse. “It should not be something that is intoxicating or out of character because you have seen this moment for so long that...when that moment comes, of course it is here because it has been here the whole time, because it has been [in your mind] the whole time."

Lionizing Kobe Bryant without examining his 2003 sexual assault case is impossible. That the charges were dismissed should not wipe away the actions before or after that decision by a Colorado judge. The accuser’s identity was leaked to the press, photos of the victim were shopped and published in tabloids, Bryant’s lawyer openly and repeatedly used her name in court, and Bryant would eventually concede in a letter that the teenaged woman did not view the encounter as consensual. The self-centered mentality that drove him on the court followed him even in these circumstances. A police report following the alleged assault quoted Kobe accusing teammate O’Neal of paying hush money to women to cover up his own misdeeds, an accusation that contributed to their fractured relationship and which O’Neal would forcefully deny.

Collectively, there has been little effort to grapple with this over the years. Given the way he emerged as one of the champions of the WNBA in recent years, it seems obvious he benefitted from his lowest moment as a person coming over a decade before the MeToo movement changed how the public responds to allegations of sexual assault. But whether out of disbelief, disinterest, or a protection of access, the journalists who covered Bryant over his two-decade career have rendered this section of his life a small footnote. There has been no real price paid, save for an out-of-court settlement in the civil suit.

In most instances, the Colorado incident is viewed as just another hurdle for a man who used that period of scrutiny as a branding opportunity for his long-lasting nickname, Black Mamba.

“I hear everything the crowd is saying. I hear it. Kobe sucks! So, it's like this place where it was my refuge is now being bombarded with all kinds of things they would say,” Bryant said in Muse about the creation of his nickname in the wake of the trial. “I had to separate myself. It felt like there were so many things coming at once. It was just becoming very, very confusing. I had to organize things. So I created The Black Mamba.”

This is not to claim he was incapable of growth, or that his actions and the allegations should be the beginning and end of the story of Kobe. In other areas of Bryant’s life, he showed a willingness to own up to and correct mistakes from the past. After being fined $100,000 for directing a gay slur at an official during a game in 2011, Bryant worked with GLAAD to film PSAs and enhance his own understanding of LGBT issues. Two years later, Bryant took to Twitter to scold a fan for using the word “gay” as an insult, copping to his prior ignorance.

@onepercentofone @pookeo9 exactly! That wasn't cool and was ignorant on my part. I own it and learn from it and expect the same from others

Perhaps he would have been able to address all of this one day, had he been given the chance. Even with this baggage, it is hard to oversell the tragedy of what took place on Sunday afternoon. A family lost a father and a daughter as he was passing his greatest passion along to her, and as it appeared she returned that same fire back to him. Millions of people lost their hero, complicated though his story may be.