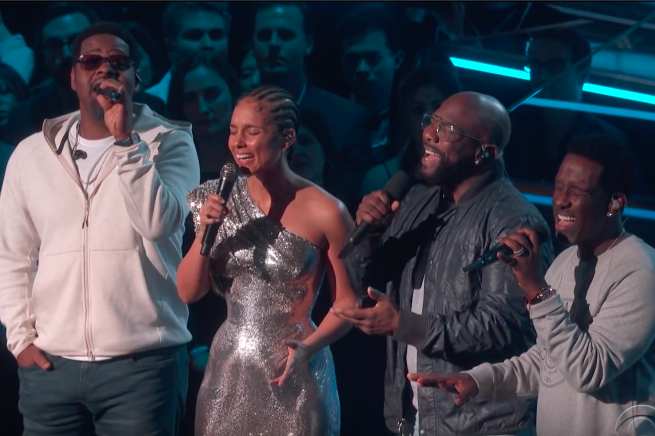 Kobe Bryant was honored by multiple artists during the 62nd Grammy Awards on Sunday, Jan. 26, 2020. Here, Alicia Keys and Philadelphia's Boyz II Men sing 'It's So Hard to Say Goodbye.' Bryant, his daughter Gianna, and seven other people were killed earlier Sunday in a helicopter crash.

Artists at the 62nd Grammy Awards at the Staples Center – the same arena where Kobe Bryant played most of his games for the Los Angeles Lakers – paid tribute to the Lower Merion-native killed in a helicopter crash, beginning with a performance of "It's So Hard to Say Goodbye" by Philly vocalists Boyz II Men and Alicia Keys.

Bryant, his 13-year-old daughter Gianna, and seven other passengers were killed in a helicopter crash in Calabasas, California earlier Sunday. Keys, the awards show's host, began by acknowledged the tragedy.

"Here we are together, on music's biggest night, celebrating the artists that do it best," Keys said. "But to be honest with you, we're all feeling crazy sadness right now. Because earlier today, Los Angeles, America, and the whole wide world lost a hero. And we're literally standing here, heartbroken, in the house that Kobe Bryant built.”

Keys began an a cappella rendition of the Boyz II Men hit “It’s So Hard to Say Goodbye”  before being joined onstage by the group to sing the ballad. Watch below:

By the end, a solemn Keys said, “We love you, Kobe.” The camera then zooms in on Bryant’s No. 8 and No. 24 jerseys illuminated from the rafters of the Staples Center.

Other tributes to Bryant during the Grammys included Run-DMC holding up his No. 24 jersey after performing "Walk This Way" with Aerosmith; a No. 24 jersey draped on a chair during Lil Nas X’s performance of "Old Town Road"; and Lizzo declaring "This night is for Kobe" before singing her hit single, "Cuz I Love You."

Lil Nas X won two Grammys for the "Old Town Road," including best music video and pop duo/group performance, and Lizzo won two for best traditional R&B performance for “Jerome” and best pop solo performance for “Truth Hurts.” Billie Eilish, was the big winner of the night with a total of five Grammys, including album of the year and best new artist.