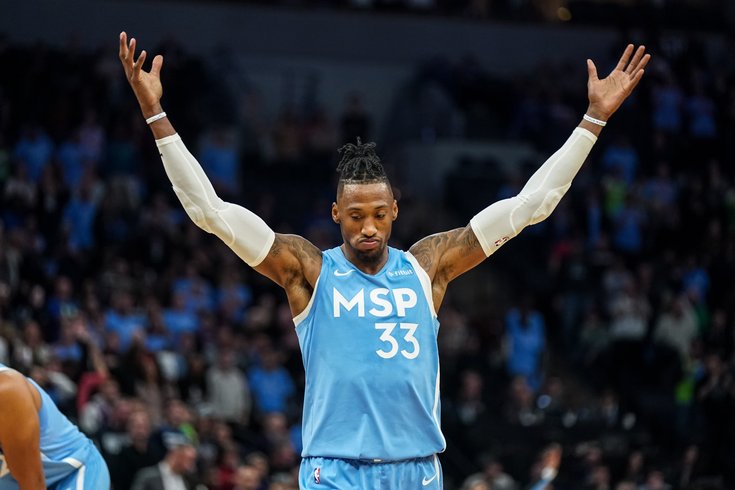 Is a Robert Covington reunion in the cards this winter?

The Sixers have reportedly expressed interest in acquiring Timberwolves forward Robert Covington before the trade deadline, according to a new report from Jon Krawcynski and Shams Charania of The Athletic.

In a story centered around Minnesota's pursuit of Warriors guard D'Angelo Russell, Charania and Krawcynski included this nugget of interest to Sixers fans:

Rival teams also say the market for forward Robert Covington has been heating up over recent days. Covington has become a coveted player, with his defensive prowess and outside shooting an ideal fit for most teams in the playoff hunt. Houston, Dallas and Philadelphia are among the teams who have expressed interest in Covington, but Minnesota is expected to drive a hard bargain, league sources said. [The Athletic]

Philadelphia fans, of course, are intimately familiar with Covington's set of skills and what he would bring to the table for Philly. Two prominent questions are all that really need to be discussed here — does Covington add the things the Sixers need from a potential deadline acquisition, and will they be able to come to an agreement on price? I am uncertain on the answers to both questions.

Defensively, Covington fits right in with the identity the Sixers have tried to build. Ben Simmons has emerged as Philadelphia's top perimeter defender, comfortable taking on a variety of assignments from 1-4, and when you consider Josh Richardson is now in the fold and Matisse Thybulle's proving his chops as a rookie, the Sixers could conceivably build a lineup with four high-level perimeter defenders and either Joel Embiid or Al Horford at center. That is a tantalizing prospect — especially when you consider that Covington's strengths as a team defender would be given a larger platform to shine now that Simmons is taking the top assignments every night.

It's the other end where Covington's flaws would have to be scrutinized further. He's basically the same guy as he has been for years on offense, a volume shooter with blinding highs and horrible lows from deep. His lack of a conscience is a good thing in the sense that it leaves him blind to pressure in big moments, but it can lead to some ugly performances from deep. His strength is also not shooting off movement, which is the skill that Philadelphia has lacked this year following JJ Redick's departure.

Covington is not going to give you anything as a self-creator, which means Philadelphia's issues with shot creation off of the bench would presumably not be fixed heading into the playoffs.

Viewed through the right lens, however, that might not matter as much as you'd think. Covington's limitations were a big issue for a Philadelphia team where he was asked to be one of their best players, but he would return to a team that needs him only to be an upgrade on the current bench players. His size allows him to play at basically any wing spot, so he could be an ultra-souped up version of Mike Scott, and Philadelphia would be able to send waves of tough defenders at opposing players.

Cost is a different story. Here's an important detail to remember with Covington — he's locked into a team-friendly deal for another two seasons after this one, which boosts his trade value by a good bit. The Wolves aren't in a position where they have to trade him, and it's possible they hold onto him for a deal where they can use him as part of a package to acquire a star, as the Sixers did when they shipped him off to Butler.

Personally, I think there's reason for optimism that the cost of acquiring Covington might be cheaper than you'd expect. He's the sort of player who is going to be hunted by good teams looking to make a leap to the next level, and those sorts of teams are not going to trade away major pieces (except for perhaps draft picks) to get their hands on someone like Covington.

Take a look at the other two teams in the rumor mill, Dallas and Houston. The Rockets are asset barren thanks to last summer's Russell Westbrook trade, and while the Mavericks are in a better position with depth pieces to trade, they also owe the Knicks their 2021 (unprotected) and 2023 (protected 1-10 through 2025) first-round picks from last year's Kristaps Porzingis trade. So while the Sixers aren't the asset-laden team they've been in the past, they might be competing against teams with their own hurdles and tough choices to make.

If the Sixers could sell the Timberwolves on some sort of draft-centric package — they have first-round picks to move, as well as some valuable early seconds from teams like the Knicks and Hawks — the contracts of Mike Scott and Zhaire Smith would be enough to get it done on pure salary terms. That doesn't feel like enough on the Wolves end, or those two wouldn't be floated in every Sixers rumor between now and February 6th, but at this juncture, I'm not sure what the Wolves are after in a potential Covington trade, or even if the Sixers would be comfortable putting so many eggs in the Covington basket.

Selfishly, it would be a great trade for me, because Covington tends to inspire a lot of emotion from different sections of the fanbase. I wouldn't bank on it happening, but who doesn't love a good reunion?