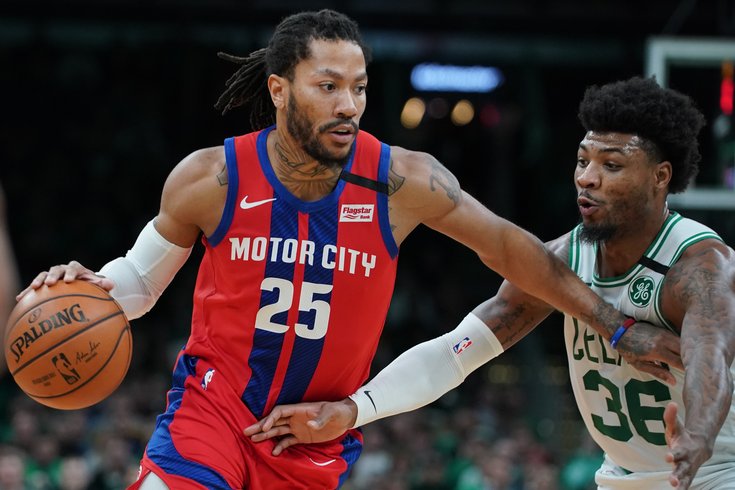 Derrick Rose and the Sixers — are they a fit?

The Sixers are reportedly interested in Pistons guard Derrick Rose, according to a new report from Yahoo's Chris Haynes.

Haynes' report says the Sixers are among a group of teams, including the Los Angeles Lakers, who have inquired about the former MVP:

The Los Angeles Lakers, Philadelphia 76ers and multiple teams with championship aspirations have expressed interest in trading for Detroit Pistons guard Derrick Rose, league sources told Yahoo Sports. The Clippers have checked in on Rose as well, but it was more of a common exploratory talk, sources said.

The Lakers and Sixers are in search of point guard assistance for the stretch run, sources said.

Rose, 31, is garnering considerable interest that wasn’t there when he was a free agent last summer. He has been the Pistons’ most consistent offensive weapon this season and his play has thrust him into consideration for the All-Star Game, which takes place in his hometown of Chicago next month. With the rash of injuries the Pistons have endured and Rose playing well, the veteran guard last week asked for an extended role with more minutes, sources said. [Yahoo]

As is custom around these parts, now we assess the two most important parts of any trade rumor — what does Derrick Rose bring to the table, and does the cost make sense for the Sixers?

Most fans are probably familiar with the version of Rose who took the league by storm a decade ago before an injury against the Sixers in the playoffs marked the beginning of a long and tortured health stretch for Rose. After a bounce-back year in Minnesota last season, Rose signed a two-year deal with the Detroit Pistons this past offseason, and he has delivered some of the best backup guard minutes in the league so far this year.

Rose is no longer the nuclear athlete he once was, which limits him from being the sort of attacker he was in the early Chicago years. But he has found new life in a bench scorer role, and he continues to make most of his money attacking the rim. Rose is one of the league leaders in drives per game — eighth in the league and immediately behind James Harden, per Second Spectrum tracking — and his efficiency (58.2 percent) is the second-best of any player in the league on those plays this season, trailing only DeMar DeRozan.

The Sixers, who have lacked punch off of the bench all year, could always use a guy that can get buckets and set the table for other players. And with Philadelphia figuring out that Ben Simmons might be best served by playing him alongside more ball-handlers, getting an attacker like Rose who can either set Simmons up or score himself could lift bench units. Rose's play over the last month has been one of the only things a depressing Pistons team can feel good about.

There are downsides to the fit, however. He still isn't much of a shooter despite one improved year from deep last season, which might limit his effectiveness alongside Joel Embiid. To get the most out of Rose in a sixth-man role, Philly would have to make some tweaks to the rotation to get him on the floor in the lineups that feature Simmons and Al Horford, rather than the slowed-down, halfcourt style the Sixers like to play around Embiid.

It's fair to ask whether restructuring the rotation for the sake of Rose is a worthwhile exercise. When everyone is healthy, do one of the bench wings deserve to lose minutes to get Rose out there sooner rather than later? And if you're not getting him on the floor to use him as an attacker in the Simmons-led bench groups, are you getting the sort of value out of him that you'd want to execute the trade in the first place? Haynes believes Rose wants a bigger role in Detroit, and it's hard to say whether the same would apply in Philly, where it looks highly unlikely it would be there for him.

That brings us to Rose's value. Scarcity might hurt teams looking to buy, as most teams with good bench/utility guards aren't trading them, which makes Rose a hotter commodity than perhaps he should be. You could make the argument either way about his contract — if he continues producing at the level he is right now, Rose at $7.5 million isn't too shabby. But he's a guy with an extensive injury history who doesn't offer much defensive toughness or versatility. If for some reason his health goes south, you're pretty stuck.

At a $7.3 million cap hit, there are several trade combinations the Sixers could make in order to bring him to Philly. Detroit's asking price is ultimately all that matters here. Beyond the necessary salary it would take to match, I personally wouldn't be willing to offer much more than second-round picks for a 31-year-old guard, even one producing as he has off of the bench this season.

(All of this, by the way, is without mentioning the off-court issues fans would have to grapple with in order to receive him as one of their own. Rose was one of the subjects of a high-profile lawsuit where he was accused of sexual assault in 2016, which led to him eventually being ruled not liable after he expressed his difficulty understanding the definition of "consent." While this ultimately has no impact on his trade value between NBA teams and I don't claim to have any additional insight as to his culpability in that affair, it was a significant part of his story in recent years, basketball aside.)

At the very least, between this and their rumored interest in Luke Kennard, the Sixers are spending plenty of time canvassing the Pistons for bench upgrades. This one strikes me as more realistic than Kennard, who is younger and makes more sense as part of a rebuild.