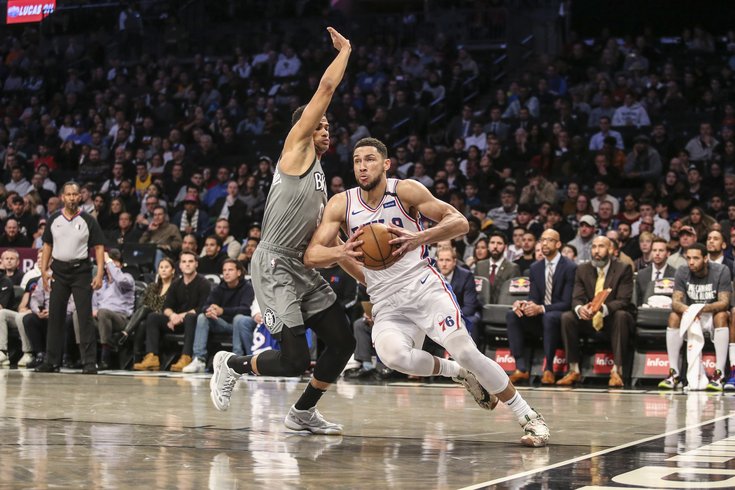 Ben Simmons had a career night in Brooklyn Monday.

The Sixers unleashed Ben Simmons on the Brooklyn Nets on Monday afternoon, and he was the catalyst for a big comeback victory, leading the Sixers to a big 117-111 win on the road.

Here's what I saw on Monday.

• I have been trying to tell and show people this for most of the season, but the way to get the most out of Ben Simmons is to unshackle him from norms and positional labels. Only using him as a point guard is a waste, and only using him as a forward sitting in the dunker's spot is a waste. He has far too much talent and far too many tools to try to stick him in one role and never revisit how he is used.

Here's something we haven't been able to say about Simmons much, if at all this season: he willed himself to the line throughout the first half, filling a void the Sixers have had since Joel Embiid hit the bench with a hand injury. I crush him all of the time for not taking advantage of his build and physical tools to get to the line, and he was much better in that regard on Monday afternoon.

Part of that change in attitude can be attributed to the personnel surrounding him and the role he was asked to play on offense. Brett Brown has been reluctant to use Simmons as a small-ball center this year — rightfully so after they paid Al Horford a boatload of money to spell Embiid — but with the options at backup center looking horrific on Monday afternoon, Simmons got the call in the second half, and the Sixers took off in a lineup that featured the likes of Raul Neto and Furkan Korkmaz running pick-and-rolls with Simmons as the screener.

With the space to operate in the middle and the pressure off of him to create everything himself, Simmons and the Sixers took off. Over and over again, Simmons got the ball with little left to do except attack the rim, and he was dominant, coming up with a 34-point triple-double in what was easily his best offensive performance of the season.

(A sidebar: the success of this group on Monday should underscore that any arguments over who is playing between Neto and Trey Burke are ultimately arguing about the wrong thing. In terms of his personal attacking, Neto was about as bad as he possibly could have been on Monday, and the Sixers surged anyway, with Neto chipping in just enough on defense to make up for his poor performance as a scorer. The sorts of players around Simmons, and the way they actually use him, are the key to unlocking Simmons. If you want to argue Burke over Neto is the key to that, I would counter that perhaps they should consider, actually investing in better versions of those players instead of paying $100-plus million on a backup for Embiid.)

With the offense running through him for long stretches of the game, Simmons kept up the same terrific energy on both ends of the floor, grabbing tough defensive rebounds, creating extra possessions when his teammates missed threes, and hounding people as a one-on-one defender, all but winning the Sixers the game by himself. That is apex Simmons, and it didn't take a whole lot more than just attempting to make the most of his gifts to get the best game of his career.

This game should be a giant, neon message to Elton Brand and Philadelphia's front office. The sort of players who help bring the best out of Simmons would also probably help out Embiid. This isn't rocket science.

• Matisse Thybulle had quite an adventure on offense on Monday afternoon. But that was one of the best defensive performances I think he has put up all season, with Thybulle making up for each and every offensive miscue with a second-effort on defense or a heroic play in transition.

There are few players in the league who are capable of having that loud of a game while only scoring three points. When he and Simmons are on the floor together at the same time, the Sixers are capable of some absolutely terrifying stretches on defense, where any bad pass is capable of being turned into a turnover and a runout the other way.

Games like these cause you to think that Thybulle might come for a starting spot with Philadelphia fully healthy as soon as this season. Horford may have gotten the big payday, but if you put the Simmons-Richardson-Thybulle-Harris quartet on the floor and jumping passing lanes with Embiid protecting the rim, you can theoretically lock down just about anyone.

• My official thoughts on that Al Horford performance:

For much of that game, Horford had the same defensive struggles that have plagued him during the bulk of his Philadelphia tenure. But when it was time for someone to stand up and be counted, Horford had a monster fourth quarter on both ends for the Sixers, showing off the offensive versatility that endeared him to observers all around the league.

Horford had it all working — the baseline jumper, the subtle fakes around the rim to get Jarrett Allen jumping, even a three-point make that they desperately needed in a one-possession game. And he came to life on the defensive end of the floor, where he looked at his best physically and mentally. Horford's timely help and ability to contest shots without fouling around the rim kept the Nets off of the board, and the Sixers needed that because they hit a cold stretch at an inopportune time late.

• Everyone give a nice welcome back to Mike Scott, who has returned from his exodus in the Siberian wilderness and is apparently capable of taking and making open threes again. He had his biggest moment as a Sixers player in Brooklyn last season, so perhaps he just needed to channel the energy of that moment for a day.

It went beyond the made shots. Scott fought hard on the offensive glass to create extra possessions for Philly, and that was especially important once the Sixers decided to go small in the second half. Good to see him spring to life.

• Outside of Simmons, nobody is having a better week than Korkmaz. He has found his footing and his confidence in Philadelphia's rotation, and while he is far down the list of heroes on Monday, his clutch three helped get the win in the final minutes. Confidence is an important part of basketball, or so I've heard.

• I think the idea behind showing/hedging more against Brooklyn pick-and-rolls is sound, and the Sixers executed that strategy to perfection against the Nets last week. But the Sixers didn't plan for one key change heading into this week's meeting with the Nets — ball-stopper Kyrie Irving was out of the lineup.

While Irving is content to try to dribble and shoot his way out of aggressive coverages, the rest of Brooklyn's guards are happy to move the ball when opponents hedge harder, and that creates open looks or four-on-three opportunities for the Nets on the back end. Game-planning around the other team's star player was the right call heading into the game, but the coverage didn't hold up against a group that doesn't play or see the same way as Irving does.

To their credit, the Sixers altered what they did in the second half, and it was a big part of getting this one turned around.

• Speaking of coverages, I have to keep harping about how the Sixers are using Horford defending pick-and-rolls. When they don't have him showing, which is most of the time, he is still way too far back for my liking. It doesn't seem like it accomplishes much of anything when the Sixers are dropping him as far back as they do Embiid.

He may theoretically be in a better position to contest at the rim, but he doesn't have the explosion or the length to take advantage of that from a near standstill. Those looks end with a lot of easy lobs to bigs or layups at the rim when Horford is too late on the contest. It seems counterintuitive, but Brown has to try to let Horford leverage his strength more and actually get up into guys, as he is still holding up pretty well on switches.

(That doesn't let Horford off of the hook, for what it's worth. He has been bad on his own plenty.)

• Brown really must not like Kyle O'Quinn. The Sixers have nearly exhausted the days left on Norvel Pelle's two-way deal, and with Pelle not available for Monday's afternoon affair, it seemed a lock for O'Quinn to play a bunch of minutes backing up Al Horford.

Instead, Brown initially went to O'Quinn and decided he had seen enough, choosing instead to play Jonah Bolden in a backup role. It went about as well as you could have expected considering how little Bolden has played this year and how erratic his play has been even when he has received minutes over the years. Within two minutes of checking into the game, Bolden had turned the ball over, picked up a loose ball foul, fouled a Nets player in the process of completing an and-one, and turned off any supporters he may have had left in the fanbase.

Bolden had four fouls in nine first-half minutes. That is hard to do. I can understand wanting to see what Bolden has before the Sixers potentially have to make roster decisions in the near future, but he is not really in a place where he's capable of contributing to winning basketball. Frankly, I'd rather see the Sixers try to play Simmons at center with several guards around him to see if they can just beat teams with speed, and that's exactly what ended up happening in the second half.

• Tobias Harris had three or four chances to give the Sixers needed breathing room down the stretch, and he clanged all of them off of the rim. One of his worst games in recent memory, and it came after a hot start from the outside.

• You should basically never give up offensive rebounds on missed free-throws. The Sixers gave up three in the first half alone, and the blood was on the hands of O'Quinn and Bolden, who were responsible for the failures on those plays. There are lulls during games I am personally willing to write off, but these are supposed to be easy.

• You obviously never want to see a guy take a spill like the one Nic Claxton took near the end of the third quarter, but it doesn't seem surprising that a guy who played completely out of control caused some awful mid-air collisions. It's one thing to play physical, he played like a guy with no understanding of where the line is.