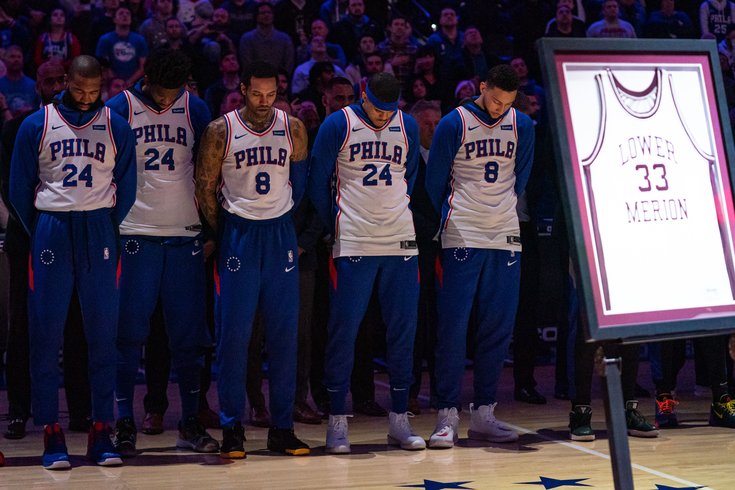 Members of the Philadelphia 76ers, wearing Nos. 8 and 24 to honor the late Kobe Bryant, stand alongside Bryant's high school uniform before facing the Golden State Warriors.

Before taking the court against the Golden State Warriors on Tuesday night, the Philadelphia 76ers presented a powerful tribute to the life and illustrious NBA career of Los Angles Lakers great Kobe Bryant.

Joel Embiid was approved to wear #24 tonight, in honor of Kobe Bryant. pic.twitter.com/OPcWsEBSU2

Zhaire Smith, who had been wearing No. 8 since entering the league last season, also came out sporting No. 7, which he'll continue to wear moving forward.

The tributes didn't stop once the game began either. Following the opening tip, the Sixers took an 8-second backcourt violation and the Warriors returned the favor by committing an intentional 24-second shot clock violation to mark Bryant's two jersey numbers with the Lakers.

Bryant, the 41-year-old superstar, husband and father of four, was among nine people, including his 13-year-old daughter, Gianna, who died Sunday morning in a tragic helicopter crash in southern California.

The accident sent shockwaves around the world, not just because of Bryant's global significance as an athlete, but because the ethos he taught transcended sports.

In Philadelphia, Bryant's death has come with added sorrow because of his family's local roots. His contribution to basketball was a product of the path built by his father, Joe Bryant, who starred at La Salle University and went on to play four seasons for the Sixers.

When Kobe Bryant led Lower Merion High School to a state title in 1996, it was clear that a special player would soon be representing Philadelphia on the way to five NBA championships, through the long shadow of controversy and in the philanthropic spirit he adopted in its wake.

Numerous landmarks around Philadelphia have been lit purple this week to honor Bryant. Billboards in his memory have also popped up on highways.

Around the NBA, players and teams have spent the past few days remembering, mourning and celebrating Bryant's life.

A scheduled Tuesday night game between the Los Angeles Lakers and Clippers was postponed in order to allow the Lakers organization to grieve Bryant's death.

Sixers fans were often on the receiving end of Bryant's daggers over the course of his career, most notably in the 2001 NBA Finals. By the time he made his last trip to Philadelphia as a Laker in late 2015, he received cheers and a standing ovation.

Scenes from the Wells Fargo Center on Tuesday night show that he will always hold a special place in Philadelphia's heart.

Still can’t, and don’t want to believe it, but I know you both are up above cherishing all the love. 🙏🏽💔🙏🏽 #Kobe #GiGi #RestInPeace pic.twitter.com/MhpZMwkykW