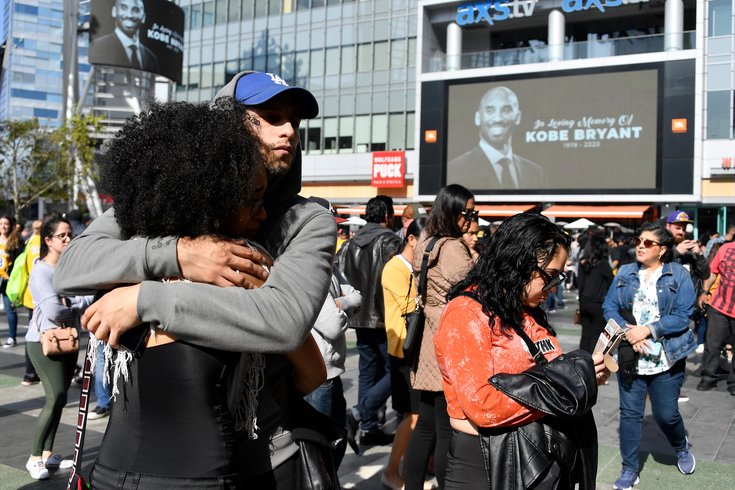 Devereau Chumrau, of Los Angeles, gets a hug while paying her respects for Kobe Bryant at a makeshift memorial across the street from Staples Center.

Sometimes it takes a loss of such magnitude — one that resonates with people from young to old of a true motivator who accomplished everything in their industry — to keep us all honest.

No matter how many walls we put up, how often we “play” another person online or in real life, there are few things like death, where no matter the social or celebrity status, we can all unify in remembrance. But herein also lies the inner contrast of coping with death, especially a tragic one. There is no book, no set of rules, no defined way on how to handle the loss of a loved one. We all manifest it in different ways, our own individual way.

There may not be another phenomenon like the contrast in how we deal with death. Social media has advanced this even more. The ability to memorialize someone through interactions with strangers, telling stories and posting videos, allows us to connect with each other over someone as large as the life lost on Sunday. Each story, each video, each moment touches the storyteller and listener in different ways, yet we remain connected. The tragic helicopter crash that took Kobe Bryant, his 13-year-old daughter, and seven other human beings is yet another reminder of it.

I’ve been on the air twice immediately following news of a major death. Most recently was just minutes after we got word about Roy Halladay. The one before that was when news came down about us getting Osama Bin-Laden. The only similarity between those two radio shows was the microphone in front of me and the full board of phone calls. I heard people cry, scream in anger, scream in joy, curse, and bring up loved ones. All in the context of a Phillies game or 9/11. Two extremes, I know, but think of the vast differences in how people coped with death, despite the vast difference in circumstance surrounding each one.

Kobe's death felt like that. Social media, radio, TV, columns — everything just stopped, and rightfully so.

There are few who have reached so many different people like Kobe Bryant. It’s just crazy to comprehend. Bryant’s death was felt the same by kids as it was by their grandparents. The world was put on pause and emotion poured out — from 13-70, from my fiancee’s eighth grade class to Cris Collinsworth’s DAD. Love, respect, admiration, and appreciation, all felt by multiple generations. That doesn’t come overnight.

It’s also something that, like Kobe's legacy, isn’t going anywhere.

I was 14 when Jerome Brown and his 12-year-old nephew died in a car accident. It hurt so bad as an Eagles fan to try and come to grips with one of your favorite stars no longer being there on Sunday afternoon. But that’s just it, the connection at that age was just with the player.

Things have changed as I’m now 41, the same age as Kobe was when the helicopter went down. Maybe it’s because we have "sports closure" – Kobe’s career ended, there were no more “what if’s?” like with Brown – or because of the similar age, but I can’t stop thinking about his daughter, Gianna. This young woman had the world in her hands, and the same mentality as her father to go out and snatch it. This column — like your twitter or Facebook account — is just a coping mechanism. However you cope with this loss, it’s your way. We all come to the same party, just happen to be wearing different gear. I just imagine somewhere on our clothing there’s a Mamba Sheath.

Make no mistake, we are all human beings under the many superficial layers we’ve built. Celebrities are not absolved from this, nobody is. Kobe was flawed, like everyone who walks this planet. We can have conversations with nuance about how complex of an individual Kobe was at times, how great of a father he was, as well as the rape allegations later settled in civil court. Neither define him entirely as a human being. Whether it’s a reminder of someone’s past or simply looking for retweets on Twitter, we’ve already seen both, maybe at the same time.

You can’t cancel Kobe’s past, but you can sure as hell continue to honor the positives he left. All the while – as a complex and flawed human being – understanding that nobody leaves this planet scoring 100% on the test.

That doesn’t mean you still can’t get an A.

What’s the weirdest habit you’ve seen performed by a co-worker? I’m going to guess that your VP of Sales or sous chef doesn't throw up before coming in to work. I asked my Lyft driver if he threw up before each shift (he doesn't) like George Kittle does right after warmups…of every game. That’s a lot of vomit.

This did, however, get me thinking about some of the weirder idiosyncratic things I’ve seen co-workers do.

When I was in Nashville, I produced a morning drive show and would get in early, like 4-4:30 a.m. The show started at 5:30 a.m., and I would chop it up with the overnight producer. He would shave with an electric razor and mirror at the board every morning. I was too new at the time to say anything, and after a month or so I stopped caring because he never got any hair on the board. That's the closest thing I could come up with.

Kittle blowing chunks before games was not something I expected to hear this week. I guess it’s better than Moises Alou urinating on his hands in lieu of batting gloves. I’d still rather shake Kittle’s hands over Alou. Can you even fist bump him?

Watch anything Kobe Bryant this week. Here are some suggestions:

Working on something here... Please respond or quote with your TOP moment to define Kobe Bryant. Can be a link, video, shot, box score. Put whatever you want that has a connection to him. Thank you