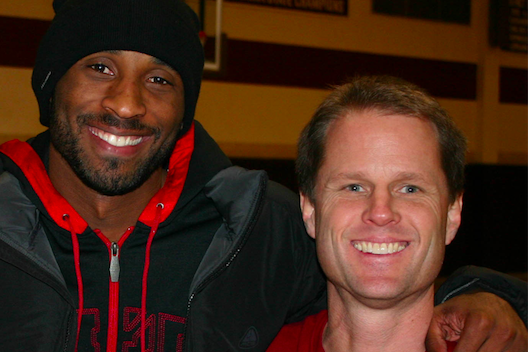 Kobe Bryant is pictured with Lower Merion High School basketball coach Gregg Downer. Bryant died at the age of 41 on Sunday in a southern California helicopter crash that also claimed the life of his 13-year-old daughter, Gianna, and seven others.

The Lower Merion High School community continues to honor the legacy of Kobe Bryant in the wake of the deadly helicopter crash the claimed the life of the distinguished alumnus.

Bryant, 41, led the 1996 Lower Merion team that won a state title under head coach Gregg Downer, a man Bryant credited with shaping his growth as a basketball player and person.

On Monday evening, Downer issued the following statement in memory of Bryant:

It is with complete shock and a broken heart that I mourn the passing of Kobe Bryant and his beautiful daughter, Gianna, and all the victims of this horrific tragedy.

My deepest condolences to the families involved, to Laker Nation, to Kobe’s fans around the world, and to our local Aces Nation.

It may seem odd for a grown man to admit it, but yesterday I lost my hero. Never have I witnessed such passion, work ethic, and intensity -- such a unique and purposeful drive for greatness. No excuses. No shortcuts. No days off. Kobe set the standard. He was our superman.

Kobe was a phenomenal athlete, a brilliant mind, and the fiercest competitor to walk the earth. And he was an even better father. The bond we shared in raising our young daughters was the source of my greatest pride in our relationship. When Kobe would take my daughter, Brynn, into his arms for hugs and high fives, our smiles were a mile wide -- the joy was incomparable. We had found something more important than basketball. We had discovered our purpose.

It is not often in life you see pure greatness. I was lucky enough to have a front row seat to it for four years. He pushed me as a coach to be better and I pushed him right back. It was a beautiful, winning combination for which I will forever be grateful. Our Aces motto is “hard work, dedication, results.” No one did it any better.

Moving forward seems nearly impossible, but I wonder if Kobe would tell us to “bounce the ball, squeak the sneakers and compete.”

We will continue to seek your inspiration daily and honor your legacy with our current and future Aces. We will never let your Aces Nation down.

I love you, Kobe Bean Bryant. Thank you for all you have done for me, for Lower Merion Basketball and for the world.

Long after Bryant went on to NBA stardom and five championships over his 20-year-career, he remained philanthropically engaged with his alma mater. The school has honored Bryant with a memorial as the community continues to grieve and celebrate his life.

An investigation into the circumstances of Sunday's helicopter crash, which also took the life of Bryant's 13-year-old daughter and seven others, remains ongoing.

Our hearts are broken. 🖤♠️ pic.twitter.com/K7bN7WABnA