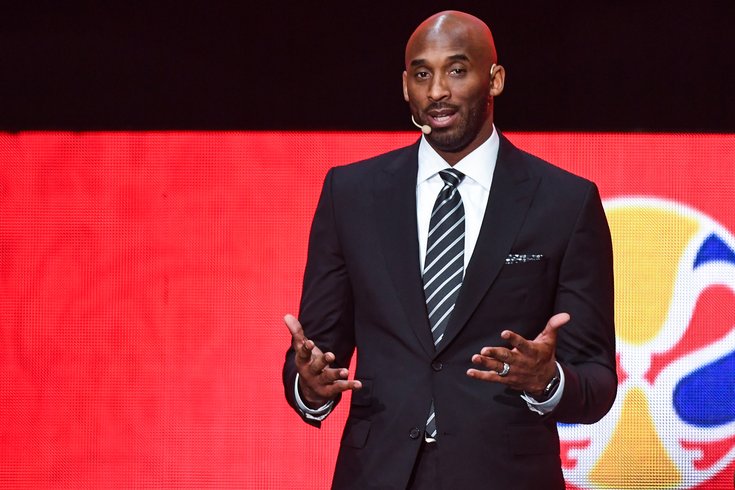 Tributes to the late Kobe Bryant continue to roll in across Philadelphia. Among the more recent, the Ben Franklin Bridge will be illuminated in purple lights in honor of the Lower Merion native.

The tributes honoring the late Kobe Bryant continued to roll in across Philadelphia and the entire country on Monday.

The Ben Franklin Bridge will be lit up in purple this whole week in memory of Bryant. The Delaware River Port Authority announced the plans to illuminate the bridge in purple on Monday, noting Bryant's connection to the Philadelphia area.

Bryant, 41, who went to high school in Lower Merion, and his 13-year-old daughter Gianna were two of the nine passengers killed in a helicopter crash in Los Angeles County, California, on Sunday.

Bryant, who played his entire NBA career with the Los Angeles Lakers, was a high school basketball star from 1992-1996 at Lower Merion High School on the Main Line. The five-time NBA champion led Lower Merion to the Pennsylvania state championship in his senior year.

The gymnasium at the high school is named after him.

"Mr. Bryant's connection to Lower Merion High School, where he played basketball prior to joining the NBA, has raised the profile of the high school and our district throughout the world," school officials said in a statement on Sunday.

Students at Lower Merion came out to honor their school’s alum in droves since news broke Bryant had been killed.

The Ben Franklin Bridge isn't the only Philly landmark to be lit up purple in honor of "The Black Mamba."  Citizens Bank Park, Lincoln Financial Field, the Wells Fargo Center—an arena where Bryant had many classic battles during his career with the Philadelphia 76ers—Boathouse Row, and skyscrapers in Center City will be awash in purple light, too.

LAKERS PURPLE in Philly:
I was just here for the @sixers/@Lakers game over the weekend hoping Kobe would make a surprise appearance. 😞

The @sixers are now planning to honor his legacy during tonight’s game. @6abc pic.twitter.com/OzbX5CSQ8g

💜 Philly is Lit Up Purple Tonight to honor Kobe Bryant!

A new mural honoring both Kobe and Gianna Bryant appeared in Los Angeles on Monday.

Rucker Park, a world-famous outdoor basketball court in New York City where Bryant once played a pickup game in 2002, wrote "8" and "24" with chalk on the court to honor him.

On Monday night, the Empire State Building was lit up purple and gold in honor of Bryant.

Taxicabs in Miami displayed the numbers "8" and "24" honoring Kobe Bryant on screens on top of the cars.

Taxi cabs in Miami (and around the country) are honoring Kobe Bryant. pic.twitter.com/gZDGjXPnJz

Alicia Keys and Boyz II Men paid tribute to the Laker legend in his home building, the Staples Center, on Sunday night during the 2020 Grammy Awards with an a cappella rendition of “It’s So Hard to Say Goodbye.”

“Here we are together on music's biggest night, celebrating the artists that do it best," Keys said. "But to be honest with you, we're all feeling crazy sadness right now. Because earlier today, Los Angeles, America, and the whole wide world lost a hero. And we're literally standing here, heartbroken, in the house that Kobe Bryant built.”

“We love you, Kobe,” Keys said at the end as the camera zoomed in on Bryant’s No. 8 and No. 24 jerseys illuminated from the rafters of the Staples Center.

Other tributes to Bryant during the Grammys included Run-DMC holding up his No. 24 jersey after performing "Walk This Way" with Aerosmith, a No. 24 jersey draped on a chair during Lil Nas X’s performance of "Old Town Road", and Lizzo declaring "This night is for Kobe" before singing her hit single, "Cuz I Love You."