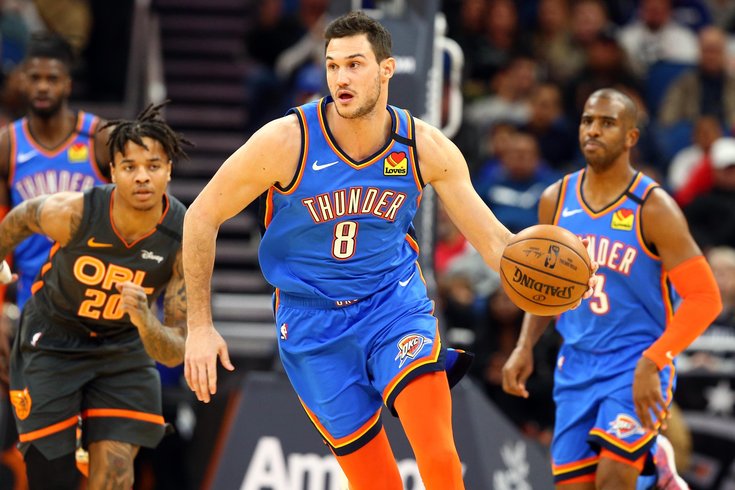 Oklahoma City Thunder forward Danilo Gallinari (8) drives to the basket against the Orlando Magic during the first quarter at Amway Center.

The Sixers have inquired about Oklahoma City Thunder forward Danilo Gallinari, according to a report from Kevin O'Connor of The Ringer.

While discussing the need for a potential third option to improve the Dallas Mavericks duo of Kristaps Porzingis and Luka Doncic, O'Connor dropped in this tidbit about the Oklahoma City forward:

Danilo Gallinari stands out as an option. Multiple playoff teams have expressed interest in the Thunder forward, including the Mavericks and Sixers, according to league sources. Gallinari is a potent scorer everywhere on the court, in any play type—whether he’s posting up, isolating, or in the pick-and-roll as a screener or ball handler.

Though Gallinari, 31, has never been an All-Star, he’s played like one this season in Oklahoma City and last season with the Clippers. Gallinari can become an unrestricted free agent this summer, but few teams will have cap space, and most of them will be younger teams unlikely to pursue players in their 30s. The team that retains him heading into the summer will have a significant advantage in keeping him since they’ll have his Bird rights, and thus the ability to offer a more lucrative deal. Dallas may not have enough assets to acquire Gallinari if OKC decides to trade him, but he’s a dynamic player that the team should pursue.  [The Ringer]

Of the trade rumors the Sixers have been caught up in so far, this one is perhaps the most interesting. As O'Connor notes, Gallinari has been one of the best offensive players in the league below the All-Star tier over the last couple of seasons, which brings us to the two questions we always ask about every trade rumor — what is the on-court fit, and is it feasible from a cost perspective?

Gallinari brings a level of offensive versatility the Sixers would kill for this time of year. After years of hovering in average to above-average range as a three-point shooter, Gallinari has climbed to over 40 percent from deep over the last two years, adding the final piece to a diverse and dynamic offensive skill set. At 6-foot-10, Gallinari has the height to shoot over just about anyone, which is a weapon for him whether he's spacing the floor for guards or taking smaller opponents down to the low block. He is one of the league's masters of keeping defenders off-balance, which helps him supplement his scoring with trips to the line.

That last bit is important within a Philadelphia context. Without Joel Embiid, their lack of foul-drawing prowess has become apparent, and while Gallinari likely wouldn't have the rope to be a high-volume free-throw shooter in Philly, he would help with some of their current problems. He's also comfortable moving in and out of roles as the team needs — when Tobias Harris was traded by the Clippers last season, it was Gallinari who took on a larger share of responsibility to keep L.A. in the playoff mix.

He is not of the same caliber defensively, but he has made significant strides on that end as well, and his time under Doc Rivers forced Gallinari into an assortment of roles night-to-night. Gallinari played small-ball center, guarded No. 1 perimeter assignments, and didn't back down from any challenges put in front of him. He is certainly below Philadelphia's elite tier of defenders, but he is not a walking target waiting to be exploited.

And that brings us to price, which is the part of this exercise that brings this whole thing down. We might as well start with the most important piece of information — Gallinari is on an expiring deal and making over $22 million, which means he is not gettable unless the Sixers decide they are blowing up the core they went all-in on last summer.

Elton Brand has not shied away from big moves and big pivots before, but that salary number can only be exchanged in a one-for-one swap if Philly sent Joel Embiid or Al Horford back the other way. The former is absolute lunacy, and the latter seems fairly unrealistic, as it doesn't do much for Oklahoma City and is a team-shifting trade for the Sixers. As much as Horford has looked old and bad at times for Philly, his acquisition was made with the Bucks on the brain, and swapping him out even for a very good player in Gallinari would bring a new set of questions to answer on their quest for a title.

In preliminary discussions leading into the deadline, my understanding is their focus has been on smaller, more realistic upgrades than a move of this sort, though it should be noted many of these discussions came before Josh Richardson's recent injury, whose severity is still unknown as of this writing. The Sixers have remained customarily quiet on the wave of trade rumors concerning the team in recent weeks, and GM Elton Brand has made it clear he prefers to operate in silence.

(Even if there was mutual interest in something like a Horford-for-Gallo swap, by the way, that would leave the Sixers in a precarious situation in the immediate term, forced to either rush Joel Embiid back or turn the keys at center over to a pile of uninspiring options. Kyle O'Quinn has been in the doghouse, Norvel Pelle's two-way days are up, and Simmons should not be playing more than spot minutes at center, given his already heavy two-way burden.)

There is a prevailing belief leaguewide that this is a seller's market. Without a clear-cut favorite at the top of the heap like the Warriors (you can argue that the Bucks are, but that is not necessarily how teams around the league are treating it) there are a lot of teams shopping around for the same sorts of players, perhaps even the same exact players in some instances. Gallinari is a player who would help just about any contender, but acquiring him without losing the pieces that make one a contender is a tough feat to pull off.

Even if the salary mechanics didn't complicate matters here, there would be reasons to raise an eyebrow at Gallinari being the supposed missing piece. He hasn't exactly been an iron man over the course of his career — he missed the entire 2013-14 season with an ACL tear, and his 68 games played in L.A. last season were the most he has appeared in since 2012-13. Gallinari has missed time for ankle injuries, hand fractures, and even a partial tear in his glute muscle, making him a risky bet as a "missing piece" type player.

Would Gallinari provide a shot in the arm offensively for a team that needs one? No doubt. He also happens to be the most unrealistic candidate of any name that has been floated so far, and this feels more like fantasy GM fodder than a credible option.

But as always this time of year, I suppose you can never say never.