Instant observations: Sixers lose Josh Richardson to injury and then lose to Raptors 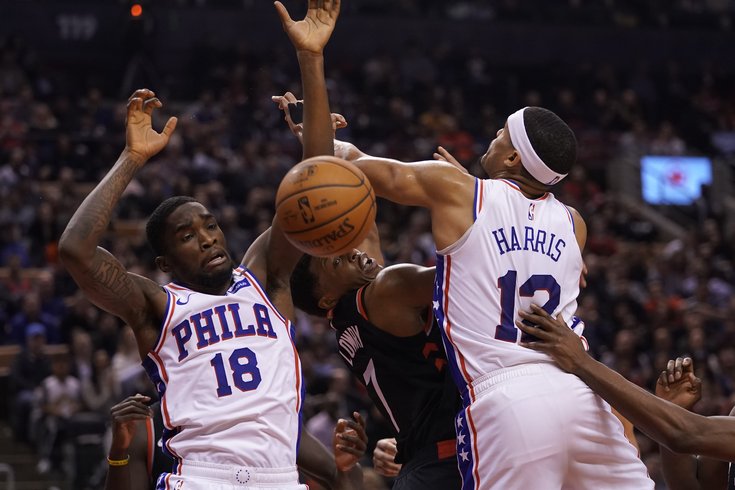 The Sixers fell flat, albeit shorthanded, in Toronto again.

The Sixers hung around for a lot of Wednesday's game against the Toronto Raptors despite losing Josh Richardson to injury, but they did not have enough in the end, losing 107-95 in yet another road defeat.

• After losing Josh Richardson to injury and Matisse Thybulle to foul trouble within the first four minutes of the game, it looked like the Sixers were being set up for another blowout loss in Toronto. A bunch of guys deserve credit for the game remaining competitive as long as it did, predominantly bench players who stepped up when needed.

We all know Furkan Korkmaz has been on a tear, but Shake Milton has been collecting dust on Philly's bench for most of this season, and he came in and knocked down a pair of threes in the first half, even mixing it up in traffic for a couple of tough rebounds. Mike Scott has been on everyone's bad side this season, but he was engaged as he has been all season on defense in the first half, picking up a steal and making a few smart rotations to help out teammates elsewhere.

Winning without Joel Embiid and Josh Richardson is a huge ask against a tough team like Toronto, but they had a puncher's chance, which is all you can really ask for.

• Korkmaz's offensive contributions have been highlighted over and over again recently, and I think it's only fair we give him some props for the strides he has taken on defense. He still has the same primary weakness — literally, he's not strong or agile enough — but his reads and awareness are considerably better than they were when he first came to Philly. Matched with the commitment to play defense, that makes him at least a passable defender at times, and every so often he will even make a big play there.

It's not the side of the game where he's going to hang his hat, but every little bit matters as they try to get him playoff-ready.

• The Raptors are a team that has given Ben Simmons trouble in the past, but those issues mostly came with Kawhi Leonard on the team, who absolutely tortured him with his wingspan and active hands. It was a bit of a surprise how poor he looked against Toronto on Wednesday, given the groove he is in and the fact that Leonard is now in Los Angeles.

Except Simmons' six first-half turnovers make sense when you consider the underlying causes for his success recently. The Sixers have taken off with Simmons playing off-ball and screening more, and without Richardson around to help run the offense, Philly had to dump a lot more responsibility back onto Simmons' lap against an opponent that knows his tendencies well.

It ended how you would expect — Toronto overplayed the pass a lot of the time, and they picked up cheap steals by just assuming he wasn't looking to attack. The downhill, aggressive Simmons we have seen so often never emerged in Toronto, and if you're looking for a reason they couldn't mount the final winning push, his regression ranks near the top of the list. With the Sixers unable to run as many actions involving Simmons as a screener, he reverted to the habits of stopping and looking to pass backward, getting stuck in mid-air, and all of the other things that drive people mad.

Perhaps that should say something about what has driven his recent success, and about the absurdity of the claims from people who believe they should trade Embiid. No, all of Simmons' progress is not a product of Embiid not being on the floor. No, they should not trade the best player on the team. This is about the situations the Sixers put him in with lineups and plays, and it has become abundantly clear they should be leaning into his skills as a forward, not a guard.

• Al Horford was another one of the players who stepped up for Philadelphia early on Wednesday, but he deserves his own space for his contributions against Toronto in the first half. Horford did all of the things you've heard people rave about for his entire career, making the extra pass, killing the Raptors from the midrange, and making his presence felt on the defensive end, where he looked like he had a bit more pep in his step from the start than he has had for most of this season.

Unlike Embiid, who has some difficulty when he has to expend a lot of energy closing on the three-point line, Horford is typically good at tracking down shooters and altering perimeter shots as they're going up. The Raptors struggled to get it going from deep early on Wednesday night, and Horford was a big part of that, in addition to standing guys up who wanted to try to post up near the basket. If that last bit looked familiar, it's probably from the nightmares Sixers fans still have of Embiid trying to go one-on-one with Horford on the block.

Unfortunately, well, they had to play the rest of the game, and Horford was absolutely useless for Philly down the stretch. All the ways he was good, including that paragraph listed above about his ability to contest jumpers, came crashing back to earth when the Sixers needed him to rise to the occasion in the second half. He once again looked slow and ineffective, and perhaps that should set off a few alarm bells regarding his long-term outlook. The more time that passes without consistent play, the more likely it is that a return to form is not coming.

• Thybulle's regression from downtown has been downright ugly, and it has put a damper on what has otherwise been a terrific stretch for him as of late. He was able to impact Wednesday's game in spite of his shooting issues, but looking forward, Thybulle's playability in a playoff setting will hinge on his ability to make open shots. He's probably not as bad as he has been since returning from injury, though he's probably not as good as he looked before the injury.

Thybulle's defense was terrific for stretches of Wednesday night's game, so I don't want to be too hard on him, but the cheap foul he took on a transition dunk for Toronto in the fourth quarter is one of the dumbest fouls any Sixers player has taken since I started covering the team. He had no chance to make a play, and it was a free and-one for the Raptors as a result.

• The biggest bone to pick with the head coach on the evening is the failure to make a meaningful adjustment to the rotation in response to the Richardson injury. Richardson has often been the guy who has been expected to carry the bench units lately, with the do-it-all-guard staying in basically the same spot as he was prior to Embiid's injury. Without him, the Sixers had to play lineups like the one we saw to start the fourth quarter: Neto-Milton-Korkmaz-Scott-Pelle.

Where I think Brown went wrong was leaving the starters in for so long in the third quarter, and not taking a timeout at some point in the final two minutes with Toronto surging. The Raptors closed on a 10-0 run, and that was a significant counterpunch in a game that was tight almost all evening. I would have preferred to see that five-man lineup (or a chunk of it, anyway) spell the starters and give them a chance to rest to close the third, opening the door to play the starters against a Raptors bench unit to open the fourth.

And here's the hilarious part — as bad as that group looked to start the fourth, they ended up winning those minutes by a point before Tobias Harris came in as the first reinforcement. The results were much better than the process deserved, let's put it that way.

• While we're on the subject of rotations, a lot of people seem to be mad that Trey Burke isn't playing. Trey Burke is not the difference-maker on this or any team, because if he was, they wouldn't have lost so many games in the same exact fashion with him playing.

The "debate" over who deserves minutes between Neto and Burke is a waste of time — neither guy is good enough to be the backup point on a contender.

• Normally I would be a lot more critical of a team that lost after a poor second half against a team they are jostling for playoff seeding with. But given Richardson's injury and the impact that had on the rotation, they just looked like a team that ran out of gas by the end. I will save my bullets for when their use is warranted.

• When Richardson pulled up lame around midcourt just under four minutes into the game, you knew something was up immediately. Waving to the Sixers to stop the clock and get him out of the game, they called a timeout at the earliest opportunity and whisked him off to the locker room, ruling him out for the rest of the game before the first quarter had finished.

That is obviously a terrible sign looking forward and not just how it impacted Philadelphia's rotation in Toronto. Richardson is a hard player for Philadelphia to replace because he does so many different things for this group. He can defend point-of-attack players, he can run pick-and-roll and hit pull-up jumpers, he's capable as a catch-and-shoot guy, and while you can replace individual pieces of that package with different players, there's nobody on Philadelphia's bench who is bringing all of those things to the table. Not even close, in fact.

The Sixers held things together with tape and paper clips on Wednesday night, but you'd have to think this is going to cost Richardson significant time moving forward. And while the looming trade deadline provides an opportunity to find help, teams will also know they are desperate for help if he's out for any period of time, and can potentially hold them over a barrel.

• Simmons contributed to his own issues all night, but one of the charges Kyle Lowry ruled against him, a play where Lowry slid underneath Simmons after he was already in the air, is the sort of play the NBA has to figure out a way to either officiate better or legislate out of the game. There is no attempt to actually play defense, and while fans of the Raptors will clap their hands over it, it does nothing but create danger/potential for harm for all parties involved.

While we're on the subject of dangerous plays, the Raptors got away with a bunch of undercutting in midair that could have ended in disaster for Philly. The league has cracked down on things like blows to the head, but letting guys off scot-free when they don't give guys space to land is ridiculous.