NBA Power Rankings Roundup: No Joel Embiid? No problem for Ben Simmons and the Sixers 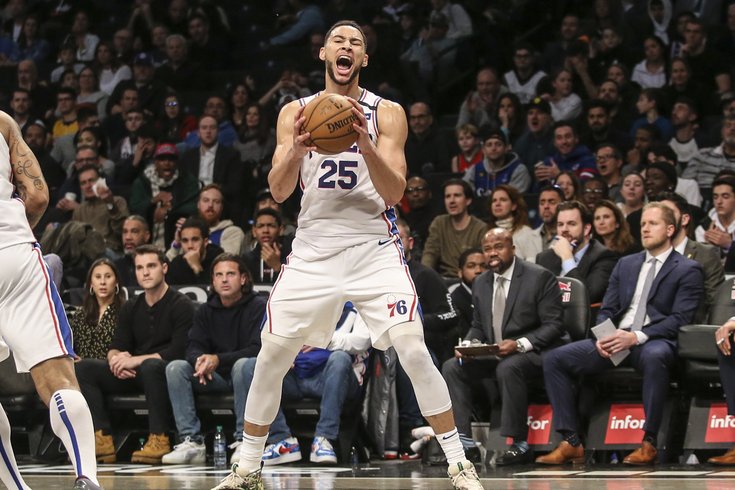 The Sixers have been playing without their superstar center, Joel Embiid, for just about two weeks as the big man recovers from surgery to repair a torn ligament in his non-shooting hand. And despite the absence of their franchise big, the Sixers have actually been playing much better.

After going 1-4 in their five games immediately following their Christmas Day win over the Bucks — all but one of them with a healthy Embiid — the Sixers have suddenly caught fire, going 5-2 since Embiid's injury, including four straight wins. That's come in large part thanks to elevated play from Ben Simmons, who was named Eastern Conference Player of the Week on Monday while in the midst of not only his best performance of the season, but likely the best of his career. Of course, there was also The Furkan Korkmaz Game.

And while they haven't seen themselves climb too much in the Eastern Conference standings — they've moved up one spot to fifth — they've seen themselves rise in more than a few power rankings around the internet.

With the Sixers (29-16) having an off day before facing the Raptors on Wednesday in a big game that will see the winner clinch at least a split of the season series, now is as good a time as any to check in on where the Sixers rank among their NBA peers in our latest NBA Power Rankings Roundup.

Let's start with the best rankings at the top and go from there...

The Sixers went 3-1 this week as they await the return of Joel Embiid. Offense has been a struggle at times, but they're winning games with their defense, with a sparkling defensive rating of 100 over their last four games. Ben Simmons continues to lead the charge with Embiid out, leading the team with 21.3 points, 9.5 rebounds and 7.3 assists over the last four games.  [Colin Ward-Henniger, CBSSports.com]

Breaking it down: If you watched the Sixers' defense against the Nets on Monday, you know what Colin is talking about. Philly absolutely smothered Brooklyn on the defensive end, and that went a long way to boosting their offense as they were able to convert on fast breaks and timely three-point shots when the defense collapsed on the ball handler, which was more often than not Simmons. He really did everything in that game, and will hopefully serve as a wake-up call to those who have been hesitant to consider the young guard a franchise centerpiece. If Simmons can play like he did on Monday on a consistent basis — not necessarily in terms of points, but in terms of disrupting the opposition and changing the course of the entire game — then it shouldn't matter that much how often he shoots.

Boston and Houston had bad weeks, and the Philadelphia 76ers got their act together. I don’t love that they struggled against the New York Knicks, but they still won the game. They lost their tough game against Indiana, but they prevailed against Brooklyn and Chicago, as well. Sixers have survived pretty well during the latest Embiid absence, and it looks like Simmons is playing better basketball. Tobias Harris is hitting some big shots. The Sixers are in a good place right now.  [Zach Harper, TheAthletic.com]

Breaking it down: Just like at CBS Sports, the Athletic's Zach Harper has the Sixers one spot better than they were a week ago. And while the struggles of Boston and Houston, who Harper has ranked immediately behind the Sixers, are clear, it's still impressive that the Sixers were able to climb without Embiid. We've already talked Simmons' play these past two weeks — that's going to be a common theme of these rankings — but Tobias Harris deserves some credit as well with his timely shooting for the Sixers. He also had a 34-point game (on 14-20 shooting) for the Sixers in their home win over Brooklyn last week.

Ben Simmons has been stellar in just about every way besides fourth-quarter scoring for the Sixers in Joel Embiid's absence and is averaging 21.3 points, 9.5 rebounds and 7.3 assists over his last four games.  [Noah Levick, NBCSports.com]

Breaking it down: More love for Simmons, deservedly so.

The three-game winning streak has not been pretty, but Philadelphia continues to succeed on the defensive end despite Joel Embiid's injury absence. In the three wins, Philadelphia held its opponents in the fourth quarter to an average of 17 points on 31.3% from the field and 8.0% from 3.  [Staff, ESPN.com]

Breaking it down: It's only taken three rankings and we're already outside of the Top 10, which is something Sixers fans likely wouldn't have expected heading into the season. After all, they were first or second across the board following their red-hot 5-1 start to the season. ESPN had the Sixers ranked 11th last week as well, and this writer has a feeling that if their rankings would've been posted after Monday's win over the Nets, they'd be in the Top 10.

Nice week for Furkan Korkmaz, who is in the midst of a relative breakout in his third season. Korkmaz has 56 points in his last three games, and he buried six threes in a win over the Bulls on Friday. For a team desperate for shooting help, Korkmaz’ emergence has been critical.  [Michael Shapiro, SI.com]

Breaking it down: Last week was a nice one indeed for Korkmaz, but after that three-game stretch, the Turkish guard went cold on Monday, finishing with just 10 points on 3-11 shooting, although he did hit some big threes down the stretch to keep the Sixers out in front of the Nets. Numbers aside, there's been a difference air of confidence around Korkmaz recently and it's been fun to watch. It looks like the bomber Brett Brown has been trying to grow is finally blossoming.

The Sixers have been held under a point per possession in three of their last five games, their worst stretch of offense of the season (103.1 per 100 over the five). On Monday in Indiana, an inablity to kick the ball out against a collapsed defense resulted in a couple of late-game turnovers. And in New York on Saturday, they went scoreless for a 4 1/2 minute stretch before Tobias Harris hit the go-ahead 3-pointer off of what appeared to be a busted inbounds play with less than 30 seconds left.

They've been pretty efficient when they've had six guys on the floor, but Sixers not named Harris or Furkan Korkmaz have shot 21-for-102 (21%) from 3-point range over the five games. Al Horford (registering career-low marks for both true shooting percentage and rebounding percentage) hasn't been able to find his way in the absence of Joel Embiid.

But, despite the absence of their Defensive Player of the Year candidate, the Sixers' defense has been stout (allowing less than a point per possession) as they've won three straight games. After Harris' go-ahead three, they not only forced a turnover, they ran off 20 seconds without allowing the Knicks to get anywhere near an open shot. With their first post-Christmas road win in hand, they have a big game in Toronto on Wednesday before playing their first game against either of the L.A. teams.  [John Schuhmann, NBA.com]

Breaking it down: I'm not sure what Shuhmann's problem with the Sixers is, but he dropped them from ninth to 12th despite them going 3-1 without their All-Star center. The Celtics, meanwhile, also fell three spots despite a 1-3 record last week. And the Pacers, who handed the Sixers their only loss and also went 3-1 climbed three spots.  ¯\ _(ツ)_/¯

Remember when we were all so curious about which team would finish No. 3 in the East because Milwaukee and Philadelphia seemed so certain to occupy the top two spots? The Sixers’ road woes (7-14 before Saturday’s game against the Knicks) and lack of dependable perimeter shooting have consigned Joel Embiid and Co. to an underwhelming sixth seed. That has spawned a much more unflattering question: Will the Sixers even have home-court advantage in the first round of the playoffs?  [Marc Stein, NYTimes.com]

Breaking it down: If the Sixers don't have home-court in the first round, Brett Brown will likely be looking for a new job in the offseason. Not just because they'll have fallen short of preseason expectations, but because they likely won't last long in the playoffs.

With Joel Embiid out, the Sixers continue turning to Josh Richardson in fourth quarters. No healthy Sixer averages more field-goal attempts in the final period, and so it shouldn't have been a surprise that he was the guy doing most of the scoring down the stretch of last Monday's loss to the Indiana Pacers.

He scored 17 of Philly's 26 fourth-quarter points in that one.

That was the only blemish in a 3-1 week for the Sixers, who got a career-high six made threes (including four in a two-minute stretch of the third quarter) from Furkan Korkmaz in Friday's 100-89 win over the Bulls.

Philadelphia is now 20-2 at home, and Saturday's dicey 90-87 escape in New York gave it its first road win since Dec. 23, halting a six-game slide on the road.

The process hasn't been pretty, but the Sixers' results without Embiid (5-2 since his injury) are satisfactory.  [Grant Hughes, BleacherReport.com]

Breaking it down: Satisfactory apparently isn't good enough, as the Sixers actually fell a spot in the rankings. Because the team that jumped was also the only team that beat them last week — and the Celtics fell two more spots than Philly — this isn't all that egregious.