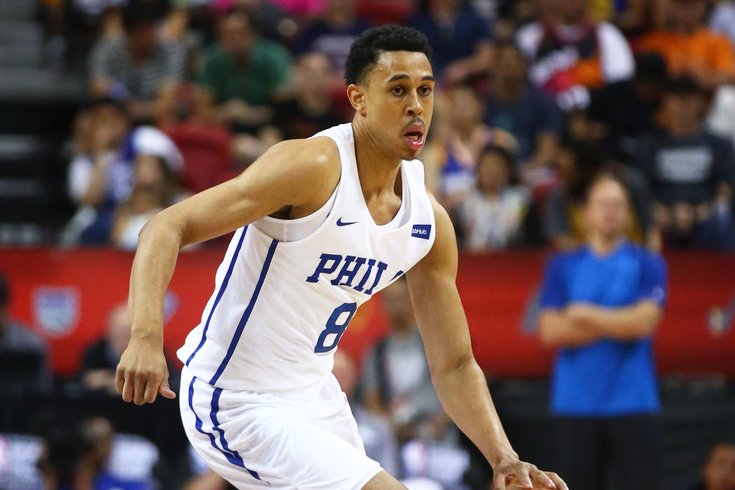 After going through a life-altering ordeal during his first NBA preseason, Zhaire Smith getting back on the floor during the 2018-19 season felt like a small miracle for the Sixers. But the work is far from over for last year's first-round pick, who is finding out quickly how tough it will be for him to get minutes on a potential title contender.

With the Sixers headed on a brief road trip over the weekend with stops in Detroit and Atlanta, Smith is staying behind in the Philadelphia area, the Sixers revealed to reporters on Friday.

(Sholler would follow up shortly after by noting that Pelle will travel with the team to Detroit and Atlanta, presumably in connection to Joel Embiid's questionable availability.)

And so the season will begin with Smith trying to separate from the pack in the G-League, rather than fighting for a spot in Philadelphia's rotation. Frankly, the writing has been on the wall for Smith for the last month now. Matisse Thybulle flew past him in the fight for wing minutes in the rotation, but even when you go past Thybulle, other young Sixers players have been given chances to earn a rotation spot over Smith, who was relegated to mop-up duty for most of the preseason.

Furkan Korkmaz, whose future in Philadelphia was so in doubt that his third-year option was declined by the team last fall, played 19 minutes in their opening win over the Celtics. To let Brett Brown explain it, the decision to go to the third-year pro is rather simple.

"I need to grow a bomber. Really, somebody's got to emerge where they're like lightning in a bottle that can come in and go bam, bam, bam, and make a three," Brown said after Wednesday's win. "So why not Furk?"

Smith has the potential to be many things, but a microwave shooter/scorer off of the bench is probably not one of them. It leaves him in sort of a predicament as he prepares for this new assignment — what is a realistic path for him to take in order to get into Philadelphia's rotation this season?

Each Philadelphia bench player currently in the rotation has a discernible role they can point to and a skillset they can hang their hat on:

The ideal version of Smith has an argument to replace two of those guys, Ennis or Korkmaz. The trendy name amongst Smith boosters after game one will be Ennis, who played one of his worst games ever against the Boston Celtics. But that's going to be an uphill battle for Smith, who would have to beat out a veteran Brown learned he could trust in a dogfight in the playoffs.

Asked about the opportunity in front of Smith and Philadelphia's other young guys headed to Delaware, Brown repeated an assertion he made to reporters before the season began. What can they gain from a G-League experience?

"Let's just start with playing," Brown said Friday. "They're not sitting on the sideline watching the starting five or the backup five play, they're playing. They're all so young that if it's my son, if I'm their coach, it all points back to — how do you play? So they're going to be in an environment where they're going to be playing more."

"The systems are very integrated, they're very closely connected with [Blue Coats coach Connor Johnson] who was my assistant, and the Blue Coats sort of attention we give from our side, the appreciation and the working relationship, same words, same system, the same type of philosophy, it's a great relationship. And I think it's beneficial for them."

Translation: if you want to see Smith lace 'em up anytime soon, Wilmington, Delaware is probably the best place to look.